Shipping’s Stake in an Ocean Clean-Up

Drawn from the palace for the event, the King of Norway looks more solemn than many are used to seeing him, as he walks the catwalk to bestow honors and the Nor-Shipping Young Entrepreneur prize on a young Dutch citizen. The 21-year-old Boyan Slat and his Netherlands-based Ocean Clean-up impress not just King Harald and the Nor-Shipping awards committee, but a mixed audience of 800 from the worldwide shipping community and Norwegian officialdom.

The Young Entrepreneur Award honors a person under the age of 40, “a professional who has founded a successful company to address maritime challenges in an innovative and new way.” The prize injects a bit of youthful appeal and wildcard relevance to a Nor-Shipping conference and tradeshow that attracted 15,400 visitors in 2015. The prize was juried in part by U.S.-based, clean-shipping protagonist, Carbon War Room.

Innovation
Slat’s invention is an “ocean curtain” that drapes for miles to trap plastic bags, six-pack rings and other garbage tossed by humans or carried by the wind into the sea. His technology targets “the removal of half the (trash in the so-called) great Pacific garbage patch.” The “patch,” by various accounts and estimations, is a continent-sized swirl of refuse circulating in perpetuity off the Western U.S.

“If you told me four years ago (during a summer school exchange) that next time I’d be back here accepting an award from the King of Norway I wouldn’t have believed it,” the poised, slightly giddy Slat says in a modest victory address that drew laughter and applause. He says he got the idea to do something about pollution when diving in Greece as a teenager and finding “more plastic bags than fish.” The idea that eventually spawned was “a very long floating barrier to passively concentrate the plastic,” since a clean-up using nets and boats would take “about 79,000 years and tens of billions of dollars.”

“We’ve been able to show that with this technology, 100-kilometer arrays deployed between Hawaii and California would clean up half the great Pacific (Ocean) garbage patch in 10-years’ time,” Slat asserts, adding that he’ll take the award as a sign that the Ocean Clean-up project “has the support of the shipping industry, which is obviously an important stakeholder in this project.”

Yet, in a note to Marine Technology Reporter, recent Chamber of American Shipping chief executive Joe Cox says that while the shipping community has committed to preventing pollution it doesn’t necessarily see “clean-up” as its role. “An owner would naturally question his responsibility to clean up (or pay for) another owner’s pollution,” Cox writes, adding that, “I also think there should be acceptance by all who have polluted. Commercial maritime has a degree of responsibility; although so do other maritime users such as fishing, some land-based industries, (boaters, etc.).”

Cox wasn’t briefed on Slat’s invention and couldn’t comment, but he offered some caution. “An award given by an organization does not indicate universal support.”

Garbage Collection
Slat dropped out of his Aerospace Engineering studies to found The Ocean Clean-Up and begin an entrepreneur’s clamoring for funding and development. In 2014, he became the outfit’s founder and chief executive after a crowd funding effort raised $2.2 million, or enough for a technology pilot to launch the platform-and-boom idea. Delft University in the Netherlands had already awarded the concept Best Technical Design, one of several honors awarded Slat in 2014, including a United Nations Champion of the Earth laurel.

The ocean clean-up installation — a two-kilometer prototype of which is due to deploy in 2016 — allows current to carry sea life beneath a boom while trapping buoyant garbage, especially plastic. It’s not known how effectively it’ll perform either operation over a many years, but its component materials have been researched. Part of the system envisions a trash-munching platform that lifts garbage out of concentration and into a silo for removal and destruction. No specific maintenance or support vessel is understood to have been selected to work the long stretches of oceanic garbage collection.

“The scalable array of floating barriers attached to the seabed (are) designed for large-magnitude deployment, covering millions of square kilometers without moving a centimeter,” Ocean Clean-Up literature says. Its researchers — including volunteers — suggest a 100 km section swept by ocean currents for 10 years would remove 42 percent of the great Pacific garbage patch. This area of spoiled sea and Slat’s idea have both received plenty of press and criticism since about 2012. Biologists have expressed the worry that the Clean-Up array could kill sea life. Blatt’s adherents point to the prize: much less ocean trash.

“We conservatively estimate (the size of the mess to be) 70,320,000 kilograms,” the start-up says of the Pacific garbage patch. After a 400-day engineering study that attracted 100 engineers, a clean-up cost of €4.53 per kg was arrived at. A fact sheet says the feasibility study concluded only that the concept “likely is a feasible and viable method for large-scale, passive and efficient removal of floating plastic” from the Pacific garbage patch.

Contributing scholars, including Slat, say most ocean plastic is suspended in the top three meters, where it will be trapped. Computer simulations and a 40-meter-long mockup strewn across the Atlantic showed plastic does travel along the barriers, and there’s no accidental catch of “naturally buoyant” sea fauna. Slat and his engineering partners have tested the underwater performance of the concept, and found the right amount of gravitational and centrifugal force to separate zooplankton and tiny plastic particles without harming the former.

Some company literature can sound as alarmingly dismissive as the shipping industry attitudes of the 1960’s that Cox described. “The environmental impact of the concept is negligible,” one text relays, and “No major legal hurdles have been identified.” Assurances are given that the plastic collected is recyclable and that the silos can be emptied every 45 days from a giant platform powered by 162 solar panels.

“The question I have is about the amount of garbage and types, i.e. who are the polluters? Also, where would the garbage go? Who would accept it,” asks Cox.

Whatever the language of Ocean Clean-Up’s concept, the worthiness meter is off the scale. As if the Pacific pile-up wasn’t enough, five areas of converging currents in the world’s oceans, called gyres, are fast filling with junk. That’s not all: “While the debris primarily collects (in the five gyres), it doesn’t just directly kill sea life, but due to the absorption of PCBs and DDTs, also poisons the food chain, a food chain that includes us,” Slat says.

Ocean Experience
In his letter, Cox affirms shipping has come a long way in its attitudes. The Blatt award merely affirms 2015 is not the 1960’s, a time when “deck gangs did throw things overboard.” Cox admits to being one of those deck hands who thought, “It’s such a large ocean and this piece of detritus I have in hand won’t do much.”

Slat says seafarer, offshore industry and tourist education and manual collection have fallen short, and that it’s time for the ocean “to clean itself” using the Ocean Clean-Up solution. While no known net size will trap the smallest pieces of plastic, the smallest mesh size (used in Clean-Up) does and while letting microorganisms pass through. Plastic bits, large and small, are eventually eaten by the 24 platforms envisioned in Slat’s first, full-scale pilot. In a presentation of his ideas, Slat refers to a maritime accident during which six cargo containers of plastic spilled into Hong Kong harbor in 2012. “The largest oceanic plastics spill ever” would be easily munched up by his Clean-Up array. The full-scale version could clean “55 containers (of spilled plastic) per day.”

For the shipping industry – his new “stakeholder” – Slat points to the “$1 billion” a year in ship damage caused by floating plastic. That junk would be recycled and sold for $500 million, the “payback” for a plan of execution Slat puts at €300 million. Sounds like a worthwhile business proposition.

Meanwhile, CEO Slat and his supporting cast of researchers and volunteers — now an ocean-experience enterprise (pay to be a part) and a mass movement organized by social media — have ploughed another barrier into the densest reaches of the great brown Pacific gyre. In tow behind their sail boats, the plastic traps have shown that design and operational costs might come down, after it was found a shallower barrier also collects garbage.

This summer, another Slat-led expedition heads for Bermuda, the Azores and the North Atlantic Garbage Patch. For aspiring engineers with sea legs, Slat says he’s hiring: two design and structural engineers; a hydrodynamic engineer and a finance intern. He’s also looking for volunteers with specialist training, including communications.

Whatever one thinks about Slat, his “solution” or the high-profile support and coverage he’s received, no better ideas have appeared to clean things up. The shipping industry might be partly on board, but other coastal industries — offshore energy or aquaculture — might want to pitch in with an award of their own. As Cox said, who are the polluters? 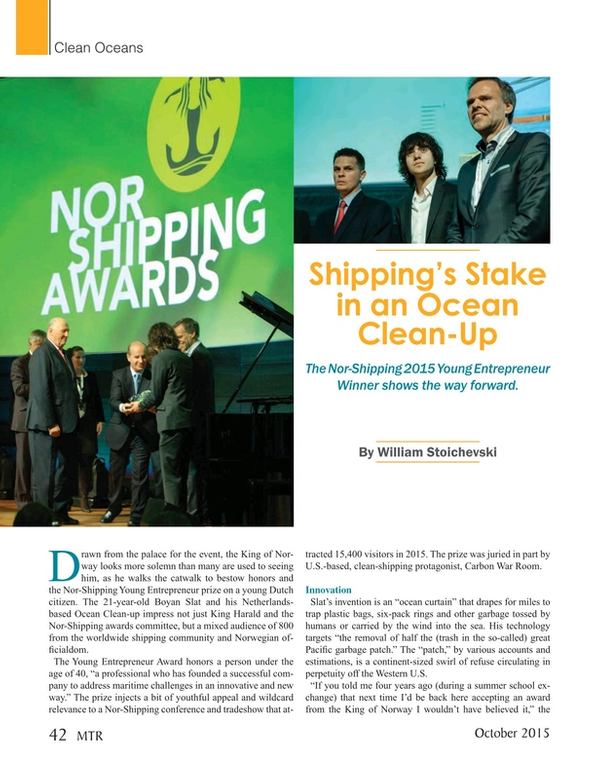