Due to its simplicity, the rim driven thruster has for years been seen as the ideal thruster concept, but it has proved to be difficult to implement. Several attempts of implementing the rim driven thruster concept has failed over the years, but due to technological advances in materials science and production techniques, Copenhagen Subsea A/S reports that it has succeeded in implementing the concept resulting in an ultra-reliable thruster with unique features.
Due to the extreme harsh environment to which a subsea thruster is exposed – the realization of the rim driven concept has involved the utilization of materials with very specific characteristics. The development team behind the thruster has many years of experience with subsea equipment but had to look at other industries in order to find the right combinations of materials and production techniques, which could give the right compromise between reliability and performance required in the subsea industry.
Today one of the limiting factors in the utilization of ROV and AUV is the reliability of the thrusters. The thrusters are equally critical to the ROV operation as the rest of the sub-components - but due to the complexity of the thruster coming from moving parts; it is harder to achieve the same level of reliability as can be achieved in the non-moving parts of the system. The reliability of thrusters used in the ROV industry today is also a result of the small batch sizes in which they are produced. Copenhagen Subsea says it has successfully developed a series of industrialized thrusters with a significantly higher level of reliability. Features of the Rim driven ROV thruster include:
•    Low Acoustic Noise Signature: Due to the fact that the rim driven propeller has a low tip speed of the propeller blades the noise emission from the propeller is significant lower than a normal propeller. Beside the propeller, the motor has no gears or other mechanical moving parts.
•    Lightweight Propeller: Means that the moment of inertia of the thruster is small, which makes it fast to change the rotational speed of the thruster.
•    Compact Form: The thruster is easy to integrate and the thruster has the same thrust in both directions.
•    Fluid Free: There is no oil or other fluid inside the thruster.
•    Hub-less Propeller:  This gives the advantage of a low risk of entanglement. Small fractions of rope and seaweed can pass through the center of the thruster. 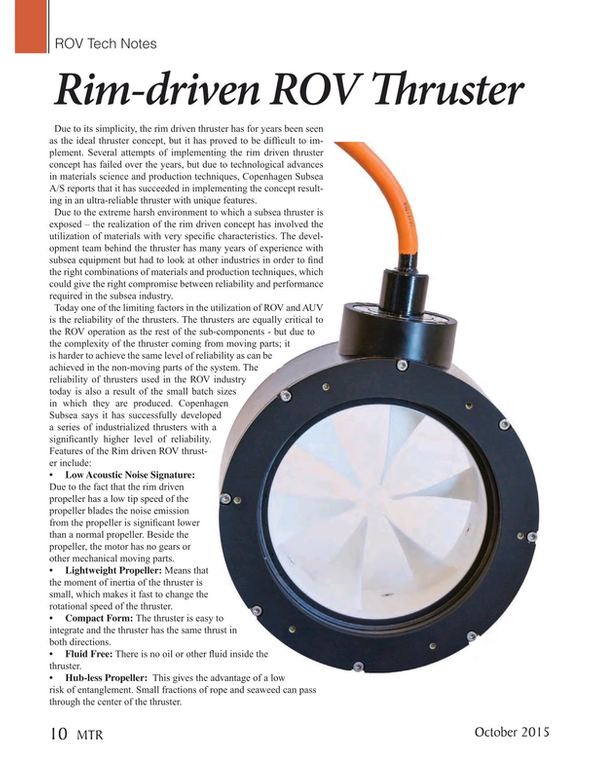