SUPR-REMUS: The Next Generation of Plankton Sampling

A vast number of marine animals live a sedentary existence or with limited mobility as adults. For these individuals, it is the dispersal of larvae that determines the settlement of future populations and the structure of ecological communities. Plankton research is hindered by observational difficulties, as traditional sampling methods fail to identify fine-scale distributions while accounting for changes in environmental gradients. Now, a group of Woods Hole Oceanographic Institution (WHOI) researchers and engineers have developed an innovative new system for sampling small planktonic larvae in coastal ocean waters, offering novel insights into the intricate world of plankton dispersal and demographic connectivity.

While species in larval stages have limited dispersal capabilities, many are able to influence their horizontal distribution by controlling their vertical position, affecting transport and spatial distributions on bottom habitats. For scientists, determining the fine-scale distribution of individuals in the water column, relative to environmental gradients such as temperature, salinity and circulation, reveals mechanisms of larval transport.

While understanding demographic connectivity in marine environments is crucial, research on larval dispersal has been hindered by the microscopic size of marine larvae and the inability to accurately observe their movements in large expanses of water. Furthermore, while distributional patterns and behaviours are species-specific, larvae are difficult to identify with traditional methods and knowledge on vertical distribution and behaviour is lacking for most species.

Historically, traditional sampling techniques such as nets and bottle samplers have provided essential insights into the distribution and abundance of plankton species. The limitations with pumps and nets used today are that they require sampling at predetermined stations or towing nets behind a ship. Samples using these methods combine organisms collected throughout horizontal or vertical tracks, making it impossible to detect small gradations or species-specific patterns in larval distribution.

“It is difficult to get fine-scale larval distributions in the field. For vertical distributions, the “MOCNESS” plankton net sampling system has been used, but this system works for open ocean areas, not shallow coastal waters. Also, larval distribution patterns may be species-specific, and it is very difficult and labor-intensive to identify larvae using traditional morphological examination under a microscope,” explains Annette Govindarajan, Research Specialist at the Woods Hole Oceanographic Institution and lead author of the paper.

The need for autonomous larval sampling that can respond to environmental gradients is crucial for progressing this area of research. Adaptive sampling of this kind would greatly facilitate studies of larval transport, a process dependent on larval behaviour and physical variability.

Therefore, advancements in current sampling methods is required that can resolve these spatial scales and take multiple samples in the field.

The main objectives of the study were to couple the Suspended Particulate Rosette sampler (SUPR), designed by co-author Chip Breier for deep sea biogeochemical sampling, with a REMUS 600, and use this system to obtain the vertical distribution of barnacle larvae in Buzzards Bay.
“Plankton nets that take discrete samples, such as multiple opening-closing systems, are meant for use in open water,” said Govindarajan. “Our goal was to sample in shallow water, and close to the bottom for larvae of coastal benthic invertebrates.”

The team modified the SUPR sampler to fit in the front section of a REMUS 600, with additional foam and weights for buoyancy and trim. A flow meter measured seawater volume, which was pumped through external ports at predetermined times, and multiple 200um-mesh filters retained the plankton from separate samples.

The researchers targeted barnacles because their reproductive biology is well known, and the scientists knew when and where larvae would be abundant. Adult barnacles are sessile, but the planktonic larvae travel and disperse with water movements. Several barnacle species co-occur in coastal Massachusetts waters, but little is known of how their larvae behave and distribute differently in the water column.

“Our new system, dubbed “SUPR-REMUS” can be used to obtain vertically discrete samples in shallow coastal water, unlike any other method. We programmed SUPR-REMUS in advance to initiate and terminate sampling at specific times. While sampling, REMUS collected environmental data including temperature, conductivity, and depth,” explains Govindarajan. “SUPR-REMUS lets us take discrete samples, in a way that nets can’t in shallow water areas.”

Last March, the team launched the SUPR-REMUS to conduct transects perpendicular to the coastline. On the first mission it travelled between the surface to about 15m depth in a sawtooth (“yo-yo”) vertical pattern over a 9.9 km distance. The second deployment was more complex: the AUV’s upper and lower track boundaries were programmed relative to the surface and to the seafloor, over 11.2 km distance.

“The deployments were challenging as the weather at the time was frigid, but we were very pleased with how SUPR-REMUS performed,” said Govindarajan.

“The system worked well for collecting barnacle larvae, many of which was collected and used for genetic analysis. We had timed the deployment to coincide with the time of year when we knew the larvae would be abundant. However in the future we would want to consider increasing the flow rate to sample more dilute taxa.”

The work so far demonstrated the feasibility of using an autonomous vehicle based sampling approach. This new method has the potential to collect larvae of other invertebrates as well as zooplankton, and together with genetic identification, overcome many existing limitations, offering the potential of valuable new insights in understanding larval distributions and transport dynamics. 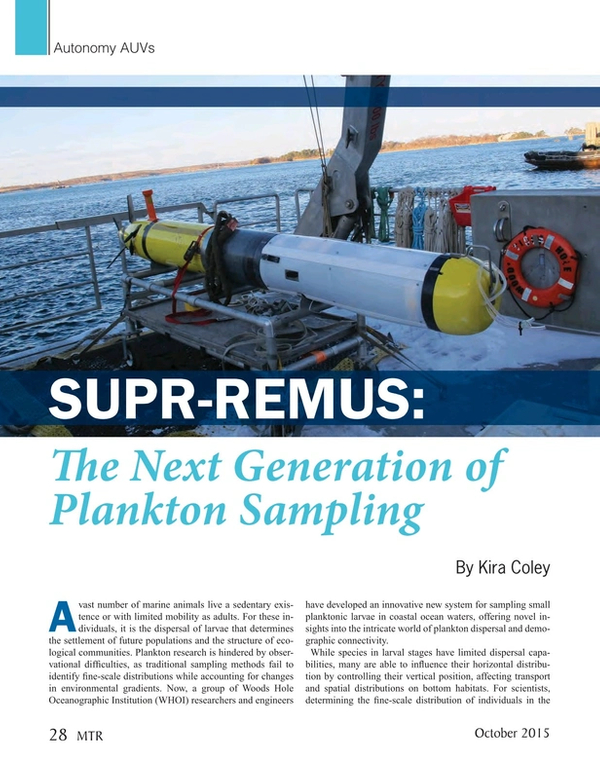 Read SUPR-REMUS: The Next Generation of Plankton Sampling in Pdf, Flash or Html5 edition of October 2015 Marine Technology