A panel of four members of the offshore drilling industry was present on the evening of December 11, 1973, at the U.S. Merchant Marine Academy to discuss and answer questions concerning the career opportunities in this rapidly expanding field.

The evening was arranged as a general information session for an audience of some 400 third and fourth-year midshipmen who will be choosing a career in the near future.

Taking part in the panel were John Davis, the Chief of the Office of Ocean Domestic Shipping for the Maritime Administration's Research and Development branch; Capt. William Mayberry, USCG (ret.), the executive director of the Offshore Marine Services Association ; H. Edward Denzler, consultant to the International Association of Drilling Contractors, and Dave Downs, a member of the Offshore Company.

The evening opened with a slide presentation by Mr. Davis, who traced the development of offshore drilling techniques from the crude wooden platforms used off the coast of 'Mexico in the 1930s to today's multimillion dollar jackup, semisubmersible and drilling ship operations. He stressed the importance of offshore oil drilling by revealing that a 40-year supply of oil and natural gas lies untapped under the ocean, with 30-billion barrels alone under the North Sea.

'Logistic support of the offshore drilling operations was the subject of Captain Mayberry's talk. Revealing that the field presently has the need for 800 to 1,200 licensed officers to man support vessels for the rigs, Captain Mayberry expressed the belief that the manpower shortage would continue for at least another five years, due to the tremendous growth of offshore drilling. He also stressed the need for well-trained shoreside operation managers for the industry, which touches all corners of the world.

H. Edward Denzler spoke next about the job requirements for both the construction of the semisubmersible and flat drill ships, as well as the on-location crafts necessary aboard the rig. A variety of skilled personnel are required, he stated, ranging from electricians to engineers to drilling specialists.

Life aboard the drilling vessels was brought home to the audience by the final speaker, a 1972 Academy alumnus who worked aboard a semisubmersible drill ship in the China Sea. Mr. Downs served aboard the Discover II as a junior officer in 1972 for the Offshore Company. He used his own experience to describe the work and hours involved, as well as living quarters and personal relationships aboard ship.

All the members of the panel stressed the importance of offshore drilling as a viable means for combating the impending oil shortage.

They emphasized that the Academy training program well prepared its graduates to enter the offshore field.

The U.S. Merchant Marine Academy is a national institution, a part of the Maritime Administration of the Department of Commerce. 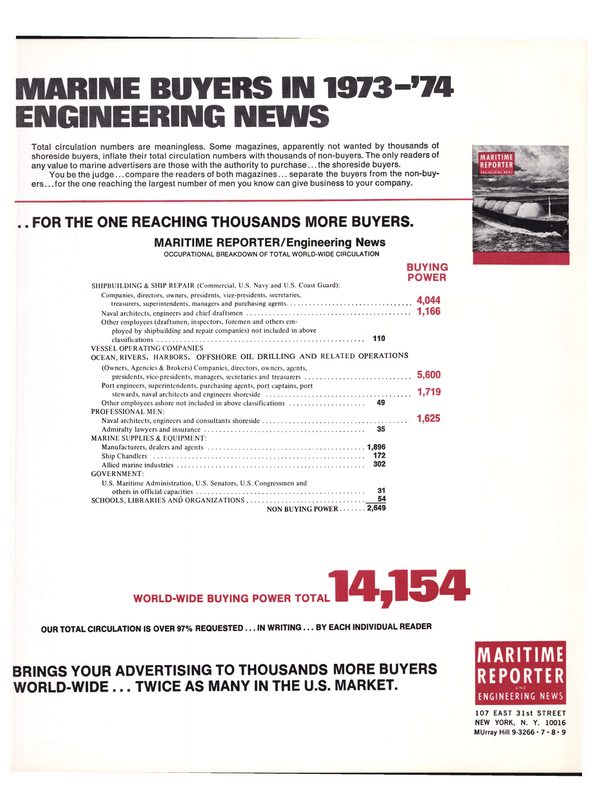