The rapid momentum of American shipbuilding-, initiated with the enactment of legislation in 1970 (the Merchant Marine Act of 1970), designed to restore the United States to a position of prominence and substance among world maritime powers, continued to accelerate in 1973.

International economic and monetary developments, in conjunction with cost saving emphasis domestically, have furthermore prompted an eventful and partial closing of the differential between U.S. and foreign shipbuilding costs and prices. New lows in levels of Federal construction subsidy support for tankers and liquefied natural gas (LNG) carriers have thus resulted during 1973. For the same reasons, many U.S. yards received merchant ship repair work which otherwise would have been done abroad.

During the year, merchant ship construction contracts totaling 38 vessels of 2,636,000 dwt have been placed with American yards. The aggregate value of these orders is estimated at slightly more than $1.5 billion. About 40 percent of these contracts are supported by Federal subsidy funding. In addition, U.S. shipyards have on order contracts for 35 offshore oil drilling rigs; Simultaneously, appropriations for U.S. naval ship construction reached a new high of approximately $3.5 billion. Most of these funds have financed the cost of incremental stages of earlier building contracts for submarines, destroyers, aircraft carriers and other vessels, including sophisticated electronics and armaments. Only one procurement for a new naval ship program was awarded in 1973: the lead ship contract of a 50-ship innovative Patrol Frigate (PF) program. Also, a greater volume of Navy ship repair work has been placed with shipyards in the private sector.

This crescendo of activity has contributed to an unprecedented peacetime backlog of work in U.S.

shipyards. Capital improvements have increased substantially. Capacity has been improved accordingly, and additional expansion of production facilities has progressed beyond the planning stage. Productivity of individual shipyard workers has reached new levels of proficiency and is said to be on a par with that in other countries.

On the other hand, profit margins, in many instances, have left much to be desired.

U.S. tanker building capacity, in particular, is anticipated to expand further from the present annual level of approximately 1,500,000 dwt to considerably more than 3,000,000 dwt in 1978. Some of this capacity will be devoted to the construction of very large crude carriers (VLCC's) of 400,000 dwt or larger, and a maximum eventual output of six or seven VLCC's annually would not seem unrealistic.

Along with the balance of American industry, the U.S. shipbuilding industry, at the start of the New Year, faces an array of problems, challenges and opportunities far different from the past. More and more, the conduct and planning of shipyard activity will be influenced by energy and environmental considerations as well as by geopolitical, economic, governmental and •management actions.

The report of the Commission on American Shipbuilding, released in mid-October, concluded that the U.S. shipbuilding industry, given "the opportunity to build ships in series" and "a reasonable stability in its orderbook," is "fully capable of equalling the production efficiency in any foreign shipbuilding industry for the construction of similar ships." This Congressionallymandated, Presidentially-appointed Commission was chartered in 1970 to "review the status of the American shipbuilding industry, its problems and its progress toward increasing its productivity and reducing production costs." The verdict was unqualifiedly complimentary in terms of shipyard operations and technology, capital improvements, productivity, and labor- management relations.

The importance of ship financing to ship construction was especially emphasized by the Commission.

The "U.S. Ship Financing Package," it was stated, "is substantially better than any alternative financing available for the construction construction and acquisition of foreign built ships." Domestic and foreign groups have to date combined and employed this "Package" in an effective manner. Desirable contracts for U.S. shipyards have resulted.

Other prospects are now in various stages of negotiation, and should soon materialize as firm orders.

Even more, the Commission's report supported the concept of a limited cargo preference for U.S.

Out of the Yom Kippur conflict in the Middle East, the concurrent posture of U.S.-NATO relations, and the ensuing Arab oil boycott, the inherent belief that the United States must establish and maintain positive control over a reasonable portion of available transportation resources has re-emerged in public view with substantial impact. Potential future effects in terms of tanker requirements and new building are now being realistically weighed.

Shipbuilding opportunities in the United States will, of course, continue to have a direct relationship to the prosperity, reliability and stability of the American flag merchant marine, to the expanding missions of the United States Navy, to requirements for oil and gas tankers to transport energy supplies from Alaska and elsewhere, and to needs for specialized vessels and floating equipment (drilling rigs, barges, mining ships, research vessels, and so on).

Shipyard management objectives, financing and contract conditions, production planning, steel throughput, material and component availabilities, existing workload, and other factors, will continue to govern decisions of individual shipbuilders to participate in these kinds of markets and to undertake additional contracts.

Nevertheless, American shipyards remain firm in the conviction that capacity will expand in direct proportion to demands for new ships and that the 1973 impetus will carry the industry on to greater accomplishments in the coming year. 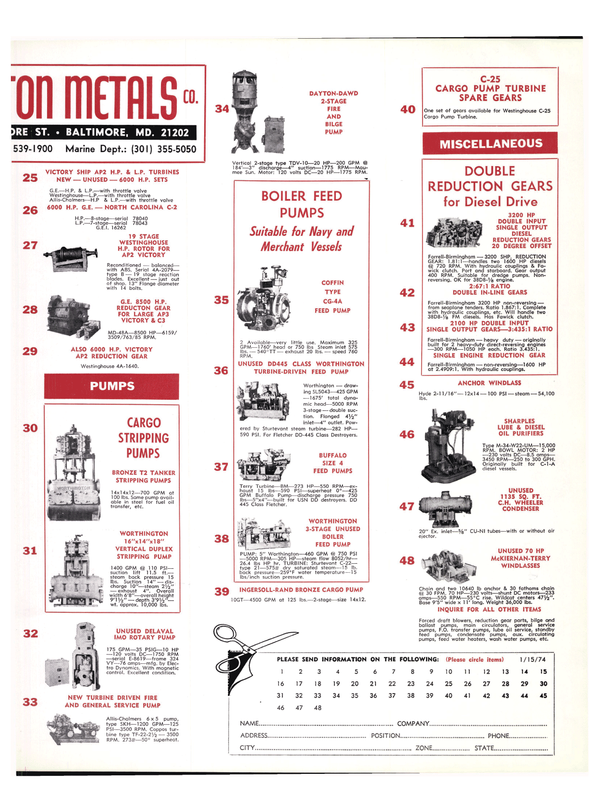