Marine Industries Limited shipyards at Sorel, Quebec, was recently the scene of the christening and delivery of the 15,600-ton cargo vessel Creuse, second of five multipurpose containerships to be built for the Societe Navale Chargeurs Delmas-Vieljeux, one of the largest shipping companies in France.

The Creuse is an identical copy of her sister ship, the Cotes du Nord, completed by Marine Industries in August 1973. The ships are intended for two-way trade between Northern Europe and the countries of Africa.

The traditional bottle of champagne was broken against the new sophisticated vessel by Mme. Jean Velitchkovitch, wife of the Secretaire General of the Marine Marcliande.

The Creuse, named after a geographical region of France, is designed to carry containers and is reinforced to transport logs, while being readily adaptable to handle grain and/or ore in bulk. Outward bound, her main cargo will consist of European - built automobiles, construction materials, machinery and other commodities. On the return journey, she will bring back coffee, cocoa, logs, grain and other tropical products.

Marine Industries' order book includes, among others, contracts for two other similar vessels to be built for the Compagnie Maritime des Chargeurs Reunis.

This series of seven multipurpose vessels being built by Marine Industries Limited is the largest contract ever negotiated between a French buyer and a Canadian supplier. The transaction was made possible by the Federal Department of Industry, Trade and Commerce's Shipbuilding Temporary Assistance Programme, and by long-term credit made available by the Export Development Corporation.

The Creuse left Sorel after the ceremonies and was placed in service immediately. 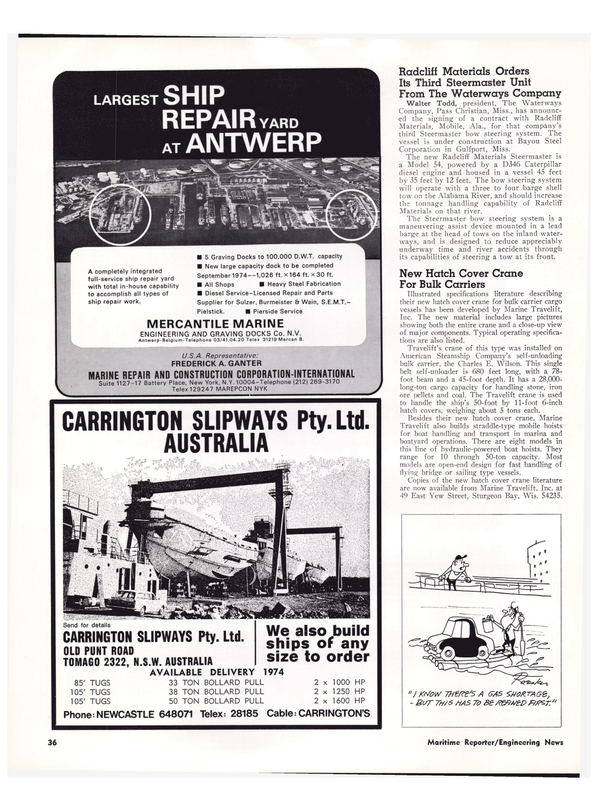