For the first time since 1965, the Defense Appropriations Act contains a provision allocating a specific percentage of Navy ship repair funds to private shipyards. The provision in the fiscal 1974 Act (H.R. 11575) calls for a 70/30 split of Navy ship repair, alteration and overhaul work between naval and private yards. Although this is a lesser percentage than that mandated Iby the 65/35 provision of the fiscal 1963, '64 and '65 Acts, it will actually mean more work for private repair yards, because excluded from tbis year's provision are the large conversion jobs (accomplished in three or four Eastern yards) that usually ate up a major portion of the funds provided under 65/35. Under the new 70/30 provision, private yards in fiscal 1974 will be allocated approximately $360 million in Navy ship repair, alteration and overhaul work, more than twice the $179 million received in 1973.

Passage of this legislation, which is of such great importance to the welfare of the private shipyard industry and hundreds of related industries and suppliers on the West Coast, climaxes a year-long effort on the part of Western Shipbuilding Association. During this time WSA officers, directors and many members communicated by letter, wire, telephone and other means with every member of the U.S.

House of Representatives and Senate, stressing the great need for this legislation, its importance to the nation's economy and security.

Many factual statements and documents were prepared and presented to Administration officials as well as members of the Congress.

Language of the 70/30 provision, which is included under Title 3 of the Defense Appropriations Act, calls for "no less than $851,672,- 000" in Navy ship repair funds to be spent in naval shipyards and "no less than $359,- 919,000" in private yards. The amount designated for private yards is approximately 30 percent of the total $1.2 billion appropriated for Navy ship repair, alteration and overhaul work. This is the actual percentage of Navy ship repair funds that Navy spokesmen had earlier in the year told members of the House Appropriations Committee would be spent in private yards during fiscal 1974. Despite the promises, however, Congressmen with naval shipyards in their districts made strong efforts to have the provision deleted from the Act.

Representatives Glenn R. Davis (R.-Wis.) and George H. Mahon (D.-Texas) were in the forefront of the adherents of 70/30 legislation.

At one point during floor discussion of an amendment that would have deleted it, Congressman Mahon questioned Navy credibility, when he said: ". . . at times, the military services have considerable resistance to the desire of Congress to have control over the purse strings. The question of credibility arises here.

Navy witnesses appeared before the Committee— and it is printed in the hearings—they said in July and they said in September, 'We are going to give aJbout 70 percent of overhauls, repairs and alterations to Navy shipyards, and we are going to give about 30 percent to the private yards.' They said it and resaid it . . . therefore, why do we have this amendment, since the Navy is going to do it anyway? This sort of tests the credibility of the Navy, I say, if we cannot depend upon the armed services to be square with us, it is time we were learning that they cannot be relied upon to give us the facts." Congressman Mahon, commenting further during debate on the issue, said: ". . . what we have simply done here is to put the imprimatur of the Congress on the decision of the Navy as to the way it is going to divide the repair and alteration work to be done in fiscal year 1974. So, I am amazed that there would be so much interest in this by all the people from the naval shipyard areas, and there are eight of them. They do have a special interest and I do not blame them for being concerned, but we are all concerned about the maintenance of an adequate public yard program.

We have these eight public yards and we want to keep them, and so we simply say in this amendment (70/30 provision), 'Navy, you go do what you told us you are going to do.' The committee proposes to hold the feet of the Navy to the fire." In responding to critics of the 70/30 provision, the Texas Congressman went on: "I think the Navy end runs the Congress too much. I just want to say that I do not have any shipyards, public or private, in my inland area. However, I do have a sense of fairness and I do hope this amendment will be voted down with a resounding vote. This will convince the Navy that making end runs, by telling the committee and the Congress one thing, even putting it in black and white in the hearings, and then trying to get it changed will get them nowhere. I want to warn the Navy that this type of tactics has to stop and the committee will not put up with it." The amendment to delete the 70/30 provision was defeated in the House by a vote of 203 to 170, a majority of only 33 votes. As noted above, passage of the measure was not without tremendous opposition from Congressmen with Navy shipyards in their districts.

From the vote in the House, it is well evident that Representatives hailing from such districts on the Pacific Coast were highly successful in convincing fellow Congressmen from their own state delegations—people without Navy yards, in fact, many with private yards in their districts—to vote against this measure that is so essential to the welfare of the private ship repair industry. Congressmen from Oregon, where there is no naval shipyard, were unanimous in support of the 70/30 provision, but in Washington only two out of seven votes —Brock Adams and Joel Pritchard—were cast in favor of the measure. In California, where two naval shipyards are located, the vote was overwhelmingly lopsided, with only six of 43 Congressmen—William S. Mailliard, Paul N.

In the issue, an important matter of Government competition with private industry, the heavy vote against private enterprise in the California and Washington Congressional delegations is disappointing-, at the very least. It is evident that many WSA members either did not contact their Congressmen when requested to do so, or were unable to convince their representatives of the merits of more Navy ship repair work for private shipyards, the positive impact it will have on the sorely depressed industry and hundreds of related industries as well as the employment picture in this area.

Since this issue must be voted on each year, Western Shipbuilding Association members should be prepared to work toward changing this disappointing voting record of their elect elected delegates to the Congress. It is simply a matter of contacting these people and letting them know what the situation is in your own area and what this will do to aid this industry, the survival of which is essential to the economy and security of this nation. 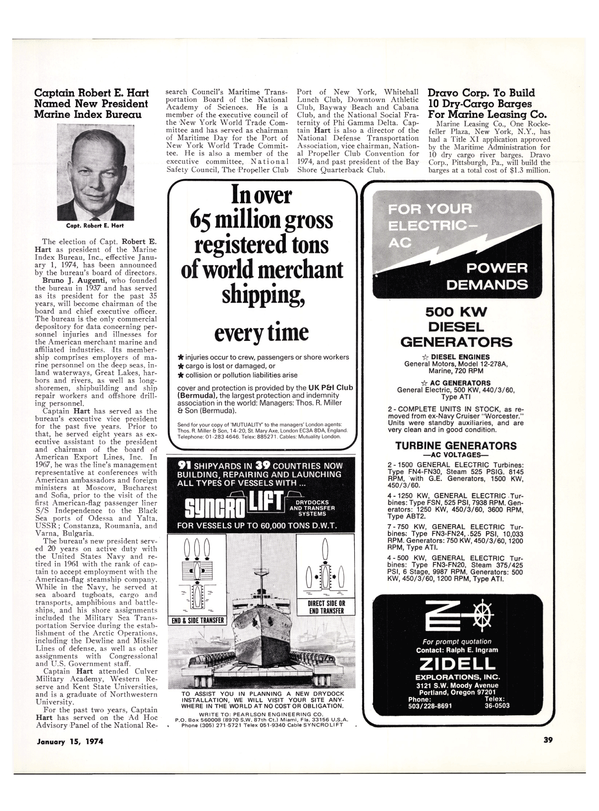