When the Presque Isle arrived at Gary, she offloaded her huge cargo at the rate of about 10,000 tons per hour. Each trip will deliver enough iron ore for the manufacture of about 10,000 automobiles.

The tug-barge is committed to a long-term transport contract with U.S. Steel Corporation.

She will sail between the steel company's facilities in Gary and Two Harbors, completing the round trip in less than six days.

The giant $35 million vessel was built by the Erie Marine division of Litton Industries, at Erie, Pa. Her 1000-foot length is seven times the height of Gary's Downtown Holiday Inn, or two-thirds the 1450-foot height of the world's tallest building, the new Sears unit in Chicago.

The barge measures 975 feet long by 105 feet wide, with 28J/2 foot draft. The pusher tug, built to Litton specifications by Halter Marine Services, Inc., New Orleans, is 152 feet long by 54 feet wide by 75 feet high. The pusher tug fits and locks into a specially designed notch at the stern of the barge, and the integrated vessel is 1000 feet long.

The tug's two 7500-hp Mirrlees Blackstone diesel engines, supplied by Hawker Siddeley, Ontario, Canada, propel the huge tug-barge at a speed of 15 mph (or 13 knots). The tug's 250-foot unloading boom was designed and built by the Hewitt-Robins division of Litton.

This $35 million vessel involved the talents of many firms during its design and construction.

Breit Engineering was retained to design the hull, outfit all necessary connection hardware for the tug and also the configuration and structural requirements of the barge notch.

Hewitt-Robins, a division of Litton Industries, was assigned the task of studying various subsystems and finalizing the design of the complete unloading system for the barge.

The bow section of the barge was contracted to Defoe Shipbuilding Company of Bay City, Mich. The 'bow was built to a length of 68 feet and out to the full beam of slightly less than the midbody molded beam of 104 feet 7 inches. The bow as completed by Defoe was essentially fully outfitted and finished, includ- ing the installation of all necessary machinery, switchgear, deck machinery and equipment.

The Barge As in the case of Erie Marine's Hull 101, the Stewart J. Cort, a longitudinally framed midbody was designed to suit the special manufacturing process and modular construction at the shipyard. The center space between the hold conveyor tunnels is utilized for both ballast tank and ballast pump space. The 40- degree hopper slopes were designed for the discharge of coal and therefore are ideal for unloading a taconite pellet cargo.

There are 27 cargo hatches, each 20 feet long by 70 feet 8 inches wide at the deck, arranged on 24-foot longitudinal centers, with a hatch omitted in way of the transverse cargohold bulkheads, to provide stowage space for the hatch covers. The 20-foot longitudinal opening allows two 12-foot spaced chutes to load simultaneously into the same cargo hatch.

The hatch covers, each 20 feet 6 inches long Iby 75 feet 3 inches wide and weighing approximately 35,000 pounds, are of the conventional Great Lakes type with Kestner clamps and are lifted and stowed by an Alliance diesel-hydraulic traveling bridge crane.

A minimum of auxiliary machinery is included on the barge with that prime source of electrical power being from unloading generators on the tug. A standby electric generating plant for the barge is installed. The set consists of a six-cylinder in-line Caterpillar D353TA Series E diesel engine powering a 300-kw, 2400-volt generator. It is the same as the ship-service generators installed on the tug.

A single, 1,500-hp, electrically driven, controllable- pitch bow thruster is installed on the barge. The thruster is of the conventional Bird-Johnson type, driven by a 1,500-hp, 2,400- volt, alternating current motor. The electric power for driving the thruster during maneuvering is provided from the engine-driven unloading generators on the tug. Control of the thruster is electrical from the pilot house or bridge wings on the tug.

Each side ballast tank has its own ballast system, which includes a 5,100-gpm horizontal centrifugal ballast pump manufactured by Allis-Chalmers and supplied by Pumps Inc.

Electrical power for the ballast system during loading, unloading or while ballasting at sea is from the tug.

The barge anchor windlass, supplied by Hyde Products, is of the vertical double-wildcat.

electro-hydraulic type. The port windlass is designed to lower, under control, the anchor and chain by means of a remote F.M. radio signal from the pilothouse of the tug.

The cargo unloading system that was selected was established after considerable study.

A transverse rotary elevator was found to fit the stern configuration and to satisfy the requirements of maximum cubic capacity. The selection of the hold subsystem was based on many years of satisfactory operation on the Great Lakes. It consists of an arrangement of two conveyor belts running the length of the barge and feeding the rotary elevator.

The 250-foot slewing, luffing boom was selected to provide maximum versatility. This type of off-loading provides the barge with the capability of unloading at all major ter* minals on the Great Lakes.

The transverse rotary elevator is a structural- steel, centerless wheel made up of two circular girders, 67 feet 6 inches in diameter.

The girders are 4 feet deep. The wheel is drivn by a flat reinforced rubber belt which also forms the outside enclosure of the wheel.

The mold board section of the inside portion of the wheel is formed by a flat reinforced rubber seal belt. These two belts together with the girder webs form a compartment which contains the cargo while it is being elevated.

The seal belt opens up at the top of the elevating cycle and allows the cargo to discharge by gravity onto a transfer conveyor. This conveyor transfers the cargo from the middle of the wheel to the tail end of the boom conveyor.

The operation of unloading the vessel requires four operators. One is located on the deck to supervise the boom positioning requirement, one to operate the material-handling system, and two gate operators.

The entire unloading system was designed and built by Hewitt-Robins.

The Tug The main hull of the tug is a rather complex steel structure that provides a restricted sized machinery space and incorporates the necessary tank spaces and connection structure.

The tug-barge hydraulic connection system, supplied by Victoria Machine Works, was designed to enable one operator to control, position, engage or disengage the tug into or out of the barge notch.

For normal connection the tug is propelled into the barge notch as far as possible. The operator on the tug will then extend and position the main hydraulic cylinder from the local control panel until the rod eve is engaged with the barge bracket. The main cylinder is then retracted until the tug is pulled into the final position within the barge notch. The emergency-release-lock bolt assemblies are placed in position through the slotted flanges on the cylinder and the rod eye and the hammer nuts tightened. The above results in a mechanical connection for maintaining holding power without depending upon hydraulic pressure. There is an emergency disconnect arrangement that may be used but it results in tearing apart hoses and electric cables connecting the two vessels.

Hyde Products furnished the single hydraulically driven vertical anchor windlass and the one capstan on the tug. The tug's windlass acts as the stream anchor windlass required for the tug/barge unit.

Two hydraulically operated, rotary-vanetype steering motors are provided, one for each rudder. Each steering motor is mechanically linked together with a tie rod so that the rudders operate in unison. With both hydraulic pumps in operation, the rudders are capable of being moved hard over to hard over in 19 seconds. The steering gear was supplied by Propulsion Systems, Inc./Frydenbo.

The main propulsion plant consists of two Mirrlees Blackstone K V i 6 main engines, each rated at 7,420 bhp maximum continuous service at 525 rpm. Each engine drives through a Holset flexible coupling into a Lufkin single input, single output horizontal offset reduction gearbox. Each gearbox is fitted with a Fawick pneumatic disconnect clutch and a power takeoff for driving the main unloading generators.

The vessel is twin screw with one engine and reduction gear for each shaft. The controllable- pitch propellers were manufactured by Bird-Johnson. While in port, the shafting is declutched and one main engine is used to drive a main unloading generator.

The main propulsion and auxiliary machinery have been fitted with a comprehensive automation control system, which has been designed to meet the requirements of the Coast Guard and the American Bureau of Shipping classifications, to permit unattended engineroom operation.

A fuel-oil treatment and preinjection plant is provided to enable the main engines to burn residual fuel having a viscosity of 3,500 seconds Redwood No.' 1 at 100° F.

A sewage treatment system consisting of a 25-man Pall thermally accelerated aerobic digestion sewage unit, arranged to automatically treat the wastes, has been installed. The treated effluent can be discharged overboard or into a 6,000 gallon retention tank.

The unloading generators, manufactured by the Electric Products Division of Portec, Inc., are rated at 3.000 kw. 1,200 rpm, 2,400 volt, three phase, 60 Hz. The three ship's service generators are driven by Caterpillar Model D353TA, Series E diesel engines. The generators were made by Columbia and are rated at 300 kw each.

The 14-man crew is quartered mostly in single staterooms with separate toilets and bath or shower.

The combined wheelhouse and chartroom has a conventional Great Lakes layout, and is carpeted throughout. Kearfott windows have been installed around all four sides to provide an unobstructed view. 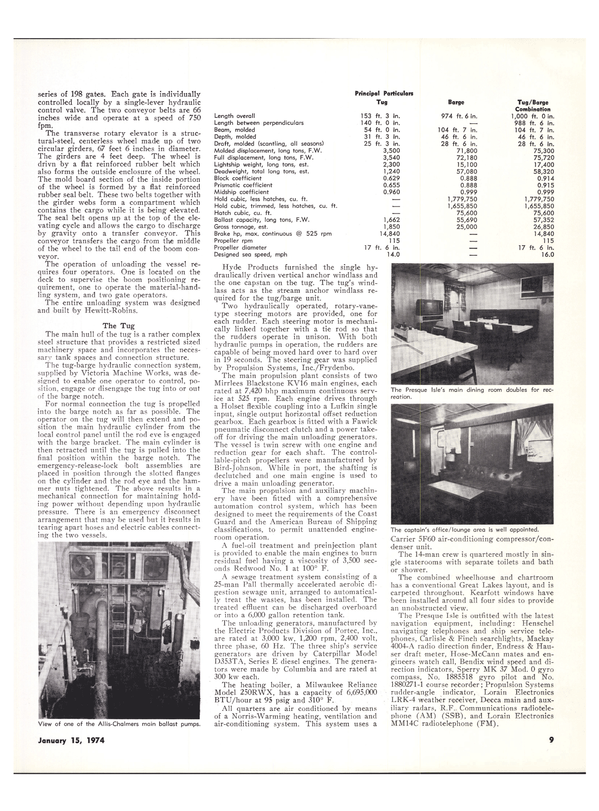