The tug-fireboats M.L. Walker and H. Burgess were christened recently at Thunderbolt Marine Industries, Thunderbolt, Ga. They are the first of a new generation of shiphandling and firefighting tugs specifically designed for work in the Panama Canal. The main feature of these tugboats is the capability of the propellers, located just forward of amidship, to be rotated 360 degrees, enabling the propeller thrust to be directed in any direction. The vessels can run astern with the same facility as in the forward direction.

The two vessels, which are sisterships, were designed by Norman N. DeJong & Associates, Inc.

of Jacksonville, Fla., and classed by the American Bureau of Shipping.

The M.L. Walker was named for Brig. Gen. Meriwether L.

The H. Burgess was named for Brig. Gen. Harry Burgess, who served as the fifth Governor of the Panama Canal from October 1928 to October 1932.

Parfitt is the wife of Governor Harold R. Parfitt of the Panama Canal Zone.

Mrs. Ruth Mary Jane Presley Huldtquist was sponsor for the H. Burgess. Mrs. Huldtquist is the wife of Fred Huldtquist of the Panama Canal Company.

Thunderbolt Marine Industries, a division of Latex Construction Company, was founded in 1972 by W.E. Honey, president and chairman of the board.

The company has rapidly expanded and enlarged its facilities to accommodate the needs of the owners of both commercial and pleasure vessels. The shipyard has both construction and outfitting facilities under cover. The outfitting area is serviced by a 400-ton Syncrolift with transfer facilities to storage, paint area and sandblasting.

The company has approximately 100 employees. Latex Construction Company is well along with plans for expanding the facilities of Thunderbolt Marine Industries, not only to increase volume, but also to handle larger vessels. 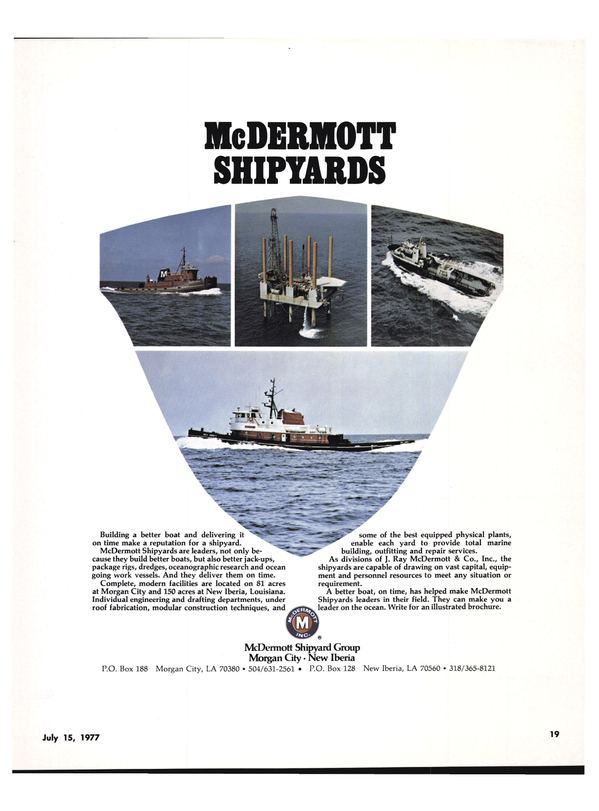