of Toronto, and is the third self unloader of this size delivered by the shipyard to Upper Lakes Shipping in the past three years.

The Canadian Enterprise is similar in all respects except one to the Canadian Transport, wh;ch was christened at the yard last April. The one difference is the design of the stern. Below the waterline are what appear to be the tops of two half tunnels which direct a greater volume of water against the propeller. Because of this feature, the ship's mediumspeed diesel engine will develop the same amount of thrust as an engine with greater horsepower, resulting in a saving in fuel of about 10 percent.

Canadian Enterprise is equipped with the latest type of cargo reclaimer and automated console that permits one crew member to unload the ship at a rate of 6,000 tons per hour. The console and reclaimer were developed by Port Weller Dry Docks, its subsidiary, Canal Electric Ltd., and a material-handling company. The console is located in the control room on the forecastle deck.

The ship is powered by two M.A.N, diesel engines generating 8,750 bhp. It will have a service speed of 13 knots, and will carry a crew of 30. 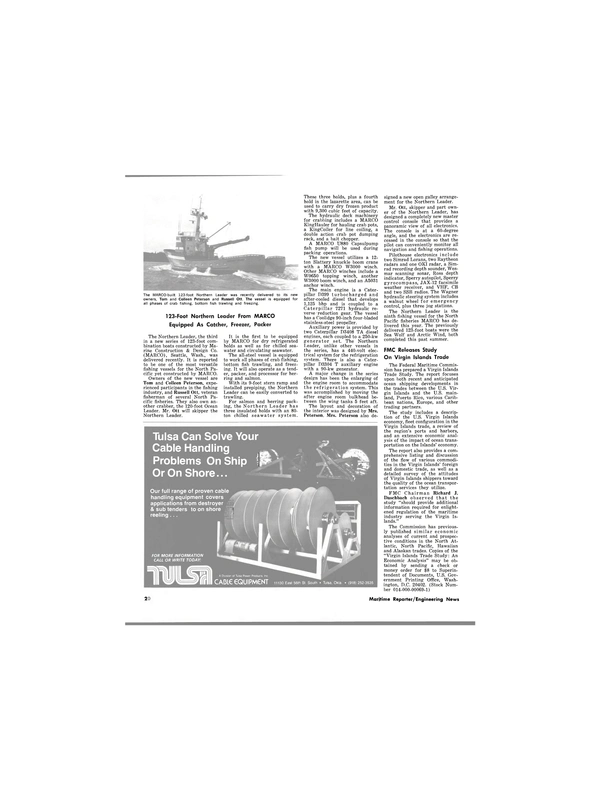