New Orleans, La., was selected as the site of the 1980 annual meeting of the Water Resources Congress to be held February 13- 16, at the New Orleans Hilton Hotel. This year's convention promises to be particularly significant and enjoyable for numerous reasons. It is being held during the week of the Mardi Gras festivities, giving many attendees the opportunity to participate in the Mardi Gras for the first time. More important, 60 years ago, in 1919, the Mississippi Valley Association, one of the two predecessor organizations of WRC, was founded in New Orleans. At this meeting, WRC will commemorate the founding of MVA and review the most important events which have transpired in the field of water resources over the past 60 years.

Attendees will ponder the future of water resource development in a setting which has become synonymous with controlled waters.

Meeting on the banks of the Mississippi River, WRC members and guests will assess where the nation stands concerning the conservation and development of its water resources as it heads into the 80s.

"Our association looks back over a decade of many accomplishments in the wise use and proper development of the nation's water resources," reported Vernon Behrhorst, chairman of the board of WRC. "However," he continued, "WRC is concerned over the future of water resource programs because of the many regulations promulgated during the 70s which will dog the footsteps of project planning and development in the coming decade." In addition to the morning and afternoon sessions, the agenda features nationally prominent luncheon speakers, an evening reception, an attractive program for the ladies, and the WRC Marine Exposition, opening at 9 a.m., February 14, in the Grand Salon 1 and 2. Other attractions include the Mardi Gras parades, February 12 through 16; an evening with jazz clarinetist Pete Fountain, February 15; and a New Orleans harbor cruise aboard the steamer Natchez, February 16.

Seven general sessions on the multiple uses of water will be held in the Grand Ballroom A. These include: Water for Food & Fiber; Flood Plain & Coastal Resources; Water for Energy and Industry; Water for Fish, Wildlife and Recreation; Water for Transportation and Commerce; Water Quality and Municipal Supply; and Water Resources Management.

Among the events of particular interest to vessel operators and builders will be the WRC Marine Exposition and the session meeting, "Water for Transportation and Commerce," which will be held Friday, February 15, from 1:45 to 3:30 p.m. in Grand Ballroom A. The topic of this session will be "General Subjects of Regulations Pending Legislation and Studies." Charles F. Lehman and Rear Adm. Wayne E. Caldwell, Chief Office of Marine Environment and Systems, U.S. Coast Guard, will preside over the meeting. Participants will include Maj. Gen. E.R. (Vald) Heiberg III, Director of Civil Works, U.S. Army Corps of Engineers.

Other meetings include the board of directors, business, general membership, and the Resolutions Coordinating Committee.

The WRC Annual Meeting adjourns at noon on February 16. 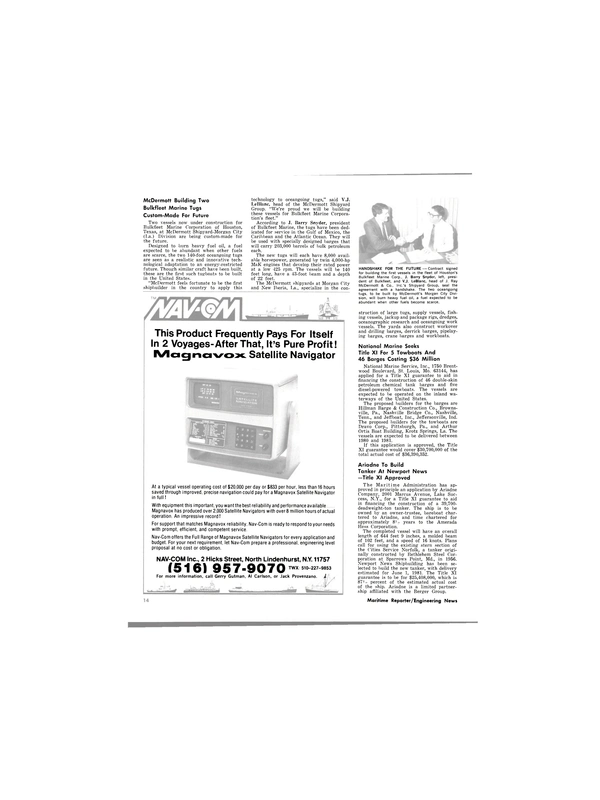