(HUDSHIP) of Pascagoula, Miss., recently delivered the utility ves- Lamnalco Merlin (shown above) to Lamnalco Ltd. of Kuwait. The new boat will join the fleet operated by Lamnalco, who operate their own vessels and manage vessels of other companies throughout the Arabian Gulf and Red Sea.

The utility vessel T.E. Short, the initial boat of the 112-foot class built by HUDSHIP for Hudson Marine, was purchased recently by Lamnalco and renamed Lamnalco Falcon. That vessel is now operating out of Jeddah and the Red Sea ports of Saudi Arabia The design of Merlin is HUDSHIP's standard 112-foot utility vessel hull, with some minor modifications to suit the owner's particular requirements. The lower house arrangement has been redesigned to accommodate 18 men in five cabins. The upper house has three single cabins for the captain, chief engineer, and a company official. The after deck, unchanged by the redesign, has a National 12V2-ton crane mounted at the starboard stern corner to service the entire cargo deck.

Lamnalco Merlin is powered by twin GM Detroit Diesel 16V92NA engines, each rated 600 bhp at 1,800 rpm, with Twin Disc MG527 reduction gears. The power package was supplied by George Engine of Harvey, La. Engine controls are by Kobelt. On sea trials the vessel exceeded 10 knots in a loaded condition and logged 13 knots lightly loaded. Engines are monitored by a Marine Electrical Design system. 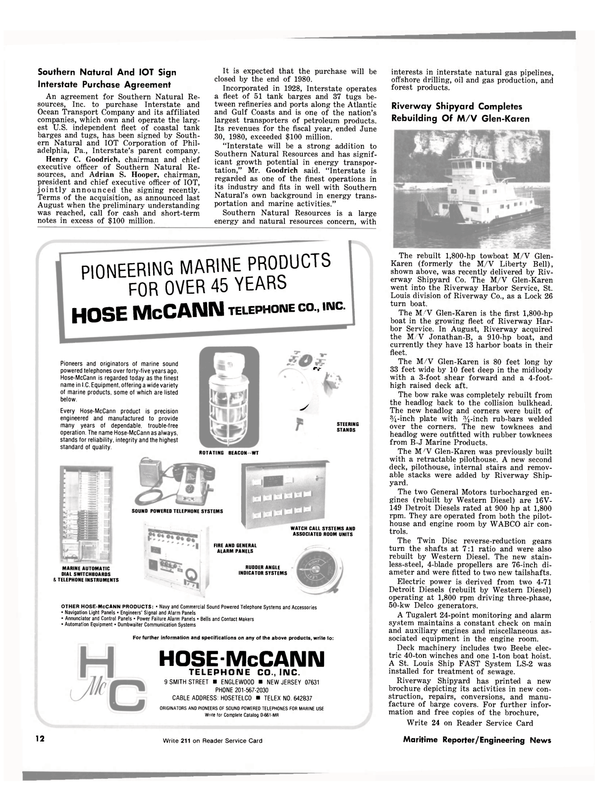