The Belcher-Port Everglades, the largest oceangoing tugboat ever built in this country, was constructed for Belcher Oil Company of Miami by Diamond Manufacturing Company, Savannah, Ga. Belcher Barge #102, built by Galveston Shipbuilding Company of Texas, is also the largest vessel of its type built in the United States.

On hand to officially welcome the tug and barge unit to the port were Florida's Lieutenant Governor Wayne Mixson, Oscar Wyatt Jr., chairman of the board and chief executive officer of The Coastal C o r p o r a t i o n , and Ken Johnson, president of Belcher Oil Company, a subsidiary of The Coastal Corporation.

The Belcher-Port E v e r g l a d es (and her recently launched sister, the Belcher-Tampa) measures 167 feet in length, is 53 feet across the beam and has a 25-foot draft.

The 38-foot tall engine has seven cylinders that p r o d u c e 15,200 horsepower while turning only 123 revolutions per minute.

"The Belcher-Port Everglades is significant in the American maritime industry," says K.O.

Johnson, Belcher president. "She i n t r o d u c e s the latest advancements in slow-speed diesel engine technology to American coastal trading." The Belcher-Port Everglades, in mating with Belcher Barge #102, fits tightly into a 115-foot custom-designed notch at the rear of the barge.

The barge is double-skinned with double bottom tanks throughout and has d e d i c a t e d ballast.

Built to ABS rules, the barge is the largest unmanned barge of its type in the world. Capable of carrying five different products in 10 separate tanks, she has a capacity of 417,000 barrels of oil.

Each of the five deepwell pumps is equipped with its own diesel engine drive and is capable of discharging 6,250 bhp. Two ballast pumps, located aft, port and starboard, handle ballast water at 4,000 bhp. The 55,000-ton vessel is 640 feet long, 59 feet tall, and when fully loaded has a draft of 39 feet.

"The barge was designed to increase the delivery capability for petroleum products with considerably increased efficiency," Mr. 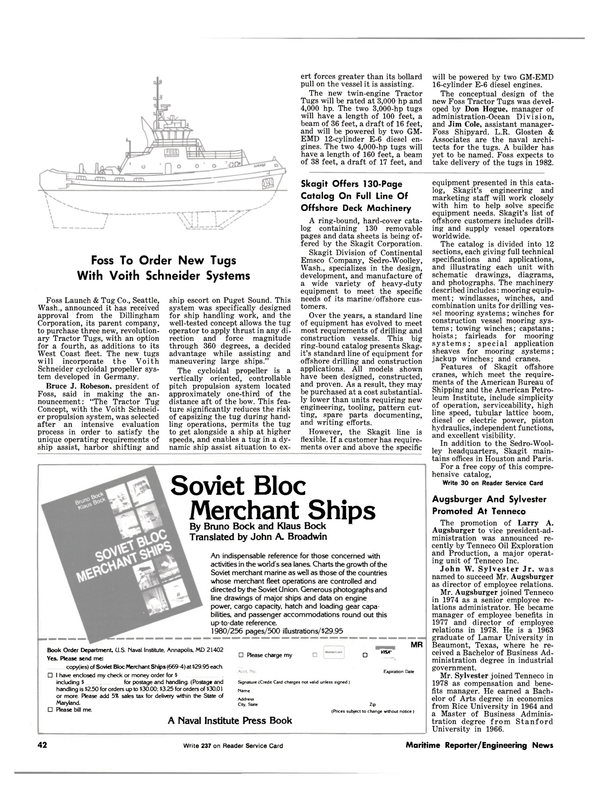