Calling it the largest port development in the state's peacetime history, Maine Governor Joseph Brennan has announced the State of Maine and the City of Portland have signed a memorandum of intent with Bath Iron Works for a $46.7-million expansion at the Port of Portland.

Bath Iron Works, which has been building both Navy and commercial ships on the banks of the Kennebec River for 97 years, said it would construct a shipbuilding repair and overhaul facility at the Maine State Pier in Portland.

BIW, which has gained an international reputation for building ships ahead of schedule and under budget, will utilize the facility to overhaul Navy and commercial vessels, as well as to complete the outfitting of new vessels constructed and launched 40 miles up the Maine coast in Bath. The drydock at the Portland facility will have a lift capacity of at least 24,000 tons, three times the capacity of its drydock in Bath. The plan states that Bath Iron Works will provide $16.7 million, of which $10 million will be used for capital investments and $6.7 million to finance the shipyard's working capital requirements in the first five years ; that the State of Maine will finance $15 million through General Obligation Bonds; and that the City of Portland will finance $15 million through General Obligation Bonds. While there is a fixed limit on the obligations of Portland and the State of Maine, Bath Iron Works has agreed to assume responsibility for any cost overruns which may materialize.

"Bath Iron Works believes that the memorandum of intent which we have signed with the State of Maine and the City of Portland for a major expansion of BIW at the Port of Portland marks the beginning of a new and exciting chapter in Maine's rich shipbuilding history," said John F. Sullivan Jr., BIW's CEO and chairman.

"I want to say at the outset that this project in no way represents a move by BIW away from Bath.

. . . We view this expansion to the Port of Portland as a unique opportunity to provide for the necessary growth and development of BIW which, in turn, will benefit the state's economy." Over the past five years, Bath Iron Works Corporation, a Congoleum Company, has experienced consistent expansion of its work load and employment in Bath.

During this period, the shipyard's work force has grown to over 6,500, which is an all-time record post World War II high; its backlog has increased to $900 million and utilization of the shipyard's facilities has approached full capacity. Most recently, with seven or eight ships in the water at any one time and building ways fully utilized, BIW has been forced to turn aside potential new work which otherwise would have been extremely attractive.

Navy are consistently being delivered 17 weeks ahead of their original contract delivery dates.

On its first 11 FFGs, BIW is underrunning the Navy's target costs in excess of $5 million per ship and forecasting underruns on subsequent ships in the program. 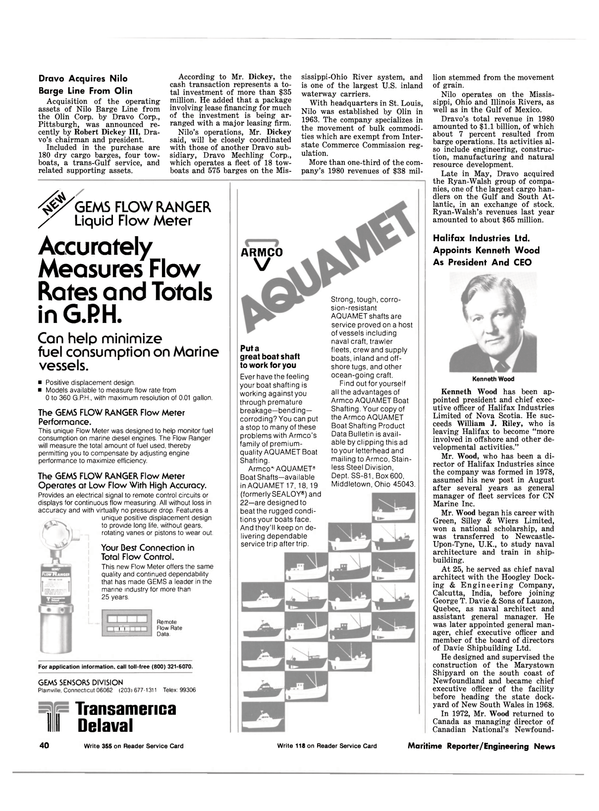