The 92nd Annual Meeting of The Society of Naval Architects and Marine Engineers that took place at the New York Hilton Hotel November 7-10 drew a larger than usual turnout for the technical sessions, the Annual Banquet, and for the againexpanded Third International Maritime Exposition. At the show, 186 exhibitors, an increase from 139 last year, some from as far away as Japan and Korea, occupied about 26,000 square feet of space—virtually the entire second floor of the Hilton.

Since its addition to the SNAME annual only two years ago, this third exposition has firmly established itself as the premier marine industry trade show. Its continuing growth promises greater success in the years to come.

Presiding at the President's Luncheon on November 8 and the Annual Banquet on November 9 was SNAME president C. Larry French, chairman and CEO of National Steel and Shipbuilding Company in San Diego. He served a twoyear term as president until the end of 1984.

A 1947 graduate of the Naval Academy at Annapolis, Mr. Nelson spent five years at sea before attending Webb Institute of Naval Architecture, where he earned a master's degree in naval architecture and marine engineering in 1955. Subsequently, he rose through the Navy ranks to become commanding officer of the David W.

In 1975 he retired after 28 years of Naval service and joined the Rosenblatt firm as vice president of operations.

He was elected president of the firm in April 1984.

Mr. Nelson has been a member of the Society since 1955, and was elected an honorary vice president in 1983. He has been serving as chairman of the Editorial Committee of the SNAME journal Marine Technology.

Medals & Awards At the banquet in the Hilton's Grand Ballroom on November 9, the Society's three medals were presented.

The David W. Taylor Medal "for notable achievement in naval architecture and marine engineering" that is given annually went to one of the world's foremost hydrodynamicists, Dr. Jan D. Van Manen, president of the Netherlands Ship Model Basin. He holds a doctorate from Delft Technological University and is Extraordinary Professor there. His career spans more than 35 years, dealing with ship propulsion and propeller design, making the Netherlands Basin at Wageningen one of the world's best known.

The maritime community needs no introduction to Lester Rosenblatt, recipient of the annual Vice Admiral "Jerry" Land Medal, given "for outstanding accomplishment in the marine field." In 1947, with his late father Mandell Rosenblatt, he formed the firm M. Rosenblatt & Son, Inc. A University of Michigan graduate, he is a past president of SNAME.

At the President's Luncheon the following awards were presented by Mr. French: The Captain Joseph H. Linnard Prize for 1984 was awarded to Richard J. Baumler, Toshio Watanabe, and Hiroshi Huzimura for their paper, "Sea-Land's D-9 Containerships: Design, Construction, and Performance," for the best paper presented at the previous Annual Meeting and printed in Transactions.

The Vice Admiral E.L. Cochrane Award for the best Section paper of the year went to Archibald C.

Churcher, Alexander Kolomojcev, and Geoff Hubbard for their paper, "Design of the Icebreaking Supply Ship Robert Lemeur," delivered at the Pacific Northwest Section.

The Graduate Paper Honor Prize for 1984 was awarded to Thomas J.

Ternes for his paper, "Flow Under Prismatic Structures in Extremely Shallow Water," presented at the Northern California Section.

A Certificate of Appreciation was presented to William C. Freeman "for outstanding leadership and services to the Society" as chairman of the Budget and Endowments Committee from 1977 to 1983, and to Carlton E. Tripp as chairman of Panel HS-1-2 (Wave Loads—Great Lakes Vessels) from 1964 to 1983.

The President's Address In his last speech as SNAME president, Mr. French said that some form of legislation such as the Boggs Bill that would reserve a percentage of U.S. imports and exports of carriage by American-flag ships, U.S.-built and manned, is crucial to the survival of the American commercial shipbuilding industry. He also criticized the Reagan Administration for "channeling merchant ship construction to shipbuilders abroad and in manipulating the progressive destruction of domestic shipbuilding resources." The following paragraphs are ex- cerpts from his final president's address.

"All Presidents of the United States, including Ronald Reagan, have discovered that being in office is different from seeking office.

Nice-sounding, crowd-pleasing, and often misleading campaign promises are not easily or quickly translated into action programs. This has certainly been the case with respect to the noble pledges made in 1980 pertaining to maintaining an adequate shipbuilding industrial mobilization base.

"A naval ship construction program has been well advertised as evidence that those promises have been fulfilled, but in truth the shipbuilding base is rapidly disappearing.

Skilled workers are being laid off and shipyard employment is steadily decreasing. For lack of the promised support from this Administration, the U.S. commercial shipbuilding industry and its allied industries are slowly strangling.

"Foreign governments insure our non-competitiveness by protecting their domestic markets and subsidizing their shipbuilders and ship operators. The results of these conditions are that without some form of government protection or subsidy, no ships would be built in the United States and no domestic shipping would exist.

"Prior administrations have recognized this fact, and cabotage laws and subsidy programs have existed since the days of the clipper ships to insure that a shipbuilding industry and merchant marine exist in the United States. The Merchant Marine Acts of 1936 and 1970 were passed to insure that an adequate merchant marine and shipbuilding capacity could be maintained. This Administration, driven by free traders, has exported commercial shipbuilding and much of our allied industries, and pushed many of our ship operators into bankruptcy.

"Through the initiative of the Administration in channeling merchant ship construction to shipbuilders abroad, and in manipulating the progressive destruction of domestic commercial shipbuilding resources, we could be moving toward a critical position of overreliance on foreign sources for future needs. We are already dangerously dependent upon foreign sources for strategic materials that are critical to our survival. And we are already over-reliant on the shipping services of other countries to transport exports and imports that are vital to our national security, economic growth, and trade stability.

A higher degree of sovereign control is clearly imperative; the alternative is national peril.

"In my thesis last year I concluded the only policy that would solve the problems of inadequate U.S.-flag merchant marine, U.S.

domestic shipbuilding capacity, and smokestack industries was some form of cargo preference. I proposed a Boggs type bill that would require a specified percentage of U.S. bulk imports and exports be carried in U.S.-built, U.S.-operated ships. The increased costs of implementing this policy would be paid for by the taxpayers of the United States, as are all other national defense costs. I am happy to say that a bill to accomplish this idea has been introduced in Congress. That bill is HR6222, jointly sponsored by Congresswoman Lindy Boggs from Louisiana and Congressman Herbert Bateman from Virginia. I endorse this bill and sincerely suggest you urge your Congressional representatives to pass it.

"To further support my thesis I would like to comment on a recent Congressional Budget Office study.

This study, prepared at the request of the Senate Armed Services Committee, concludes: 'without government assistance or other reforms, ships operating under U.S. flag and shipyards here, long considered important to the economic and security interests of the United States, may shrink because of slack market conditions and lower cost foreign competition and will ultimately impair the ability of the United States to mobilize, deploy, and support its forces in war.' The study recommends a program that would support construction of 20 merchant type vessels annually in addition to naval building as sufficiently large to maintain the existing fleet at about its present size and provide something close to a base for wartime mobilization. This conclusion closely agrees with my thesis.

"The study then examines three alternative programs that could be implemented to accomplish this 20 ships per year building program.

The first is to re-establish a subsidy program similar to the ones under previous administrations based on the Maritime Acts of 1936 and 1970.

The second proposal is to implement a program similar to the Bateman- Boggs Bill. The third is to have the government directly acquire 20 ships per year for use by Military Sealift Command and assignment to ready reserve status or leasing to private operators.

To further support my thesis I would like to examine these alternatives.

The first alternative, construction and operating subsidies, is doomed to failure. The Nixon Merchant Merchant Marine Act of 1970 did not succeed because no owner will buy a ship, subsidized or not, if there is no cargo. Construction and operating subsidies are not enough to enable U.S. operators to compete with foreign government-supported merchant marines. The third alternative is also a loser. Ships designed for military service will not find any operators willing to lease them for commercial service. Ships built under this program will all end up being operated by the Military Sealift Command or being placed in the ready reserve. Ships operated by MSC, in addition to those already in use, will compete with the existing private operators and force more private ships out of the U.S. Merchant Marine. Ships put in the ready reserve will not provide jobs for merchant seamen, and in time of need no qualified crews will be available. Besides, after the first 20 brand new ships are tied up in some bay, how long would it take for Congress to cut off funds to build any additional ships for the reserve fleet?

"I conclude that the only logical solution to the problem is the second option—a cargo reservation program similar to the Bateman- Boggs Bill. I hope you and others will agree with me and work to get such a program started.

"With this type of program as a basis, a comprehensive Maritime Policy should be developed. It is the only possibility of avoiding a potential national calamity. A Maritime Policy based on cargo reservation and possibly implemented with affirmative bilateralism will strengthen our security and defense, and simultaneously improve our trading leverage. U.S.-flag shipping and U.S. shipbuilding—the entire American Merchant Marine and the country—would in turn benefit." 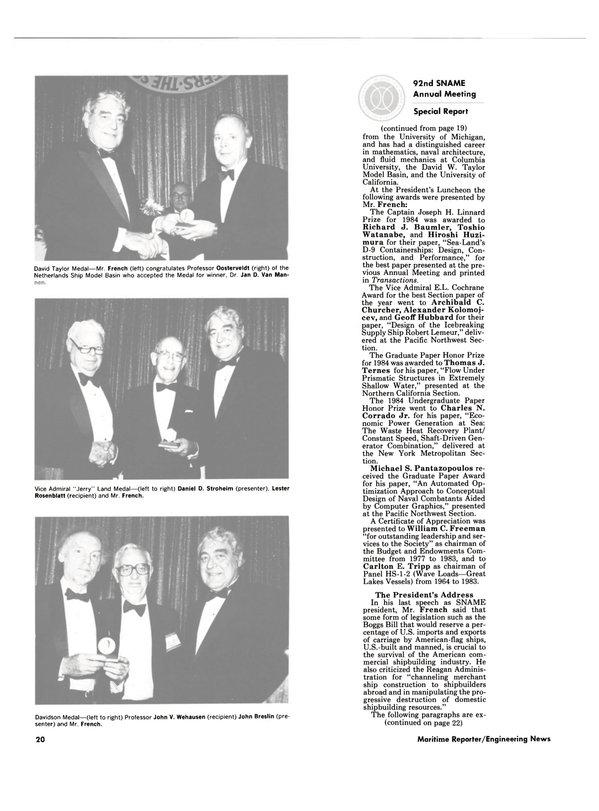