In the near future, an optimally graded MAN B&W four-stroke engine program of state-of-the-art design will be available in the output range between 3,300 kw and 12,000 kw, equipped to meet the propulsion requirements of the 90s. The new family is comprised of three MAN B&W medium-speed engines, all modeled on the same design principles.

Beginning with the largest engine, the L58/64, MAN B&W has created an engine series for a class of toprated engines designed with a view of achieving economy and reliability and equipped with every manner of future-orientated, technical and economical design characteristics.

The "little brother," L40/54, which successfully completed its test bench trials at the end of 1987, with its cylinder output of 665 kw is modeled on the basic design concept of the L58/64 engine, an engine that has since proved itself in operation in numerous ships' propulsion plants. The first seven L40/54 engines will be supplied in early 1989.

The L48/60 engine currently under development plugs the output gap between the 40/54 and the 58/64 with its 885-kw per cylinder at a speed of 450 rpm. This engine was also modeled on the same futureorientated design concept.

All three engines are supplied as in-line configuration engines with between six and nine cylinders.

MAN B&W's exhaust gas turbocharger with a very high level of aggregate efficiency over the entire load range permits a part of the exhaust gas flow to be branched off and utilized in a turbo-compound system, thus raising the aggregate efficiency of the propulsion plant; resilient mounting of the engines— the rigid design makes it possible to arrange the resilient bearing elements directly on the engine lands.

Low maintenance requirement thanks to an optimized maintenance concept: with only three different hydraulic tools, all the main screw connections can be slackened and re-tightened; rocker arm covers can be opened without great physical exertion and fix themselves in the open position; and the design and arrangement of the rocker arms makes for swift and simple removal of the exhaust valves. 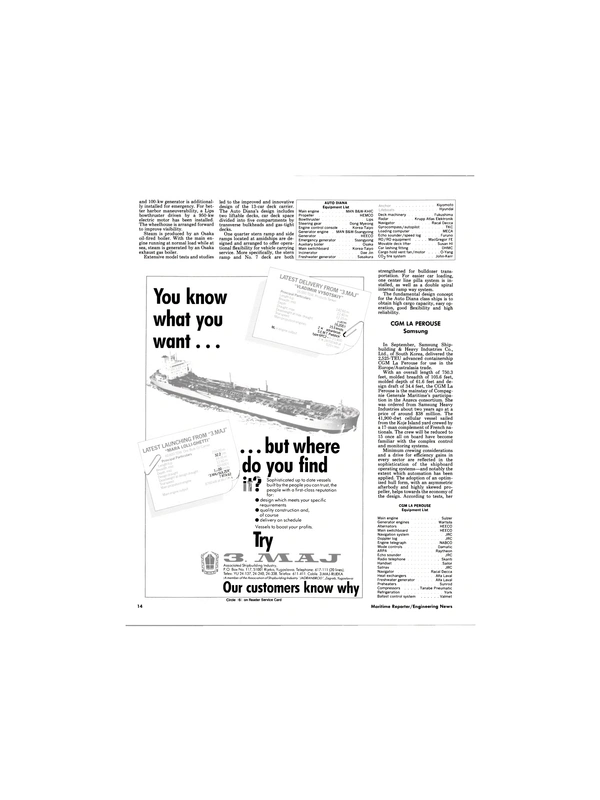