The Marine Machinery Association recently held its fall Government/ Industry forum in Crystal City with strong participation from industry as well as from the Navy's engineering and purchasing communities.

MMA's president, Jim Fromfield of Leslie Controls, reported on the expansion and improvement in the lines of communication between the Navy and its machinery and equipment manufacturers, and he described some of the positive changes that are even now taking place. Mr. Fromfield told of recent meetings between MMA and senior officials of the Navy where new joint efforts were planned. Some of the subjects that are part of the ongoing discussions, he said, included research and development projects for hull, mechanical, and electrical manufacturers, and proprietary data rights issues facing the Navy as well as the industry.

MMA's past president, Jack J a n e t a t o s of Baker & McKenzie, observed that a new set of interim data rights regulations were expected to be released shortly, making some changes which recognize the rights of manufacturers as viewed by Congress. He said that at the recent meetings with Navy officials initiated by Mr. Fromfield, he noted an increasing awareness of the data rights problems faced by the industry. He went on to discuss the new law requiring increased quality standards for spare parts that Congress had just passed with strong MMA support. The new requirement, which was part of the 1989 Defense Authorization Act, requires the Defense Department, when buying spare parts critical to the operation of a ship or aircraft, to specify, wherever possible, the same quality standards on spare parts as were called out on the originals.

Passing this law shows that Congress is truly committed to quality for our ships. He noted in closing that while the political support of the shipbuilders is concentrated in the coastal states, the machinery and equipment suppliers, MMA's members, exert political strength throughout the country.

He explained how the concept was introduced into his company and how the benefits of it have been achieved. Willis Willoughby, the Navy's Chief of Quality Assurance, urged both industry and the Navy to concentrate efforts and investment on quality and productivity improvement.

Navy Capt. Wayne Humphreys, the Chief of Staff of the Commission on Merchant Marine and Defense, discussed the effect of the ending of merchant ship construction in the United States, noting that it reduces our ability to support our national security interests.

Captain Humphreys said the growing magnitude of that problem is only beginning to be dealt with by the Department of Defense and even that effort has wholly inadequate funding. In thanking MMA for the help it has given the Commission, he urged that this support continue as the Commission issues its third report shortly and its fourth report in January.

In an extremely well received luncheon address, Rear Adm. Roger B. Home, Deputy Commander of the Naval Sea Systems Command for Design and Engineering, issued a call for greater industry and Navy efforts at improving quality. He noted that the time for crew response to a combat threat is now measured in seconds—no longer in hours. Equipment, he said, must perform properly, to its design standards, and with instant response.

Admiral Home stated that the Navy depends on its manufacturers to deliver quality and design innovation and urged joint efforts at improving specifications and shipbuilding standards.

William A. Tarbell, NAVSEA's Chief of Acquisition Planning, pointing to Undersecretary of Defense Costello's July report, "Bolstering Defense Industrial Competitiveness," recognized the problem to the national defense resulting from the decline in the shipbuilding industrial base. He expressed the view that DoD efforts alone could not bring about all the improvement needed. He acknowledged that Seawolf (SSN-21) is the only new ship program on the books now, and this alone will not be enough to have any large impact on preserving the industrial base.

Senator William Cohen of Maine, in a dynamic presentation, demonstrated a keen awareness of industry difficulties and a determination to do something to help. Senator Cohen most clearly expressed the Congressional support that exists for the Navy. He said that he remains confident that with the rising nationalism in the country, the Navy will continue to get the funds it needs. "This year," Senator Cohen said, "they got more than they asked for." Senator Cohen, in pointing out some of the problems flowing from the decline of merchant shipbuilding, noted that the public does not yet understand the importance of the merchant marine to the defense of the nation.

MMA plans presentations by executives from each of the major shipbuilders, the manufacturers, and Navy representatives. Those manufacturers of naval shipboard machinery and equipment who wish to join MMA and anyone wishing to attend the February meeting should contact: Marine Machinery Association, 1700 K Street, N.W., Suite 903, Washington, D.C. 20006; or telephone: (202) 293-7169. 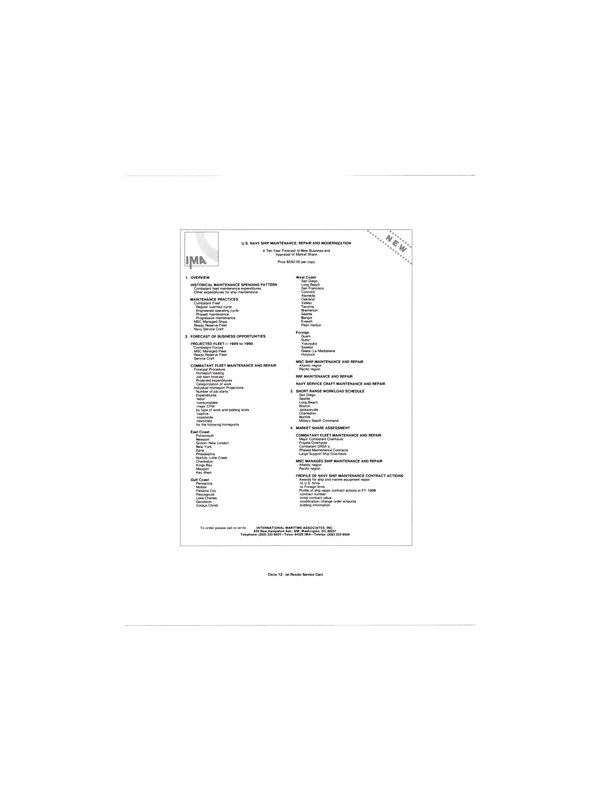