The Trinity Marine Group, reportedly the largest builder of small ships in the U.S., has entered the megayacht field with the establishment of Trinity Yachts, Inc. and the start of construction of the 97-foot, all-aluminum motor yacht Leda, designed by MPS-Gilgenast. It will be the first American-built yacht by the German designer.

In making the announcement, John Dane I I I , president of the shipbuilding group, said: "Megayachts are a natural progression for us because we have the experience, resources, quality workmanship, and production capacity to lead this segment of marine construction, just as we lead other aspects of the industry. There is a strong demand for U.S. yachts built to international regulatory standards with the quality of Northern European shipyards. We are proud to have been selected to build Gilgenast's first American yacht." Mr. Dane said while some are just beginning to try to build to American Bureau of Shipping (ABS) and U.S. Coast Guard standards, nearly all of the larger vessels built by Trinity meet or exceed those and other regulatory standards including Lloyd's and Det norske Veritas.

He said Trinity shipyards were pioneers in the design and construction of high-speed aluminum crew boats, military patrol boats, surface effect ships, and innovative propulsion systems including turbine/ water jets. He added that Trinity is also building ocean surveillance ships for the U.S. Navy whose diesel- electric and other systems rank these ships among the quietest in the Navy.

The new trans-Atlantic yacht, which will be owned by an East Coast yachtsman, will feature elegant styling and an easily driven hull form with a semi-displacement shape for seakeeping ability. She will have an overall length of 97 feet, molded beam of 23 feet and draft of 4 feet 7 inches.

Cruising speed at half load is expected to be 22.5 knots and the yacht will be built to American Bureau of Shipping standards and certified ABS, Maltese Cross A-l. AMS Circle E yacht service.

Propellers and shafts will be located in tunnels which enabled MPS-Gilgenast to reduce the propeller shaft angle as well as the boat's draft. This propeller shaft arrangement also enables the engine room to be placed aft of the accommodations for better accessibility and reduction of noise and vibration while still using a straight drive arrangement.

For free literature giving complete information on the facilities and capabilities of Trinity Marine Group, Circle 27 on Reader Service Card 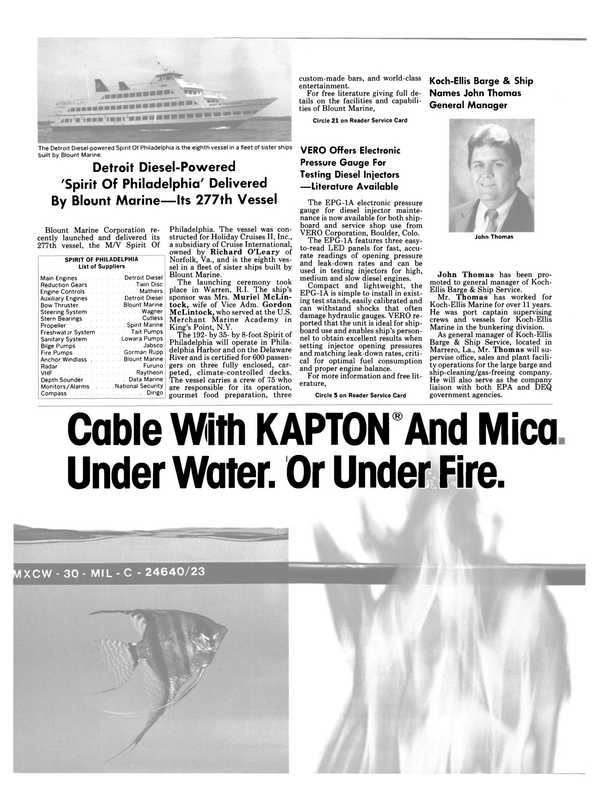