The Quebec-based Industrial Systems Division of Siemens Electric Ltd. has supplied an integrated electric propulsion system (see Figure 1) for the newest British Columbia car ferry. Already in service, the 85- vehicle, 300-passenger MTV Queen of Capilano is the first of two such ferries for operation between Earl's Cove and Saltery Bay in British Columbia.

The electrical power at 4.16 kv is generated by three brushless 1,700- kw generators driven by Bergen Diesels.

Each of the ship's four Z-drive propellers are driven by Siemens 900-kw propulsion motors. Siemens has provided ship's service transformers which supply the ship at 480 v.

This switchboard includes 6 Siemens' SIMATIC PLCs to control diesels and generators, 15 microcomputer- based control and protection devices and various instrumentation.

All these controls are implemented in the power management system which provides control of the propulsion system.

The main machinery is checked by an alarm and monitoring system, SIMOS 32C, collecting the signals from 450 different sensors.

The output of the system is connected to the two VDUs for alarms, one VDU for graphics and two printers, one for alarms and the other for data logging.

Siemens supplied a PC-based Health Monitoring System used as the main tool for an optimal maintenance of the ship's main machinery.

At the same time, the fuel monitoring system permits the ship's crew to optimize the fuel oil consumption.

The second ferry of the series is being commissioned by Siemens engineers at Vancouver Shipyards.

In addition, a Jumbo Class 470 car ferry under construction for B.C.

Ferries will be fitted with a complete Siemens electrical and automated control system. 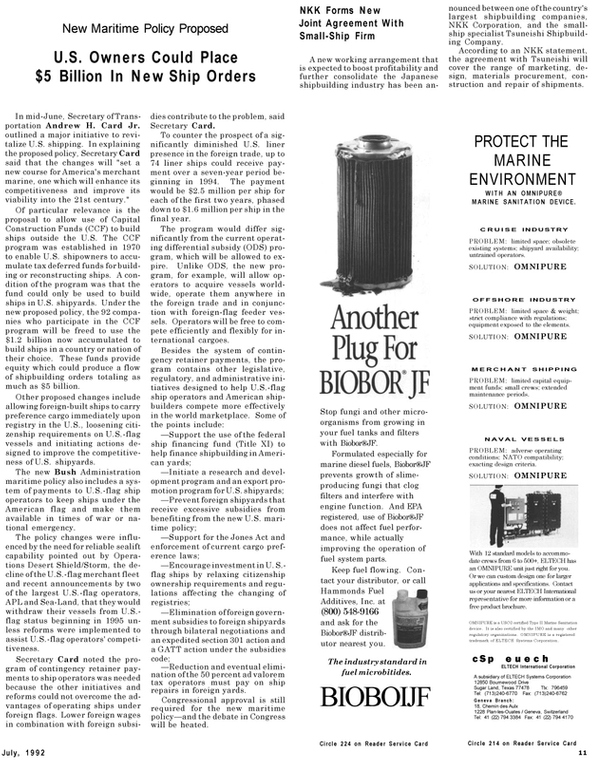