The International Council of Cruise Lines (ICCL) attended the meeting of the National Transportation Safety Board (NTSB) on July 11 where the Board discussed a safety recommendation issued to the cruise industry in 1997. The Board thoroughly criticized the industry for not imminently installing the recommended action, which states that "automatic smoke alarms that sound locally in crew and passenger accommodation areas should be implemented on foreign flag cruise ships." The NTSB states that as a result of this device, both crews and passengers will receive immediate warning of the presence of smoke and will therefore have the maximum escape time during a fire.

While the safety of passengers and crew is paramount to ICCL, the Council does not disagree with the intent of the NTSB's recommendation.

However, ICCL believes that this recommendation, as written, could result in adverse operational and technical consequences that could conflict with safety systems and procedures onboard a passenger vessel.

ICCL is also in the process of reviewing the federal court ruling requiring that all passenger vessels must comply with the Americans with Disabilities Act (ADA) standards onboard ships.

There are currently no ADA regulations specific to the passenger vessel industry for accessibility.

However, ICCL-member cruise vessel operations have gone to great lengths throughout the past 10 years to build vessels that are fully accessible to passengers with disabilities. 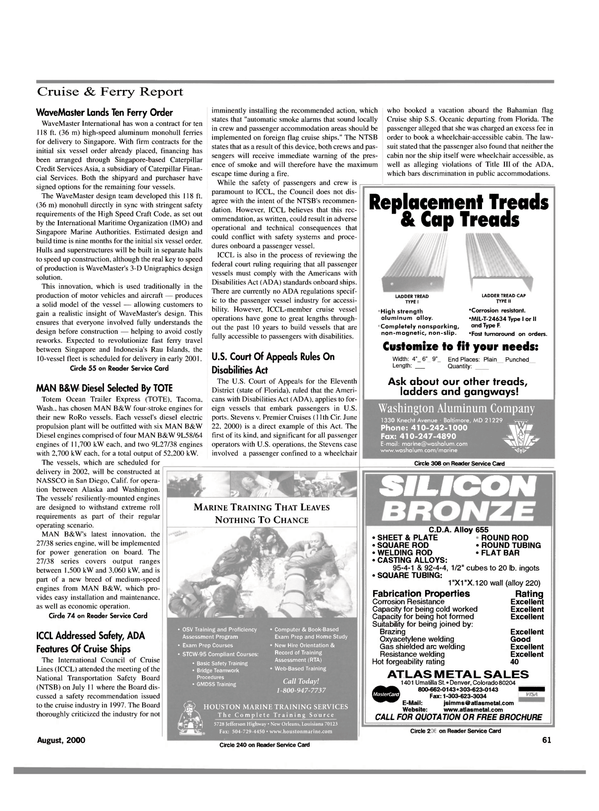