Shipyards around the world are facing increasingly stringent environmental rules and regulations, adding additional expense to a business sector with an already reputed thin bottom line.

Nonetheless, to stay in business shipyards must continuously enhance their capabilities and compliance, in order to successfully woo and complete lucrative jobs. U.S. shipyards have aggressively been augmenting traditional repair expertise with the tools and systems needed to prosper in 2000 and far beyond. The ensuing editorial updates significant activities and enhancements at U.S. ship repair yards.

Detyens Shipyards based in North Charleston, S.C., is continuing its upbeat course of developing trusted relationships with customers along the U.S. East Coast — specifically with Hvide Marine, Inc. The yard completed two jobs for Hvide this past year — ITB Seabulk Magnachem and tanker M/V Seabulk America. The latter visited Detyens' drydock for routine work and had its KORT nozzle, which had been installed several years earlier, removed from its hull and discarded. A new owner-supplied propeller was machined and fitted to the existing.

Detyens has also worked with Tyco Submarine Systems with the drydocking of various cable layers.

Global Mariner has been at the yard's drydock on several occasions, as well as other Tyco-owned ships, mainly Global Link, Charlie Brown and Long Lines.

Most of the work completed for Tyco encompassed cleaning and painting of hulls, repairs to bowthrusters, and in the case of Global Mariner, the rebuilding of its port and starboard propulsion thrusters this past March.

Seaboard Ship Management has also worked diligently with Detyens by bringing in six of their vessels to the yard throughout the past 16 months. Each vessel was outfitted with controllable pitch propellers and almost all required major repairs, including disassembly and overhaul of the hubs and blades. In general, ramp repairs take place as well, stressing on the renewal of wasted steel members, blasting and painting.

More notable was the yard's closing of the largest commercial reactivation and conversion in the U.S. with work on LNG Carrier Galleoma. Formerly known as Arzew, the vessel, which is on charter from Argent Marine Services to Shell Bermuda Overseas, Ltd., received a new compressed air system, and conversion of its storeroom into an auxiliary machinery room, as well as new steering gear. The vessel also had its mooring arrangement and life boats modified, along with an upgrade of its integrated bridge and work on its cargo tank, fire and main sprinkler system and electric motors.

The job is significant in that it will be the first time ever that a U.S. yard will perform a repair to an Azipod unit. The vessel experienced a problem with one of its Azipod propulsion units shortly after departing from Miami on July 16. Scheduled for a seven-day Caribbean cruise, the vessel was brought back to port for observation, where Carnival engineers subsequently contacted Newport News later that week to perform the repair job. Carnival expects that the ship will resume service on August 13. Regularly scheduled for work at Newport News is M/V PFC James Anderson, Jr., a 755 ft. (230.1 m) Military Sealift Command (MSC) pre-positioning ship with a beam of 90 ft. (27,4 m), which arrived at the yard on July 21. Chartered by Maersk Lines, the vessel is scheduled to undergo hull blasting and painting; overhaul of four deck cranes; survey and repair of main propulsion equipment; repair of machinery components; cargo equipment and deck equipment survey and repair.

The vessel will remain at Newport News for approximately one month. Its trio of sisterships — Bonnyman, Baugh and Phillips — have all been drydocked and repaired by the yard within the last nine months.

San Diego-based NASSCO commenced a six-month complex overhaul this past February of USS Peleliu — the first overhaul of a U.S. Navy amphibious assault ship by a private-sector contractor. With work set for completion this August, at a cost of more than $100 million, major tasks to be performed by the yard include hydroblasting and painting of the hull and flight deck, tank and well-deck repairs, re-piping of the onboard sewage system, installation of a new air conditioning plant and a reverse-osmosis water-purification system. Various electronics modifications and upgrades were also completed onboard. The vessel's industrial work totals more than 1.2 million manhours, which is representative of 1,800 jobs.

situated on 81 acres along the St. John's River and Intracoastal waterway, now houses a 16,000- ton floating drydock, as well as a pair of two marine railways with a lifting capacity of up to 4,000 tons.

Named Sustain, the floating drydock was awarded to Atlantic per the U.S. Navy through a five-year contract. The addition of Sustain has allowed the company, which is a subsidiary of Atlantic Marine Holding Co., to repair commercial and Navy ships measuring up to 620 ft. (188.9 m) since this past May. Norfolk, Va.-based Colonna's Shipyard has been filling its facilities consisting of two floating drydocks and four railways on a consistent basis throughout the first half of 2000. Going beyond shipyard availabilities, the yard's recent projects encompass major conversions of two cable-laying vessels and the fabrication/ installation of a mid-body insert to a commercial fishing vessel. Other undertakings include significant repairs to several dredges, research vessels and ferries. Presently, Colonna's is completing the conversion and activation of Seaforce Marine's Tug Norfolk.

Subsequent to an intensive five-month conversion project at Portland, Ore.-based Cascade General, the shipyard delivered the luxury riverboat Columbia Queen to the Delta Queen Steamboat Co. on May 24. Only three days later, the 218 ft. (66.4 m) riverboat commenced its maiden voyage up the Columbia through the Snake River canyon to Lewiston, Idaho.

The vessel's conversion project began when it arrived at the yard as a mere bare hull. Transported by barge from the Gulf Coast, the vessel began its transformation process within days of its arrival. With shipyard crews working on all five decks, the vessel quickly received new stairways, walls and windows. Working on a concurrent basis were wiring and plumbing crews, who installed all utilities overhead on racks in the ceiling void, as well as television, ship-to-shore and data lines to all 105 cabins.

Columbia Queen was intended for use as a casino boat when initially outfitted with a pair of 700-hp Cummins engines for electrical generation and two 950-hp Cummins for slow-speed propulsion. In order to perform its new role as an inland cruise ship, a complete reconfiguration of the drive system was specified by naval architects Rodney Lay & Associates of Jacksonville, Fla. The company suggested a large increase in propulsion power from 1,900-hp to 4,600-hp — thus enabling Columbia Queen to maneuver through the eight locks of the Columbia and Snake Rivers, and high winds — providing a cruising speed of 12 knots.

Cascade's crew accomplished this task by opening four access panels in the main deck, and building new machinery space in the stern compartment. The existing 950-hp mains were then raised out of the engine room, and lowered into the stern where they became the auxiliaries, connected to upward-angled shafts turning azimuthing sternthrusters. The 950-hp auxiliaries were joined to Schottel azimuthing drives with fore and aft propellers fitted in new transom wells.

Contractors for the vessel's passenger and publicspaces was Hopeman Brothers of Waynesboro, Va..

who approached the project with a meticulous layout of the new floor design on the original steel deck, followed by the welding of U-section "shoe plates" to the deck wherever walls were indicated. This served as a foundation for a modular wall system, allowing a team of local craftsmen to rapidly subdivide the cavernous interior into recognizable spaces.

During sea trials, the vessel achieved a speed of 12 knots with all four engines, and was able to cruise under mains at only 10.5 knots. The combined azimuthing drives with the 350-hp bowthruster gives off a high degree of maneuverability, while fully-equipped, wing steering stations give the captain total visibility during docking.

For information on the companies in the article, please circle the appropriate Reader Service Card number. 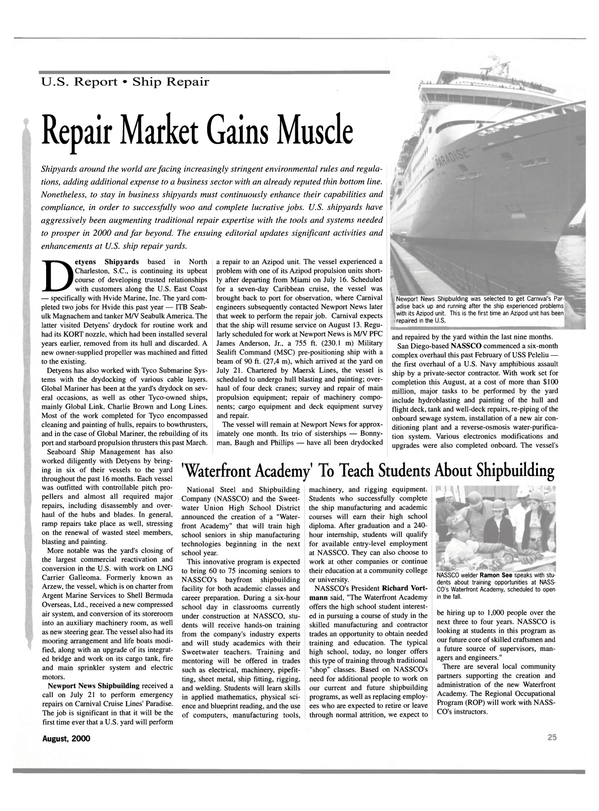