In today's tightly competitive, global shipbuilding environment, every opportunity has to be taken to squeeze cost out of the system, notwithstanding the considerable advances already achieved, especially over the past five years, in efficiency and productivity.

Each percentage point gain is to the good in an industry confronted with manifold, complex forces influencing reference price levels over-and-above the economics of supply and demand.

The fact that so much of the cost of a commercial vessel newbuild is represented by materials, equipment and machinery, typically accounting for around 60 percent of the total value, has hitherto been regarded as limiting the extent to which a shipyard can drive down costs through further improvements in processes and organization. But the era of e-commerce seems to hold out substantial new opportunities for increased cost efficiency in ship construction for those willing to grasp the nettle.

As a widely respected supplier of software systems tailored to the needs of shipbuilders and design engineering offices, the Swedish specialist firm Tribon Solutions believes that potential savings of up to 10 percent of total newbuild cost are attainable by using an Internet-based procurement system.

The tribon.com offering, to be launched at Hamburg's SMM Exhibition in September, will link yards, suppliers and shipowners in a global network. It will be centered around a Global Component Database, containing extensive, standardized data about the full universe of shipbuilding components, and modeling and design information facilities.

But the major value creation lies in the scope for savings offered by the companion, e-commerce functionality.

This will allow buyers to search for components and suppliers, issue requests for quotations (RFQs), run auctions, and place orders direct. Tribon Solutions, previously known as Kockums Computer Systems (KCS), bases its estimation of possible, aggregate savings on reductions in process costs, lower component costs through increased transparency and wider sourcing, and reductions in lead times. Major, recent initiatives in Japan and South Korea have addressed the scope for cost reduction offered by the application of the concept of the electronic market place to shipbuilding procurement. Tribon Solutions is nonetheless strongly placed in its endeavors by virtue of the fact that its nascent product will lend itself to integration with the company's existing design and information systems, in service at nearly 300 shipyards and design bureaus around the world.

Following the public unveiling at SMM, tribon.com is due to go live at the Tribon Users' Meeting on October 2 in Sweden. 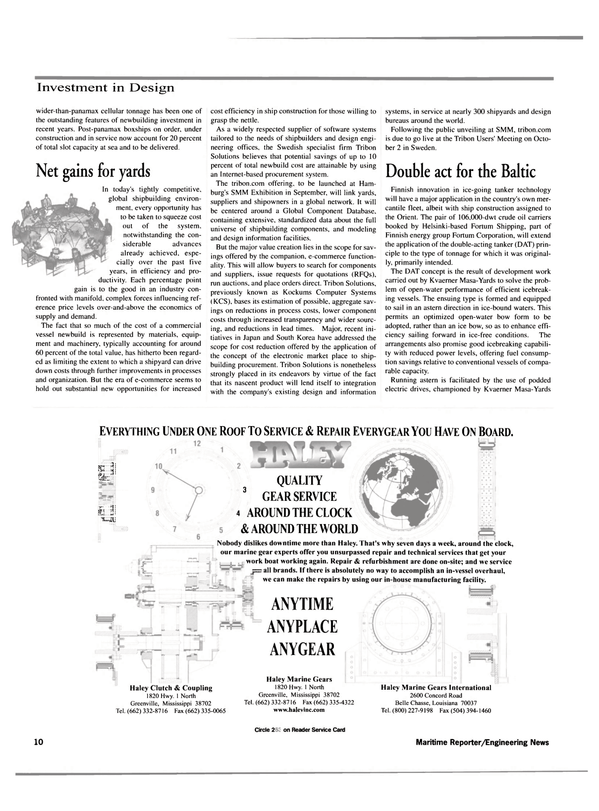