Litton Ingalls kicked off the construction process of the first cruise ship to be built in the U.S. in 40 years, with a pre- July 4th ceremony at the yard's Pascagoula, Miss, headquarters celebrating the vessel's hull fabrication.

Located among a patriotically-centered flag waving crowd was Uncle Sam, the yard's guest operator, who went aboard a plasma arc plate cutting machine to cut the initial steel plate for Project America Hull #1 -— the first in a series of cruise ships built by Litton Ingalls for American Classic Voyages (AMCV).

The commencing of the hull fabrication marked the start of the construction of the first of two 1,900-passenger cruise ships for AMCV. The vessels, which will be U.S.-owned and crewed as well, will offer exclusive service to the Hawaiian Islands beginning in early 2003. Ingalls has an additional agreement with AMCV for a twin ship to follow in 2004, as well as an option for a third in a program worth more than $1.4 billion. Initially labeled Project America, this vessel series is the result of the U.S.-Flag Cruise Ship Pilot Project, which is designed to rejuvenate the U.S.-flag oceangoing cruise ship fleet.

The project is expected to help sustain and modernize the U.S. shipbuilding industrial base, and is strongly supported by both the U.S. Department of Defense and the U.S. Maritime Administration (MarAd). The project was formulated as a result of the passage of the U.S.-flag Cruise Ship Pilot Project Statute in 1997. In order to ensure an efficient construction process, Litton Ingalls is engaged in a $130 million construction project at the yard. Already covering approximately 300,000 sq. ft. 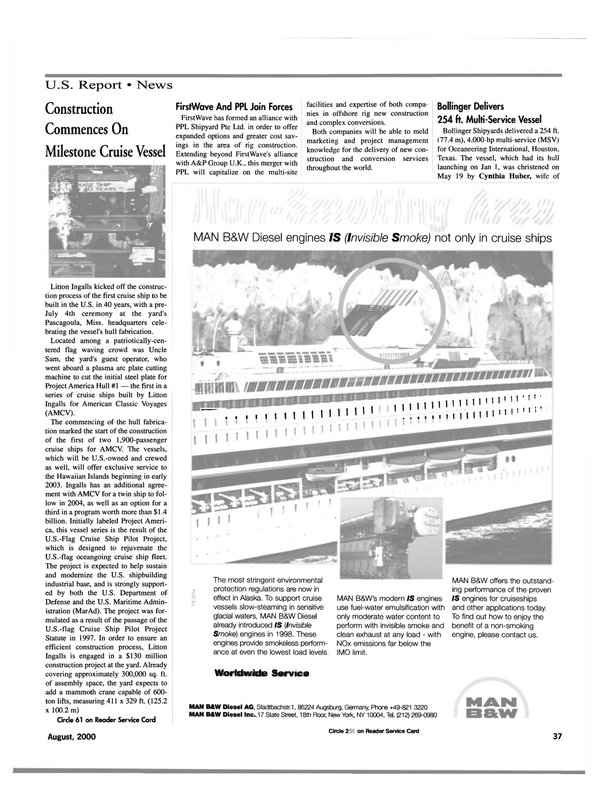