There is a groundswell of commitment for mandating the installation of "black boxes" aboard ships, so that in the in the unlikely case of a disaster, history will not repeat itself. At an estimated cost of $75,000 to $150,000 per ship, however, safety will not come cheaply If it has not already, in a few years time the name Erika will conjure many of the same emotions and financial achings as the name Valdez. The tanker that broke up and sank off the coast of France just prior to Christmas 1999 has resulted in a veritable groundswell of political and industry activity which will likely result in fundamental changes to the way in which ships — particularly those carrying oil products or hazardous materials — are outfitted and operated.

The 25-year-old ship, which before its sinking had been inspected and stamped suitable for operation by Italian classification society RINA, has had profound effects, already, on everything from tanker rates — which are soaring due to fear surrounding older tonnage, to classification societies, which are now under a public and political microscope.

While the notion of outfitting ships with Voyage Data Recorders (VDR) — a.k.a. "Black Boxes" — had previously been linked primarily to passenger-carrying vessels, since Erika the concept of outfitting other ships has picked up momentum.

"The IMO felt it was past time to take some sort of action to improve safety at sea," said Jon Fredrik Lehn-Pedersen, vice president, navigation, Kongsberg Norcontrol. "Their solution was the VDR directive." Safety, as always, comes at a price, and it's a price that most shipowners, particularly those operating large fleets, will have a tough time swallowing.

According to Norcontrol, a complete MBB system with Protected Storage Unit and Replay Unit will cost about $90,000, with commissioning and engineering not included. For a complete system stipulated by IMO and the Norwegian Ship Owners Association, expect a price range for an IEC 61996 compatible system to vary from $75,000 to $ 150,000, depending on the complexity of the system.

Much as in the airline industry, VDRs would be utilized to capture and maintain critical shipboard information that could be recovered and analyzed in the event of a ship sinking. In turn, the information could be analyzed and used to not only discover an accident's likely cause, but to enact design changes that ensure that future such incidents could be avoided.

The IMO has adopted the Voyage Data Recorder requirement as part of the revised SOLAS directive, which is scheduled to take effect July 1, 2002. It now awaits ratification by the individual national governments.

Once these sanctions are in place.

Voyage Data Recorders will be required on passenger ships as well as ships carrying hazardous cargo like oil, gas and chemicals. Within seven years all vessels over 3,000-grt must employ VDRs.

Approximately 30,000 ships will fall under the directive.

Just last month the Alliance of Maritime Regional Interest in Europe (AMRIE) presented a series of recommendations aimed at improving levels of oil tanker safety in response to recent Commission proposals on the safety of the seaborne oil trade. The AMRIE Paper calls on the Commission to lead the way in introducing requirements for Black Boxes to be fitted in all existing cargo ships, going beyond the IMO suggestion of new cargo ships only.

AMRIE believes that the speedy introduction of Voyage Data Recorders to all vessels is imperative if the Commission is to achieve a 'Safety Culture' in Shipping.

While such recommendations are generally heralded by organizations that sell, service and install the units aboard ships, the measure is not likely to illicit many cheers from the shipowning community due to the costs of purchasing, installing and maintaining the units. Despite anticipated protests regarding the matter, the shipping community is faced with a public relations crisis anytime it actively debates proposed safety measures, and will most likely be brought to the change quickly and quietly.

Such information is key to improving vessel safety, which is currently far below that of air travel, says Kongsberg's Lehn-Pedersen.

The VDR is constructed of two main elements; a data-collecting unit (DCU), which collects information, and a protected storage unit (PSU), which holds it. According to Lehn-Pedersen, the MBB's storage unit is the first to meet all maritime authority demands. The storage unit protects the data against explosion, fire and deep-sea submersion. The MBB combines expertise from both Kongsberg and Thomson CFX Detexis, developer of black boxes for the aircraft industry. The two companies have teamed for the production and marketing of the unit.

A Newfoundland developed and produced "black box" for ships is from Rutter Technologies. The recorder, officially known as the Rutter VDR-100 Voyage Data Recorder, was on display at the offices of Sigma Engineering Ltd.

recently. Sigma and another local firm.

Consolidated Technologies Ltd., came together to form Rutter, each bringing its own technology to work on the development of VDR.

"The International Maritime Organization (IMO) has already passed a resolution related to the performance standard for the mandated version of this product and the European Union has initiated a parallel initiative," says Byron Dawe, president of St. John's-based Rutter Technologies Inc. VDR will interface with other navigational aids and record positioning data, compass heading, and orders and responses to and from the engine room. The recordings will also include all radar images and all sounds.

Consilium Navigation of Sweden has also entered the Black Box fray, offering a new VDR dubbed VDR M2, which it touts as fully compliant with IMO performance standard A861 (20), and Test Standard IEC 61996. The VDR M2 also incorporates support for acoustic control of the bridge microphones, as well as support for final recording media. The final recording medium itself will be ready for delivery in early fall. Type approval of the system is in progress with BSH Germany.

The system will be able to record up to four radars, and other non-mandatory sources of information, such as multiple high-resolution video inputs and CCTV, as well as shipborne LAN data. Currently, Consilium is fulfilling large orders for the new units to both Royal Caribbean Cruises and Moby Line. 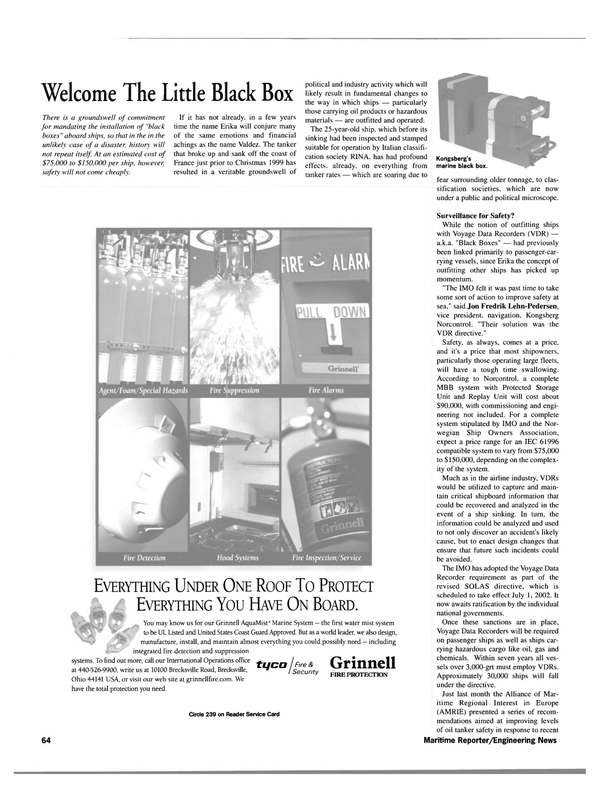