Based in Fort Lauderdale, Fla., Mayflower Ocean Lines is laying out the blueprints for the design, construction, and operation of a 75,000-ton, 2,000 passenger U.S.-Registered passenger ship.

While the inaugural company is focused on catering to the modern vacationer, with a large, custom-built vessel, the line will not market the vessel exclusively within this realm. The company has an additional mission to operate the ship in an untapped niche market, specifically for business meetings, conventions and incentive travel programs onboard U.S.-Flag cruise ships sailing on U.S.-ports-only destinations. Named Mayflower II, the projected vessel will become a venue-at-sea for the $110+ billion per year business meetings industry. Subsequent to extensive research by the line, the vessel will offer several meeting rooms, conference center, exhibit space and approximately 32,000 sq. ft. of meeting space in addition to public lounges, business centers and dining facilities.

Operating through a strategic partnership with a major hotel corporation, the passenger vessel, will operate seven-day cruises through ports in the American Caribbean from its homeport in South Florida.

The ship's meeting facilities will be comparable to that of land-based offerings, and will offer such features as live video-conferencing, satellite-based Internet access and audio-visual equipment.

Mayflower II's wireless and satellite- based technology will be provided through a partnership with a Silicon Valley communications firm.

Still in the preliminary design stages, Mayflower Ocean Lines expects to negotiate a ship-construction contract with a U.S.-based shipyard to ensure that the vessel is in compliance with all specifications, configurations and design outlines required for its service.

The company aims to work closely with the U.S. Maritime Administration (MarAd), as it plans to apply for the Federal Ship Finance Program (Title XI), which will provide for a credit guarantee by the U.S. Government of debt obligations for up to 87.5 percent of the cost of ship construction.

Machinery onboard Mayflower II will be comprised of gas-turbine engines with an Azipod propulsion system, allowing for greater maneuverability while reducing overall space requirements.

From a design standpoint, Mayflower II will focus on America's maritime heritage and history by featuring museumlike displays, such as artifacts and charts from the original Mayflower era through the last of the high style Trans-Atlantic liners. Overseeing the Mayflower Lines project is Robert Chamberlin — an 18-year veteran of the maritime and cruise industries. Chamberlin, who will serve as president/CEO on the project, has played an active role in the cruise industry in both South Florida and the Pacific Northwest. 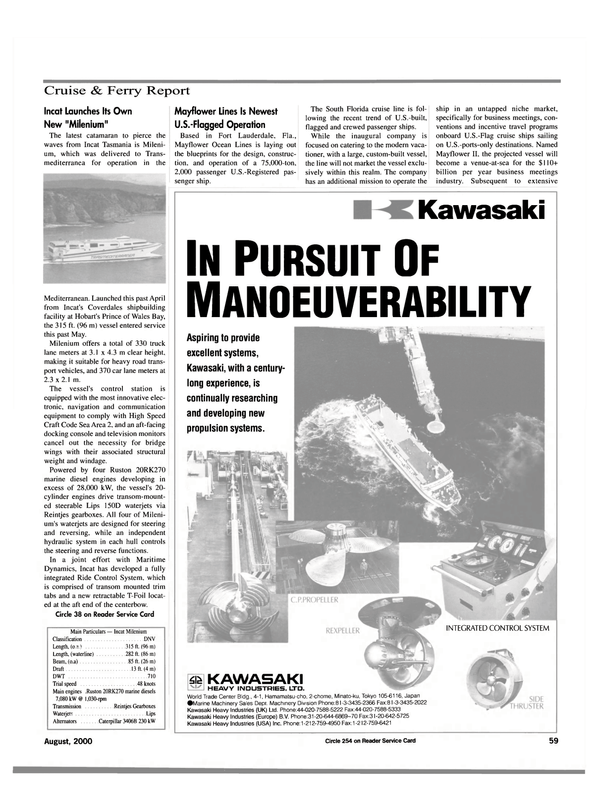