ShipDesk Strives To Carve A Niche

Phenomenal is perhaps the only word adequately to describe the rampage of new, integrated e-commerce solutions that have recently swamped the maritime industry. The marine market, which has a solid reputation of following rather than leading technological surges, has gone from "zero to sixty" in record time on the e-commerce front.

But while the industry today has a bevy of selections from which to choose — including portals for conducting every transaction conceivable, from fixing cargos to buying bunker fuel, spare parts or a ship's stores — the critical question revolves around not which choices are available today, rather which choices will be available one year from today.

While the market has been consumed with about 70 new choices, some analysts predict rapid and extreme fall-out, anticipating that a mere handful of top companies will survive. While it is practically impossible to determine which companies will emerge from the .com fray, it is safe to say that those which combine the unique mix of solid industry experience, thorough technical expertise and solid financial backing will have a better shot than other at forging a solid business.

ShipDesk.com is one of the new offerings, which seems to achieve this optimum mix. Maritime Reporter recently met in New York with Peter Rygaard Andersen, vice president, Marketing and P.R., and formerly of the wellregarded BIMCO, to discuss the creation and launch of ShipDesk.

Lofty Goals With the aim of becoming the definitive independent chartering exchange, ShipDesk faces a stiff challenge to say the least. It must battle not only the prevailing "business as usual" current which pervades the sometime technophobic marine market, but also deal with literally dozens of new E-commerce solution providers which seek to provide roughly the same services. "First, we are seeking to build an exchange with the industry rather than for the industry," explained Andersen, noting the onesize- fits-all strategy of some high-profile entrants, who are seeking to meld systems created for other realms for the maritime market. "Second, we are building a totally neutral site, versus a site that is run and operated by several major buyers and brokers." To this end, ShipDesk should seemingly succeed as it is heavily loaded with cumulative centuries of industry expertise, starting at the top with CEO Dirk Langeveld, who brings more than 30 years of senior management experience in tanker, dry bulk and container shipping with Stolt-Nielsen, Marine Transport Lines, PLM and Sea-Land.

Others in charge of the start-up including • Lars Hjaltman, ShipDesk's CTO, who was CTO at Gearbulk, the innovative bulk carrier operator, as well as 13 years of IT and Internet experience; • Fred Doll, ShipDesk's content director, who was previously director of H.

But in the fast evolving technological environment sweeping all industry today, industry experience and knowhow sometimes is not enough. To ensure that its system attracts and keeps the high-end cargo moving market it targets, ShipDesk has chosen OptiMark to provide a patented matching engine for the ShipDesk Exchange. It is worthy to note that the privately held OptiMark has proven that its technical solutions handle some of the most demanding markets in the world, including the NASDAQ Stock Market. IBM will provide systems integration.

Key to long-term success will be the ability to improve processes and continuously improve and prove the power of the electronic exchange, according to Andersen. He cites his experience with BIMCO and notes the number of legal disputes that arose simply because information was incorrectly input or transmitted; a situation ShipDesk seeks to eliminate with its streamlined processes.

ShipDesk could potentially have a leg-up on other start-ups through its ownership of netshipbrokers.com, a successful first-generation Internet chartering site. Founded in 1997, the Piraeus-based site has more than 2,500 registered members from 90 countries, and posts more than 4.500 new cargoes and 3,000 vessel positions each month.

Whitney & Co., with more than $5 billion invested in private equity, public equity, hedge funds and private and public debt, is lead financier for the operation. In fact the company received a $350 million facility available to them by Whitney & Co., CVC Capital and Citicorp Venture Capital. 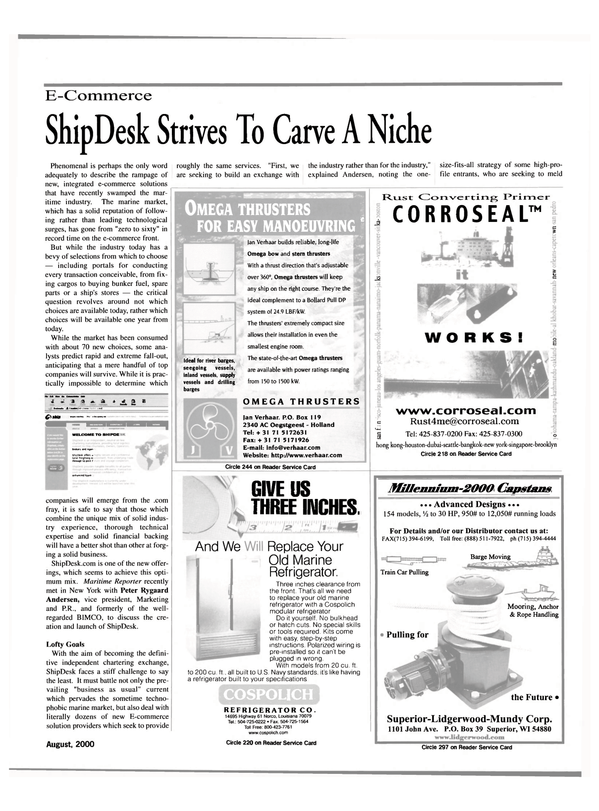