Gone are the days of the staging or boson chair rigged over the side with a crew member wielding chipping iron and paint roller. The U.S. Coast Guard identified the need for an improved system to prevent paint chip and spatter from entering the environment, and after considerable research it was decided to design and construct a steel pilot model Paint Float to provide a safe working platform to conduct topside maintenance.

(9 x 3.7 m), with draft of just 1.5 ft. (.5 m) and displacement of 32,000-lbs. It has a water ballasting system consisting of four capped 24-in. diameter steel pipes, each 12 ft. long, two per side. The system was designed so paint crews could adjust the trim of the barge to accommodate the flair or tumble home of the cutter. The transferring of ballast water was by hand pump. In retrospect, the system was inconvenient and rarely used, as the paint crews found it easier to use lines from the upper level of the scaffold to the deck of a cutter to provide heel. The painting scaffold is a two level working platform constructed of three-in. square steel tubing and plate with expanded steel deck gratings. The foot flanges of the scaffold frame bolt to raised deck pads. The bolt connection permits removal of the scaffold for repair and maintenance. In addition, the workers' safety is protected on the deck and each of two levels by lifelines that are easily arranged to suit the location of work at hand.

Bolted on deck under the scaffold is an expanded metal box providing for stowage of the anti pollution boom, which is routinely deployed during painting and fueling operations. The box was later removed, as the new and improved booms were too large for the container. This pilot model paint float has been in daily operation since 1990.

These two floats were similar in design and construction to the first float, but with minor design changes, such as replacement of water ballast with internal lead ballast.

The rub rails were changed from original split pipe to bolt on rubber "D" sections.

In 1998 responding to additional requirements for topside maintenance/preservation and increasingly stringent environmental regulations, a new float was designed and constructed at Coast Guard Island, Alameda Calif, by Coast Guard personnel.

The fourth float construction modifies the previous three designs with deck camber and replacement of cast lead ballast with commercial lead bricks secured below in a steel box. Deck drains have a more efficient closure device that will prevent paint or other toxic liquids from inadvertently going overboard, yet allow for rain water drainage. The added length provides space for vacuum collection and separation equipment for use with standard tools, and possibility for negatively pressuring the containment space. Additional protection is by double horizontal runs of rubber "D" rub rails in place of the previous single runs.

Coast Guard Yard early in 1997 began to research various methods and systems to reduce the amount of pollution resulting from topside preservation methods and initially their work concerned only the main deck and above.

As a result of their effort, pollution from painting operations have been reduced considerably on Coast Guard vessels.

The next step was to incorporate a system to accomplish the same goals as used on the hull topsides. To support this goal, the newest paint float has been constructed with the added feature of a containment shroud that totally encloses the scaffold — and is an additional component in Coast Guard's goal of attaining zero paint emissions to the environment.

The fore and aft containment shrouds can be opened and closed like a theater curtain, adjusting the opening to fit the job. The forward and aft ends of the scaffold are similarly closed in, but have doors for access. Along the port and starboard deck edges there is a fold down fabric horizontal bib, which is extended to the vessel's hull during paint operations, held in place with a series of magnets. This extension is flexible enough to allow for the relative motion of barge and cutter. The bib will allow the painting crew to recover debris which otherwise would have fallen into the water. At the forward and after corners of the scaffold there is a vertical fabric bib that can be extended to the cutter's hull and a sealing edge maintained with attached magnets. The containment enclosure will afford a secure storage space for equipment, such as an air compressor and other tools used in painting operations Control and positioning of the barge can be attained by lines to portable pad eye magnets attached to the steel hull of the cutter. A sufficient number of cleats are installed around the deck and scaffold of the float/barge to provide additional line control. During actual workaday practice, the floats are often left moored outboard of the cutter or pier after work hours, and are liable to damage resulting from wash of passing vessels.

Therefore the scaffold and barge are protected with additional installed and portable rubber fendering.

Operational guidelines require, when possible, the floats are to be secured inboard of the piers and cutters after working hours with a required number of lines of sufficient size for security with enough scope and fleet angle to accommodate the rise and fall of the tide. On account of the additional sail area due to the containment shroud, Coast Guard personnel performed an Incline Experiment soon after launch to establish the location of the vertical center of gravity and to record necessary measurements necessary to calculate a maximum allowable wind load for safe operation. This information forms the basis of a " Safe Operation Booklet," to be published by Coast Guard Yard technical personnel. Coast Guard Yard further supports the project by providing periodic on site user training for the cutter painting crews.

None of the four paint floats have been specifically designed for open water towing. However, the first and fourth floats have made a number of successful open water transits across windy San Francisco Bay that is notorious for rip tides and less than ideal sea conditions. 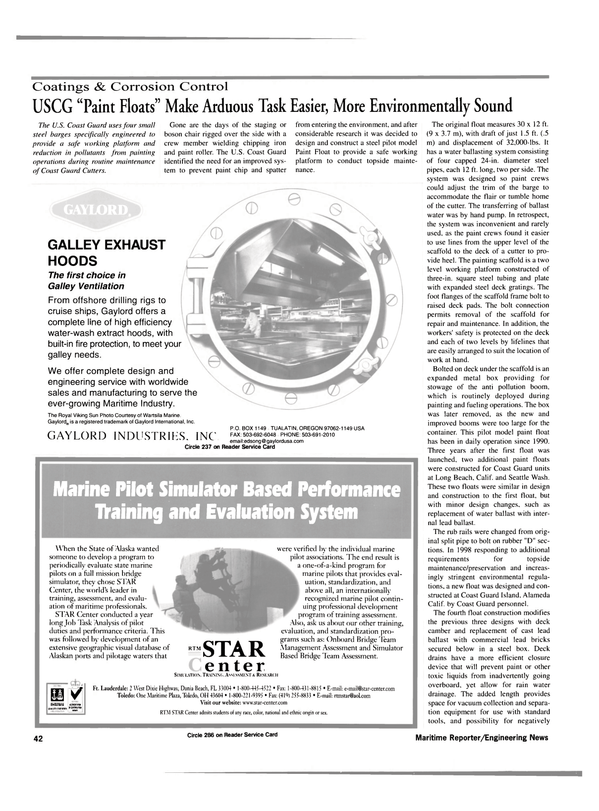