Ten years ago, a RoRo passenger service called Sealink, commenced in the Bahamas — operating from Nassau to port of Governor's Harbor on the adjacent island of Eleuthera. The vessel that performed this service was an aging 14- knot Greek ferry, which established a solid market within the RoRo sector.

Despite its healthy growth spurt, the venture ceased in 1993 resulting from rising repair costs and maintenance, specifically in the machinery department, as some engine parts had since been discontinued.

Then a group of local businessmen purchased an Australian RoPax catamaran to re-enter the Eleuthera trade. This vessel, which incidentally is also named Sealink, is from the Sea Transport Solutions (STS) design studio in Queensland, Australia.

According to Craig Symonette, chairman of Bahamas Searoad, the shallow draft and quadruple engines provide good access to shallow ports, but more importantly a redundancy coverage that their previous vessels didn't have.

While the selected one-year-old Sealink was similar to the optimum vessel, the weather on the alternative route of Nassau to Abaco generated waves up to 10 ft. (3 m) at certain times. STS designed a modified high bow and generated the CNC discs to facilitate the modification. The process of removing the old bow was undertaken by a local shipyard in Brisbane.

The vessel can transport four trucks, 24 cars and 200 passengers, while its 50 ft. (15.2 m) wide deck allows cars to load first and drive up the portside, turning around and facing aft on the starboard side. Sealink ran into its first experience with harsh weather conditions in April where it was caught in the middle of cyclone Neil east of Fiji — experiencing 25-30 ft. waves — both the vessel and crew were unharmed. 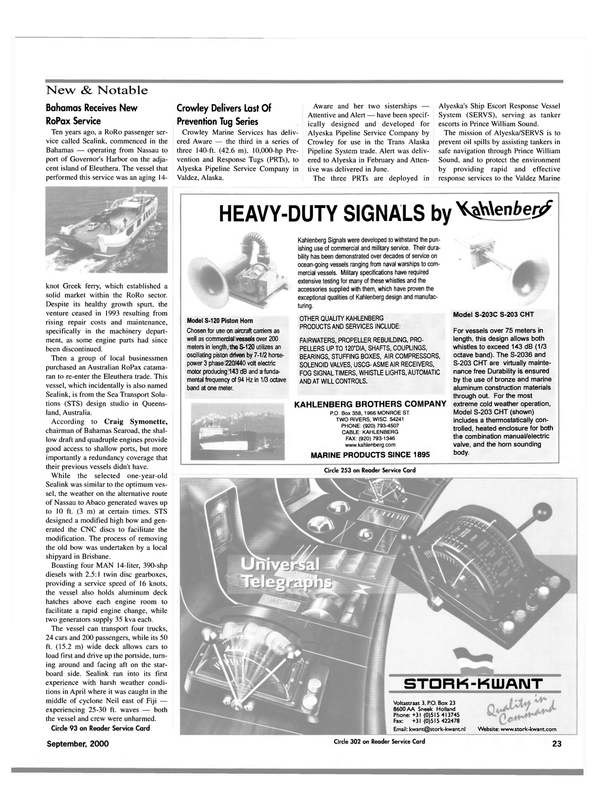