Market Forces And Technology Will Shape The Futre Of Shipping

We are living in a time of vigorous world growth and the liberalization and globalization of world trade, and no industry will be more central to this process than shipping. As in the past, our industry will be driven by the requirements of the market and by advancing technology, and over the next decade we can expect evolutions in the development of all types of ships.

This is also a time of transition from prescriptive rules and regulations to the creation of an industry wide safety culture based on self-regulation and selfresponsibility, and the classification societies will be at the heart of this.

What sort of technical advances can we expect to see in the main types of ships throughout the next 10 years or so, and what will be the problems and risks involved?

Containershipping The most dynamic development will continue to be in the field of container ships. Today the world fleet of 2,600 fully cellular ships of 53 million-gt accounts for nearly 10 percent of world merchant ship tonnage. Some five years ago this was only 5 percent. Now roughly 70 percent of general cargo is containerized, and it is expected that this will grow to more than 90 percent by 2010.

The economies of scale are highly relevant to this ship type, and that is why we will see increasingly larger ocean carriers and feeder ships. Panamax ships of more than 4,800-teu are already in service, and there will be innovations to increase the capacity of these ships to more than 5,000-teu, such as 12 abreast stowage, a reduction in double bottom height and the quantity of ballast water, and modifications to transverse bulkhead configurations.

Propulsion Power Soon we will see the introduction of Post-Panamax megaships of 8,0000-teu or even larger. Indeed, a stretched Maersk K-class vessel can already carry more than 7,000-teu. A comprehensive design project by a German consortium, showed that it is possible to cope with the structural problems of the 8,000-teu ship and beyond. Limitations on the development of mega containerships are more likely to arise from the capability of port cargo handling facilities and inadequate depth of water, along with the maximum available size of propulsion plants. The largest slow speed diesel engines currently available with a maximum output of 68,000 kW (95,000- bhp) provide adequate propulsive power for a Post-Panamax ship of 8,000-teu for a speed of up to approximately 25 knots.

Some earlier considerations for even larger engines of 14 or 16 cylinders, possibly using a V-arrangement for the cylinders in order to reduce length, have been reactivated by engine manufacturers.

Two engine plants would have to be installed for even larger and faster ships.

However, once we decide on a twin propulsion design, maximum efficiency will again be achieved with two of the largest engines available. For a design speed of 25 knots, this leads to a vessel of approximately 15,000-teu with a total power output of 190,000-bhp.

On the topic of engines generally, the concept of "green" ships is well recognized and the manufacturers, class and the industry generally will be challenged to meet the growing international drive to reduce marine diesel emissions.

There will also be an increasing propensity to use other advanced propulsion systems such as diesel electric, gas turbines and waterjets for fast and special- Circle 234 on Reader Service Card ized services.

There are already several projects for fast trans-ocean shipment of containers with speeds up to 40 knots and more.

Speed is also the driving force in the development of container feeder ships, with orders for fast cargo cats probably imminent.

With the continuing containerization regarding various cargo of all types, we will see the further introduction of specialized containers and containerships such as fully containerized reefer vessels.

Another area where further development is expected is the open top containership, which is being very successful from an operational and safety point of view. Unfortunately, the numbers of this type of vessel are being constrained artificially by high port dues based on the GT of these ships with their extra freeboard.

The boom in cruise vessels and RoRo passenger ferries seems set to continue, along with the trend towards even larger ships. Strength of hull and size of machinery are not problems even in vessels, which can carry more than 3,000 passengers and 2,000 crewmembers.

However some risk may exist due to their sheer size and scale of operation, and in the execution of emergency evacuation.

The problem is recognized by both the IMO and IACS and risks are being analyzed objectively, and impartial solutions will be found. We will see more fast monohull passenger ships such as the 24,500-gt Olympic Voyager with a service speed of 27 knots, which recently entered service. Also the rapid growth will continue of HSCs of more than 328 ft. (100 m) and with speeds of some 40 knots, for both passengers and cars, including both monohulls and catamarans.

Corrosion Corrosion is a central problem with all ships, although less so with types such as container vessels and gas carriers.

Corrosion is the result of the aggressive nature of the sea environment together with poor maintenance. Often the class societies are criticized for allowing older ships to operate, but it is important to remember that it is the condition of the vessel, which may make it a substandard vessel. Corrosion prevention will be a priority over the next 10 years or so. Of course, this is expensive, and the necessary investments will only be made if everything is done to prevent substandard owners from continuing to operate without extra cost.

Tankers and bulk carriers are the two types of ships most affected by corrosion.

These ships will continue to comprise a large portion of world tonnage. It is a fact that ship accidents decreased during the '90s, but that accomplishment is eclipsed in the eyes of politicians and the general public by dramatic accidents such as the Erika — an accident caused by corrosion and probably a lack of maintenance.

Under present legislation, single hull tankers above 30,000-dwt will be phased out by 2018. The main advantage of the double hull is that the cargo is not in direct contact with the outer shell and bottom. But the ships still only have a single deck, which can corrode exactly like a single skin. So we will have to do more. Class will be more involved with corrosion protection, possibly in a leading role.

The predictions are that after moderate newbuilding activity in the first part of the decade, the need for new and additional bulk carriers will increase again.

Corrosion and damage from poor loading and discharging practices have led to serious structural problems, and there are substantial pressures for the safety of these vessels to be improved. IACS derived decisive measures based on detailed studies, which were adopted by the IMO. These include higher safety margins particularly for double bottom and bulkhead structures to allow for accidental flooding. For the future we may expect that double hull designs, which are safer against water ingress, will become dominant also for bulk carriers.

But ways will have to be found to reduce the rough treatment during loading and unloading, and this will include more extensive use of self-loading systems.

Gas carriers have an excellent safety record thanks to close co-operation between designers, shipyards and class societies, but also here new design ideas will be developed resulting in further progress in efficiency and safety.

The large fleet of aging general cargo ships is being replaced by modern mutipurpose carriers or by pure container ships. The multipurpose ships have become optimized multifunctional vessels, many of them with sophisticated design and operation aspects. Because they are equipped to carry containers in the holds and on deck, they are being employed on many routes as feeder vessels in the container transport chain.

The central role of classification societies in ship safety will continue — not least because they have the most resources of technical expertise and feedback from their worldwide networks.

Because of the reduced engineering resources of shipowners and yards, the engineers from class will play an increasing role in the future.

Class too will adapt to the economies of scale, which have caused many owners and yards to amalgamate. We may well see in the near future consolidation among class societies with at very least co-operative agreements between them.

The policies of the individual societies are going to be increasingly shaped by those agreed collectively through IACS — for to cope with future tasks our industry must act in unison. Additionally class and IACS must respond to the increasing interest and involvement of politicians and the public united in safety at sea.

Great strides have been made in recent years to better co-ordinate the activities of the class societies and to standardize our activities. Important new policies emerged from the Erika disaster, which will bear fruit no doubt in the future.

Further improvements in safety at sea and the elimination of substandard ships can only be achieved if the entire industry — owners, operators, charterers, yards, insurers, industry bodies, the IMO, Hag states and port states — work together for collective solutions. IACS today considers all these groups to be partners in this endeavor. Class societies individually and within IACS will consult and work closely with them as rules and regulations are adjusted and new policies developed. 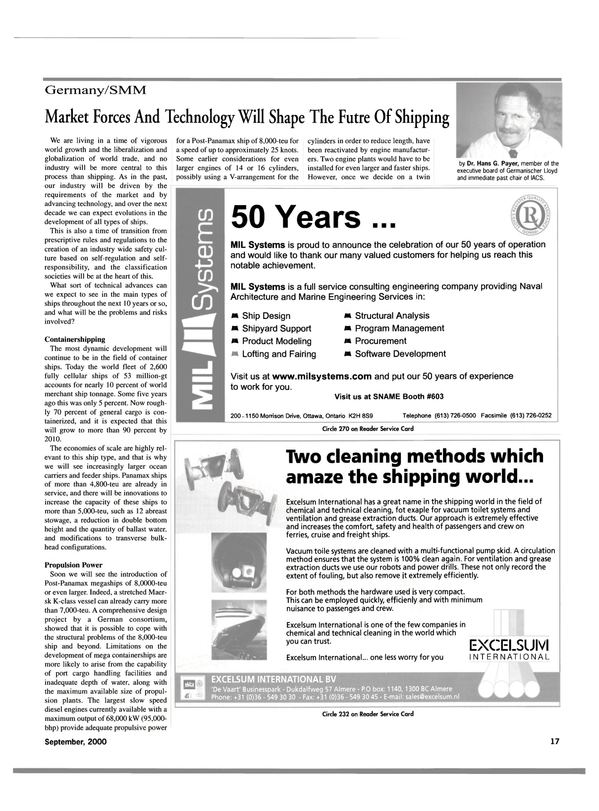 Read Market Forces And Technology Will Shape The Futre Of Shipping in Pdf, Flash or Html5 edition of September 2000 Maritime Reporter