The Littoral Combat Ship: Force Multiplier for the 21st Century

The Littoral Combat Ship (LCS) is a new ship design concept being considered to combat emerging threats in the littoral.

It will be a relatively small, focused-mission combat ship that will revolutionize the way the U.S. Navy builds and fights ships. LCS, with its high speed, shallow draft, and maneuverability, will be optimized to serve as a force-multiplier for other larger, multi-mission ships.

Old Problem/New Solution The U.S. Navy in the first years of the 21 st century faces a similar problem that confronted naval powers at the turn of the last century. The capital ship then was the Dreadnought. Its mere presence could have an impact on events at sea and ashore. In an age of direct, line-of sight operations, the missions of the fleet required naval forces to operate in the littoral, that area of naval operations close by friendly or adversary coastlines.

The Royal Navy, and other navies with capital ships, came to realize that when their capital ships were operating in the littoral, they were increasingly vulnerable to a much smaller and less expensive weapon: the motorized torpedo.

The U.S. National Military Strategy requires the Navy to project power ashore, assure access, and support fastmoving forces. To do this, the Navy must position itself in the littoral with persistence in the face of a rapidly changing, highly technical and sometimes unconventional or asymmetrical threat. The need for assured access for U.S. forces has been recognized for some time. However, the events of the last two years, to include the recent war on terrorism, has brought a sense of focus and energy for the need to provide assured access in a very dangerous and unpredictable environment.

A "Family" Approach The LCS is a key element of the Navy's innovative Surface Combatant Family of Ships (SCFOS) approach.

The family includes the multi-mission DD(X) destroyer, CG(X) cruiser and the existing AEGIS fleet of guided-missile destroyers and cruisers, and the focusedmission LCS. The Family of Ships concept evolved from the Mission Need Statement for the U.S. Navy's Surface Combatant for the 21st Century, and has two major advances from previous shipbuilding programs. First, the SCFOS approach can easily adapt to, or incorporate, advances in technology with less technical risk and without major modifications to the ship's structure. Secondly, the focus on a "family" of ships provides the design flexibility to fulfill all operational requirements across the broad spectrum of naval warfare areas.

Technology is maturing at such a rapid pace that traditional ship designs and installed combat systems can become outdated even before entering the fleet in significant numbers. The life cycle of most U.S. Navy ship classes, from initial concept design to decommissioning and disposal of the last ship can reach up to 40 or 50 years, sometimes more.

The Navy thus faces considerable challenges in ensuring that its ships stay ahead of advancing threats while remaining highly capable and operationally relevant.

Currently, the means available for modernizing ships' systems is through field changes to machinery and weapons systems. Although very effective in keeping installed systems up to date, this means of enhancement is not intended to replace entire legacy systems with modern ones. As such, the Navy's new surface combatants will ensure adaptability through modular design, spiral development and open architecture. Modular design will enable a ship like LCS to remain at the highest state of technological readiness throughout the ships' life span.

Since WW II, for example, despite the fact that "programmed" surface combatant operational lifetimes grew to as much as 35 years, the Navy rarely retained surface warships past the 26th year of service regardless of the hull's remaining service life.

This problem could be overcome by the LCS design. As new technology matures, it will be installed in modules for test and evaluation. Once the technology has been proven ashore, the modules can be installed in ships for at-sea testing and integration with other systems. When the risks of installing the technology have been mitigated to an acceptable level, operational units can replace legacy models with more technologically advanced ones. Moreover, the LCS design could allow for modules to be replaced without putting the ship in dry-dock, cutting holes in the side of the ship, or running lengths of cables and piping throughout the ship, which will reduce modernization costs. This process will not only be used to upgrade installed systems, but also for changing out entire systems. It will also significantly reduce the risk of investing in new technology by not jeopardizing an acquisition program on the success or failure of a single technology.

Modularity also enables the Force Commander to tailor LCS for the anticipated threat in the theater that the force will deploy. LCS will optimize its configuration in secondary mission areas for a specific threat area, adding significant and focused capability to the force and greatly enhancing war fighting capability and flexibility.

From DD21 to LCS The DD21 was the forerunner to the Family of Ships program. The DD21 designers faced a challenging task: design a ship to perform traditional multi-mission tasking such as Anti-Air Warfare, Anti-Surface Warfare, and Anti-Submarine Warfare.

In addition, the DD21 was required to conduct Precision Strike, Volume Fires, and In-Stride Mine Avoidance.

These and other questions resulted in the Navy restructuring its next-generation surface combatant program in November 2001. Instead of designing one ship to do everything, the Family of Ships will disperse capabilities between the relatively large multi-mission DD(X) and CG(X); and the smaller, faster, focused-mission LCS. While DD(X) and CG(X) will conduct traditional surface warfare missions — as well as Precision Strike, Volume Fires, Area Air Defense, and Ballistic Missile Defense — the LCS will take on the unique challenges associated with fast-paced, shallow-water littoral operations.

As a focused-mission ship, LCS will also complement today's AEGIS ships (Arleigh Burke-class destroyers and Ticonderoga-class cruisers) by engaging the enemy in areas where it would be impractical to send larger ships. Speed, shallow draft, and maneuverability will allow LCS to employ its mission packages much more effectively and keep the larger, multi-mission ships from being placed in sub-optimum positions. As such, LCS is optimized to serve as a force-multiplier to the other SCFOS members.

As a ship specifically focused on the mission of providing assured access and countering the threat of mines, small boats and diesel submarines, LCS offers the opportunity to significantly optimize warfighting abilities in these areas and employ a family of unmanned vehicles to do these missions. LCS could also be capable of conducting secondary missions such as Maritime Interdiction Operations and Homeland Defense (MIO/HLD); Special Operations; Command, Control, Communications and Computers, Intelligence, Surveillance, and Reconnaissance (C4ISR); and logistic support for movement of personnel and supplies.

To accomplish its assigned missions, LCS will need characteristics that are tailored to fight in the littoral.

In addition to its speed, shallow draft, and maneuverability, LCS will operate as part of a netted and distributed force. In this net-centric force, LCS will need to provide near-instantaneous flow of useful tactical data to a maritime or ground component commander. This netted architecture will allow participating units to share data from key sensors and weapons scattered by various units throughout an operating theater. LCS will benefit from the combined sensor data from all platforms, keeping LCS' installed sensors to a minimum and reserved for self-protection and critical mission capabilities.

LCS is expected to have a flight deck and hanger for operating and maintaining manned rotary wing aircraft.

The flight deck will also be able to operate, fuel and support Unmanned Air Vehicles. Indeed, LCS will make extensive use of a variety of organic manned and unmanned aerial, surface and underwater vehicles.

These organic vehicles will be fully netted to the ship in order to facilitate real-time data exchange and support littoral warfare combat operations. And, they will provide inherent modular-mission capability through easily interchangeable vehicle payloads. Finally, the ship's configuration will allow for the rapid launch and recovery of boats and SOF craft while the LCS is operating at tactical speeds.

To enhance mission accomplishment and survivability, LCS can leverage the latest in human systems interfaces, integrated through a robust local-area network.

The Navy recently asked industry to help explore different approaches to meeting the requirement for a focused-mission, high-speed ship optimized for littoral combat. The information gained through these studies will be reviewed and may be used to formulate future ship requirements. The Navy will select up to six contractors to conduct the ship concept design studies.

Each proposal must provide one specific concept for a ship that could be built in the United States, but foreign industry can participate in the concept study effort.

While the proposals sought by the Navy are not concepts for a specific ship that we build, they will be a critical step in defining what kind of platform will best help us meet the challenges of operating in the littoral and meeting mission requirements.

The result of all of these efforts will help the Navy find a best-of-breed solution to the requirements of a high-speed focused mission ship operating in the littoral.

An All-Around Solution With its high speed, shallow draft, maneuverability, and modular characteristics, LCS will be optimized to confront littoral threats that can deny access of U.S.

forces to a given theater of operations. It will offer unique capabilities that no other platform can provide.

Employing netted sensors and organic weapons for self-defense, LCS will break new ground for use of remotely employed sensors and delivery of weapons by a family of unmanned vehicles operating on, above and below the ocean's surface. Its modular, focusedmission design will enable rapid insertion of new technology throughout the ship's service life. In short, LCS has the potential to be a key element of the U.S. Navy's Surface Combatant Family of Ships. 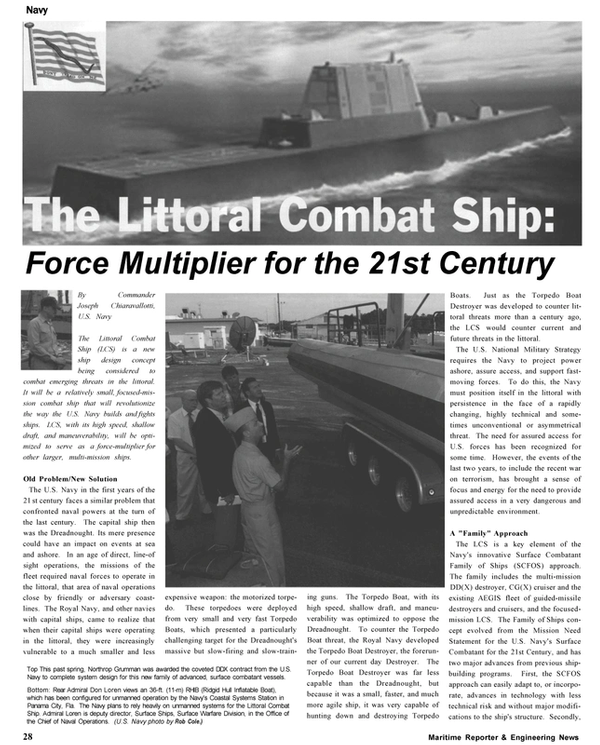