M a r i t i m e Dominance in the 21st Century calls for naval forces that can project power forward, provide assured access in the littoral environment and support a wide variety of joint and combined operations. To meet this challenge, the U.S. Navy's surface combatant fleet of the future will be a "Family of Ships." Defeating and deterring future national threats requires a broad range of capabilities from long-range missile defense, precision strike and volume fires to assuring friendly access in the dangerous littoral regions of the world.

Transformation of the future fleet will start with the DD(X) technology development effort, from hull and propulsion to sensors and weapons.

DD(X) will provide sustained, offensive, distributed, and precise firepower at long ranges to support forces ashore and to conduct time-critical strikes on land targets. DD(X) will feature the Advanced Gun System (AGS), a fullyautomated 155-mm gun with advanced munitions that can hit targets upwards of 100 miles away with pinpoint accuracy.

The DD(X) Integrated Power System (IPS) and its electric-drive propulsion will significantly reduce the amount of interior space traditionally required for shipboard engineering and propulsion, while reducing manpower and other operating costs. IPS will make DD(X) more survivable, too, as the distributed, reconfigurable power system will have greater redundancy. The integrated power system may also provide sufficient power for future directed energy weapons.

While DD(X) will be larger than current destroyers, its advanced automation and human systems integration will enable it to have a much smaller crew, resulting in more room for shipboard habitability as well as improved quality of life/service.

Featuring a tumblehome hull and unique superstructure design, DD(X) will rely on full-spectrum stealth, to include radar, acoustic, infrared, magnetic, and visual signatures. With state-of-the-art network-centric information technologies, DD(X) will operate seamlessly with other naval, ground, and land-based air forces.

A Cruiser Conversion program for the Ticonderoga-class will facilitate bridging the gap between the current fleet and the new family of surface combatants.

They will get the new 5-in./62-gun, Tactical Tomahawk missiles and upgrades to command and control capabilities, enabling them to perform Area Air Defense Commander (AADC) missions.

The converted AEGIS cruisers become of paramount importance to provide the Fleet with substantial improvements in combat capability, manning reduction potential and readiness, as well as service life extensions.

The Arleigh Burke destroyers will comprise a significant portion of the surface combatant force structure. New DDG's will continue to enter the fleet for years to come. As the DD(X) technologies are matured and become available, evolutionary upgrades will be considered for the AEGIS fleet.

With its unique open-system architecture, modular design approach, and adaptability for spiral integration of combat systems and mission package upgrades, LCS will be uniquely suited to meet the near and future requirements for assured access.

(See related article this issue.) The Navy hopes to be able to award detail design and construction contracts for the first two LCS ships in the FY05 - FY06 timeframe, with deliveries scheduled in FY07 and FY08.

Construction of the first DD(X) is planned for FY05 with scheduled delivery in FY11. The CG(X) will be a follow-on program to DD(X), with a DD(X) scalable hull form and a common propulsion plant architecture. Both ships will use many of the same innovative technologies to optimize crew size, increase Joint "Command, Control, Communications, Computers, Intelligence, Surveillance and Reconnaissance" (C4ISR) connectivity, and reduce operating and support costs.

The CG(X) will replace Ticonderoga-class cruisers as they retire.

The future family of ships, DD(X), CG(X) and LCS, along with the Navy's in-service Aegis combatants, will provide a broad range of transformational capabilities to assure warfighting success across the entire spectrum of the maritime and littoral battlespace. When not acting independently, these future warships will operate in a jointly netted, distributed warfighting environment to maximize their overall effectiveness. 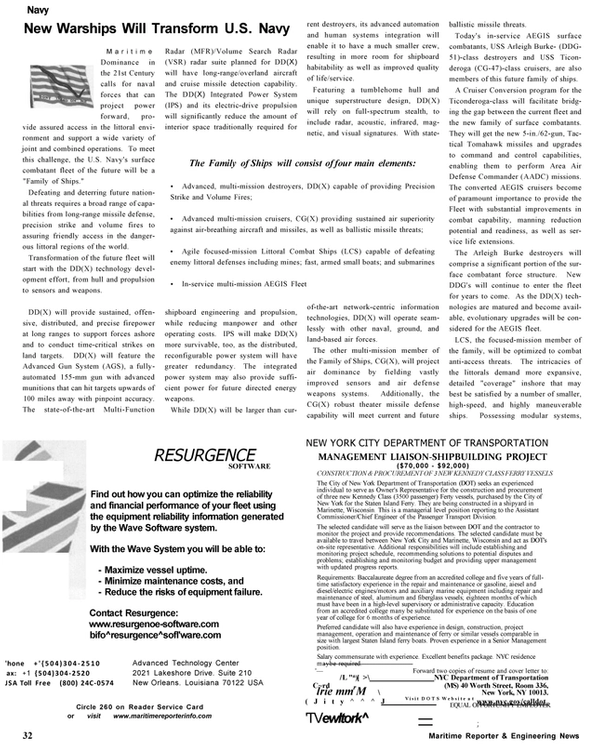