A team from the Naval and Ocean Engineering Department at the Federal University of Rio de Janeiro (UFRJ) has won the first International Student Offshore Design Competition sponsored by the Society of Naval Architects and Marine Engineers (SNAME) and the Ocean, Offshore and Arctic Engineering Division of the American Society of Mechanical Engineers (ASME) with their entry "Preliminary Design of the 'Maracana' FPSO Unit." The entry was one of eight projects submitted by students from universities around the world.

The UFRJ team was honored with a cash prize of $1,500 and the opportunity to present the Maracana floating production/storage and offloading unit (FPSO) to industry at the SNAME Annual Meeting in Boston on September 25-28.

"The biggest challenge for us was this was not a conversion of an existing ship but an FPSO design from the beginning," said Joao Alberto Rangel de Almeida, Team Leader.

The students used research and data from Petrobras to base their design model on a site- specific structure located offshore Brazil in the Campos Basin.

With Maritime Reporter & Engineering News serving as ISODC's official publication, the corporate sponsors for the competition were ABS (American Bureau of Shipping), Conoco and Projemar. 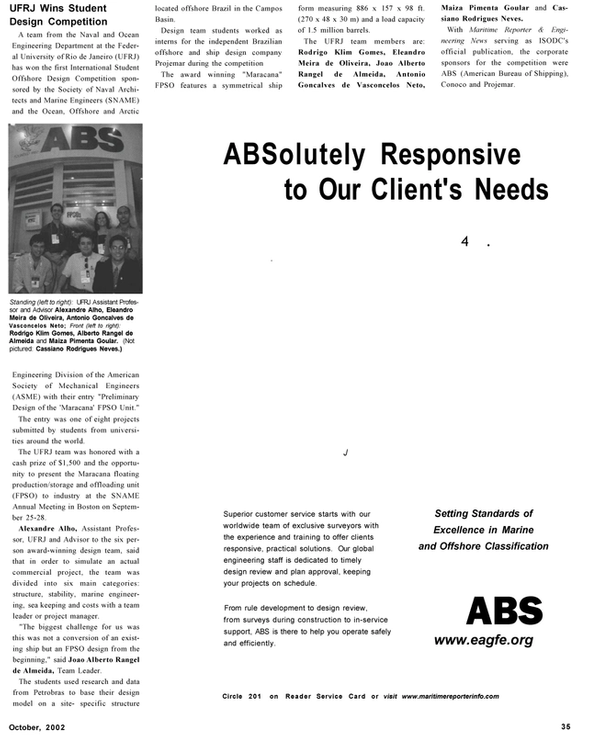