The Risks of Cargo and Maritime Security

The U.S. Government, and particularly the U.S. Customs Service, has focused on cargo as a major risk factor with regard to the maritime security of the United States. The following is an outline of some of the measures being adopted or considered by the Customs Service in its efforts to enhance maritime security and the impacts of those measures on shippers, intermediaries, and carriers.

The measures can be grouped into three general categories: inspections, risk reduction, and container security.

Inspections occur both in the United States and abroad and involve both use of technology and physical inspection.

Risk reduction is an effort to identify at an early stage which cargos might present a risk to U.S. security. Container security is a specialized program to develop containers and related devices that will resist intrusion en route and provide some warning or indication if intrusion occurs.

Inspection Methods Vary from Hands-On to High Tech Traditionally, the U.S. Customs Service relied on physical inspection of cargo as the primary method to determine whether what was being imported into the United States matched what was on the bill of lading or other documentation.

In part because compliance rates were fairly high, physical inspection rates fell to as low as two percent. This means that 98 percent of the cargo being shipped into the United States was not examined by the federal government, which placed heavy reliance on the good faith of the shippers and the accuracy of the documentation. That worked adequately when the only risk was commercial underreporting and the occasional smuggler. The terrorist attacks of September 11, 2001 dramatically changed the risk factors and led to a reexamination of government oversight provided to imports into the United States.

They are far faster than physical inspection and better able to detect certain threats. X-ray machines that examine entire containers at one sweep are being used. These devices, which operate at a wavelength of about 10-10 m in the electromagnetic spectrum, can detect large and small objects inside containers and packing crates, allowing non-intrusive inspection. Drawbacks are that the devices emit fairly high levels of radiation and that the X-rays cannot penetrate certain materials, such as lead. Gamma-ray machines are being similarly employed to conduct nonintrusive inspections. Like X-ray machines, these can examine an entire container in one operation. Gamma- rays operate at a wavelength of less than 10-11 m and can't detect small objects with the same capability as X-rays. On the other hand, traditional shielding, such as lead, does not generally prevent gamma-ray devices from examining the contents.

Devices are used to examine a variety of emissions from cargos and their containers.

Radiation detectors are now worn on a regular basis by Customs inspectors and others, such as U.S.

While these X-ray machines and other devices may serve as an excellent early warning system, they may also provide false positives. Two recent examples involve a shipment that arrived in Miami in August and the container ship detained in New York in September. On August 8, the Customs Service was conducting a random X-ray examination of a container that had arrived from Israel.

The X-ray revealed what appeared to be munitions. The bomb squad was called in and the container was carefully opened. Inside, along with other household goods, were two metal flower pots.

Neither was dangerous, but a portion of the port was shut down during the inspection. On September 10, U.S.

Coast Guard personnel were conducting a routine examination of the container ship Palermo Senator when their radiation detectors were activated. A security zone was immediately established around the vessel, which has recently arrived in Port Elizabeth, N.J. from Valencia, Spain. The vessel was escorted to anchorage near the Ambrose Light Tower where it was fully examined by personnel from the Coast Guard, Customs Service, FBI, Department of Energy, and U.S. Navy Seals. It was eventually determined that the radiation was being emitted by a container carrying clay tiles from Italy. Low level radiation is sometimes found in clay deposits. It has been reported that the vessel operator incurred demurrage costs exceeding $50,000 while the vessel was being examined.

This initiative has three components: (1) adding new criteria to Customs automated systems that reflect the latest information about possible terrorist activities; (2) ensuring that all manifests are processed through the Automated Targeting System and reviewed by trained personnel; and (3) standardizing Customs procedure and practice when the system pinpoints a high-risk shipment. All high-risk sea cargo containers will be examined by non-intrusive inspection technology and the integrity of the container seal and the container itself will be examined. The goal is to quickly segregate cargo into general and high-risk categories, so that general cargo can be processed rapidly.

Additionally, the Customs Service relies on intelligence reports, suspicious trading patterns, suspect paperwork, and reports from government agencies, such as the U.S. Coast Guard, to determine which containers and other cargo should be subjected to increased scrutiny.

Cargo Inspections Abroad Suspect containers scheduled to shipment to the United States are being identified before they leave the foreign country under two current programs: the Container Security Initiative (CSI) and the U.S.-Canada Smart Border Plan.

The United States and Canada have developed a bilateral approach because so much cargo bound for one country arrives from overseas initially in a port of the other country. Thus, U.S. Customs Service personnel are assigned to various Canadian ports and personnel from the Canada Customs and Revenue Agency are assigned to various U.S. ports. The ports currently involved in the Smart Border Program are Newark and Seattle in the U.S. and Vancouver, Halifax, and Montreal in Canada.

The U.S. Government recently proposed to the International Maritime Organization (IMO), a specialized agency of the United Nations, that port states be authorized to stop and examine ships on the high seas when those ships are bound for a port of the port state.

Risk Reduction The U.S. Customs Service, along with numerous other federal agencies, is working to reduce the risk that terrorists will attack the United States by means of cargo shipped in international commerce. Increasing use is being made of intelligence-gathering through a wide variety of sources so as to identify potential problems before they manifest themselves. Two problems with such intelligence relate to data overload and quality.

The Advance Manifest Filing initiative proposed by the U.S. Customs Service on August 8, 2002 has the potential to drastically change operational methods for all parties involved in U.S.-foreign trade. Under this initiative, if adopted, vessels carrying any cargo bound for the United States would be prohibited from loading the cargo onboard until 24 hours after they had submitted their manifest to the U.S. Customs Service for review. The concept is that the Customs Service would then have time to identify suspect cargoes and prevent their loading until thorough examination could be made. Doubts have been raised about whether the U.S.

Customs Service could actually process in a timely manner the thousands of manifests it would receive daily. Additional concerns have been raised respecting non-containerized cargo, the role of non-vessel-operating common carriers (NVOCCs), freight remaining onboard for delivery to another port, and trade dislocation due to disparate treatment, among other things.

In many cases, cargo is not delivered until several hours before the vessel is due to depart. Obviously, the vessel's manifest cannot be prepared until the cargo has been delivered and the accompanying bill of lading presented. Time is money and the time lost in compliance with the proposed rule will be costly.

The Customs-Trade Partnership Against Terrorism (C-TPAT) is intended to provide shippers, carriers, intermediaries, and others involved in U.S.-foreign trade with an incentive to improve supply chain security.

In return, participants may have a reduced number of Customs inspections when their cargoes arrive in the United States and access to the C-TPAT membership list, among other things.

Operation Safe Commerce is a more intense version of C-TPAT. Under this Operation, a container is spe- daily sealed and monitored from closure until arrival at its final destination.

The Operation is in the early development stage, but commenced with a shipment in June 2002 of automobile tail lamps from the Osram Sylvania plant is Nove Zamky, Slovakia to another plant in Hillsborough, N.H. Look for this Operation to be expanded as monies and technology permit.

Container Security As demonstrated in Operation Safe Container, the emphasis is shifting from trying to find the needle in the haystack to monitoring the haystacks to keep needles out. The federal government and groups in the private sector are funding efforts to develop economical tamper-proof seals for use on containers.

These seals would show if an attempt had been made to enter the container subsequent to sealing. Global positioning system (GPS) transponders are being developed for use on containers in an attempt to track those containers on a real-time basis to determine if they deviate from their intended track or are delayed for an inordinate amount of time. New containers are being developed that would be more tamper-resistant than current ones. After all, the doors are not the only way for a determined party to enter a container. These initiatives, when implemented, will not only raise the cost of container use, but will rapidly make old containers obsolete.

Summary The traditional methods utilized with respect to sea-borne cargo in the U.S.- foreign trade will no longer suffice. Changes have been imposed because of the September 11, 2001 terrorist attacks and the re-examinations resulting therefrom. The integrity of U.S. supply chain has improved dramatically since that date and will continue to improve. Efficiency, though, has suffered and will continue to suffer until parties involved in the process implement new business models that accommodate the new security requirements while capitalizing in new technology.

In the meantime, unresolved issues include who ultimately bears the cost of added security measures and who bears the costs related to detention of a vessel (and delay of its cargo) due to unscheduled Customs examinations (e.g., box pulling). 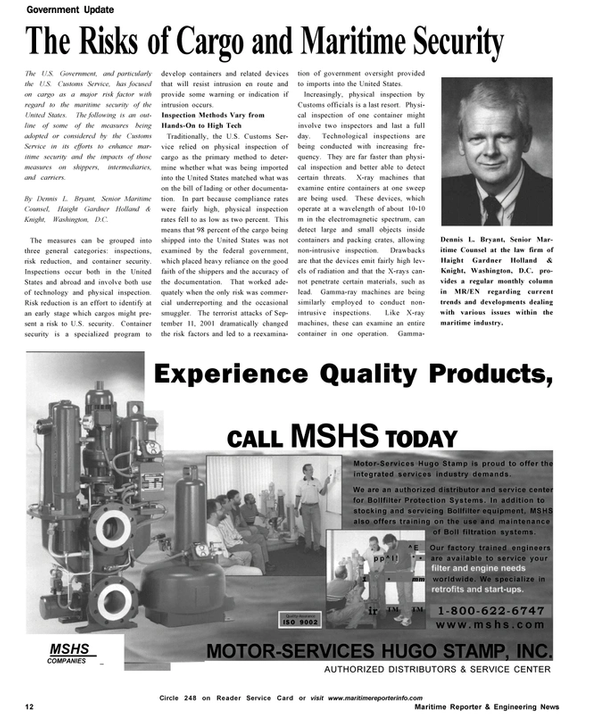 Read The Risks of Cargo and Maritime Security in Pdf, Flash or Html5 edition of October 2002 Maritime Reporter