Where Everyone is A Celebrity

That is the basic business principle that has sustained Dietmar Wertanzl, senior VP of Fleet operations for Celebrity Cruises, since he began his career with the industry in the late 1970''s. Not even 30-years old, Wertanzl began on what was then known as Norwegian America Line's Vistafjord as a dining room steward, so swept up by the magic of sea travel.

By Regina P. Ciardiello, managing editor Wertanzl's philosophy is simple. Treat your employees and customers the way that you would want to be treated. He always falls back on this simple notion: In order to run a successful fleet — from both the hospitality and technical end — everyone must work together to educate one another. In fact, Wertanzl swears by three components that he says are key to running a successful fleet: "With people, Through people, For people." According to Wertanzl it is the people — both customers and staff — from the vessel's master, to the wait staff in the ship's restaurant, who make the brand what it is. "The key to a successful fleet starts with customer satisfaction," Wertanzl said. "Just think of it as an upside down pyramid, except your guests are on the top, and executives are at the bottom. We're all working toward a common goal, which is a customer-oriented philosophy with one link that combines nine ships into an entire fleet." This "one ship concept" is the model for the rest of the Celebrity fleet. New technology and a high level of management, or the goals and values that are present on one Celebrity vessel — is the basis for an entire fleet.

More Than Just A Job For Wertanzl, his ties to the cruise industry are both professional and personal. It was through his love of travel, and through his interest in the glamour of classic ocean liners, he became enamored by the high seas.

"I was always fascinated by old ocean liners," Wertanzl said. "I always envisioned myself somewhere in the travel and hospitality industry" His inspiration was furthered by a quote, which he lives by that was once said by the German philosopher Goethe, "If you haven't traveled, you've only read one page in the book," he added. Little did he know that several years later, he would turn his passion into a building block towards his career in the cruise industry.

So Wertanzl, eager and ready to learn — entered hotel management school in his native Austria — subsequently landing his first job on the Vistajford as a dining room steward. Much of Wertanzl's business and management philosophies and styles were formed during his early days when he based his ambitions and work ethics on the advice and experience of his elders and contemporaries — a role, which he now has fallen into in his current position.

Prior to joining Celebrity this past May, Wertanzl, served as senior vice president of Hotel Operations at Crystal Cruises — a position that was as fresh as it was challenging. Wertanzl supervised the hotel end of this new line, which at that time consisted of two vessels — Crystal Harmony and Symphony. While Wertanzl is quick to mention that the time he spent at Crystal was one that was unique and special, he was ready to accept Celebrity challenge this past spring when he was tapped by the line to take on his current position, which requires him to meld his hospitality skills with his technical knowledge.

Wanting to "make a difference" and to give something back to the industry that has been so kind to him, Wertanzl, desires to make a difference. He wants to not only be the best at his profession, but wants his staff to follow in his footsteps. Therefore, he has taken on the role of not only manager, but also as an advisor, mentor and role model to newly-hired staff, who now wear the same set of shoes that he did coming out of hotel school. As an unofficial "spokesperson" for the cruise industry, Wertanzl stresses to his contemporaries that this is an industry that is a lifestyle — as well as a job.

Meaning that you must really love what you do and be driven — in order to succeed. This type of "passion" is reflexive of a trio of components that encompass Wertanzl's "Three Ship Segment" or simply stated: "Three S's - safety, service and style. According to Wertanzl, if these three items feed of each other, the rest will fall into place. "They (the 3 S's) all differ, but they all have to blend together," Wertanzl said.

While it's true that the technical engineers and officers onboard all Celebrity vessels must work to ensure that all classification and regulatory items are met for safe sailing, they also must understand the style and service end as well. As should someone such as a din- ing room steward be kept abreast of safety regulations onboard. "The principles of how the ship is managed are the same for everyone," Wertanzl said. Everyone works together to ensure that safety comes first." With leadership a constant theme throughout the operation of each vessel in the fleet, the 3 S's are used as a tool to mend any loopholes that may occur. "We're only as good as the weakest link in our chain," Wertanzl said. "Leadership has to be throughout the marine and hotel sides — with the 3 S's there's no hole there." Positivity Despite Tragedy When MR/EN spoke with Wertanzl via conference call from his office at Celebrity's Miami, Fla. headquarters, the nation was on the brink of the one-year anniversary marking the terrorist attacks on New York and Washington, D.C., which has had lingering effects on the economy and cruise segment. But according, to Wertanzl, the industry is coming back with a vengeance. "Obviously the whole industry has suffered from this tragedy," he said, "But it's (the industry) is coming back faster than we ever anticipated.

According to Wertanzl, in the days following the terrorist attacks, Celebrity staff — both shoreside and at sea — adopted a Strive = Thrive philosophy. Meaning that quick thinking and proper planning in response to this tragedy's immediate impact, positioned the company for a rapid bounce back as of today.

Since the Port of New York/New Jersey was forced to cease operations for several weeks following the terrorist attacks on New York City, Celebrity had to therefore reposition its Bermuda-bound Horizon and Zenith vessels to depart from the Port of Philadelphia — a move which despite the surrounding circumstances — proved beneficial for the company. The two vessels now operate permanent Bermuda cruises during the spring and summer months out of Philadelphia.

In addition, Celebrity also operates another vessel headed towards Bermuda — Galaxy — out of the Ports of Baltimore, Md. (April - November); and Charleston, S.C. (December - March) on alternating 10 and 11-night cruises While it may seem that the future of the cruise industry will come to a standstill (at last check there were no newbuilds scheduled beyond 2006), Wertanzl would disagree whole-heartedly - at least in terms of Celebrity's future. With the inauguration of four new vessels, which make up the Millennium Class, within the last two years, Wertanzl's strategic plan is to focus on maintaining a consistent profitability while continuing to employ and implement new technologies, such as Internet and e-mail access at sea.

But, while he wouldn't elaborate on what the future holds for the line, he did hint that this might just be the quiet before the storm for Celebrity. He didn't outline any big marketing or fleet expansion plans, or even go into detail of how the line would plan to expand, he just simply stated with the enthusiasm of a super hero: "Fasten your seatbelts — there's more to come." 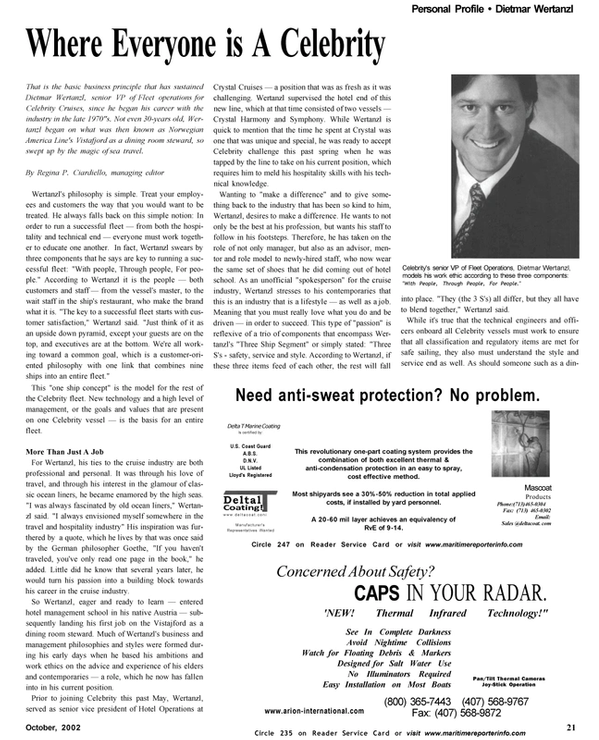 Read Where Everyone is A Celebrity in Pdf, Flash or Html5 edition of October 2002 Maritime Reporter