Financier Calls for a New Approach on Standards

Calls for a new Maritime Standards Board came from ship financier Paul Slater, speaking at the Maritime London event. Addressing the IMarEST and RINA debate on the single / double hull issue. Slater said that there is no standard established for the design, construction and operation of double-hulled tankers. "One cannot build a factory or an apartment building or a truck or even a container without meeting standards established by the government or local authority in which they are to be built or operated", he said. "It is the absence of enforceable standards in the shipping industry that is the root cause of many of its problems." A new Maritime Standards Board would gather all the necessary information, which already exists within classification societies, to establish new standards which would then be presented to the IMO for adoption by maritime governments, he suggested. Class would then be appointed by the new Board to make sure that shipowners and shipbuilders conformed to the standards during construction, and subsequently through the working life of a vessel.

Slater warned the gathering that moving from single to double hulled tankers without establishing proper standards for new designs may well be increasing the problems of pollution by creating greater safety risks in the future.

By establishing standards that would have the force of law. he said, the whole process of ship inspection becomes more straightforward. Class becomes an instrument of all maritime governments and applies a uniformity.

Other speakers had warned of the problems of corrosion in double hull spaces. These inaccessible areas, delegates were told, were ideal breeding grounds for fast-track corrosion, particularly aboard vessels where there was a large temperature difference between heated cargoes on board and sea water outside the hull. Such a temperature gradient would lead to substantial condensation, another corrosion catalyst.

Early double hull tanker designs were at significant risk, it was agreed. "The early generation of post OPA 90 tankers are now entering the second half of their useful lives". Slater said, noting that many of them are now owned by spot market traders whose operating budgets are more limited than the major owners or oil companies and whose vessels therefore face higher risk from corrosion or structural failure. Slater, who often draws parallels between shipping and aviation, asked delegates if they would even consider flying in an airplane for which no prototype had been built and tested. Shipping should follow aviation's model with maritime nations setting the standards by which all ships would be measured and port state control would then be better able to enforce the standards.

"Shipyard guarantees could then be demanded for longer periods than are available at present and the substandard operators would be more clearly identified," he said. 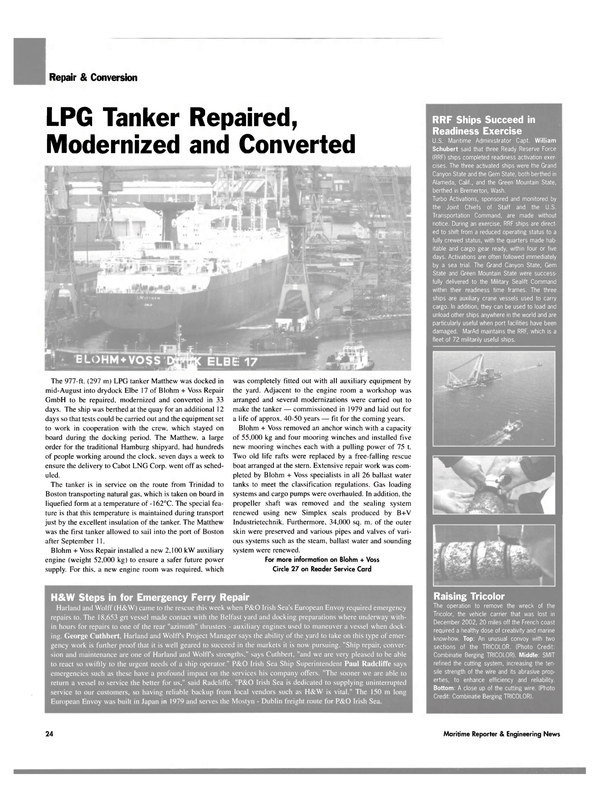 Read Financier Calls for a New Approach on Standards in Pdf, Flash or Html5 edition of October 2003 Maritime Reporter