It was in the tumultuous period when the tanker industry was still trying to adjust to OPA90, to the mandate for double hulls, to the uncertainties of COFRs and all the rest of the restrictions that were being placed on their operations.

It was also a time when there had been a casualty, with a small amount of pollution, involving a bulk carrier.

Of course the incident was portrayed by the media as another "tanker" casualty.

That owner was very, very frustrated.

His basic argument was that his dry bulk brethren just "didn't get it." That it was not just tanker operators who had been thrust into an entirely dif- ferent ballgame. It was the industry.

That legislators and the general public were not interested in whether one subset of the shipping industry was at fault.

In their eyes, it was the shipping industry that was at fault.

That, as a consequence, every time a bulk carrier was involved in a high profile casualty, the tanker sector would suffer.

His frustration was rooted in the apparent reluctance of the bulk sector to recognize this and to accept that this knock-on effect would ultimately include them.

It's only a matter of time, he warned, and they will have their own OPA90. Is there anyone here who would dispute the accuracy of his forecast?

These last 10 years have seen a steadily increasing raft of new regulations affecting the design, construction, operation and maintenance of bulk carriers, starting with the Enhanced Survey Program and culminating with the possible mandate for double sides.

And I think it is an odds on bet that the process is far from over even though there is clear statistical evidence that ESP is working and that bulk carrier losses are declining.

Are the changes warranted? It doesn't matter. The technicalities of double hulls for tankers were entirely irrelevant within the political context.

When there is a perceived need for action, no legislator worth his salt can resist the temptation to fill the void.

And so it is that the bulk carrier owner of the future will most probably be building double side skin vessels, like it or not. Will that double-sided bulker be safer than a robustly designed, well maintained, single skin ship?

No. But that is not the way the system works. And I think this is where many members of our industry still have not fully grasped the realities of the current situation.

The public face of this industry is the 27 year-old bulk carrier that is detained in a European port with 90 safety deficiencies as the owner tries to squeeze in one more voyage before the pending intermediate survey sends her to the scrap yard.

It is the older, poorly maintained bulk carrier that suffers side shell failure and sinks, taking her crew with her.

Let's be realistic about this.

Legislators will always seek to establish regulations that address the worst-case scenarios and those can usually be attributed to the small minority of owners who do not care about standards.

Yet the people who bear the principal costs of those actions are the responsible operators.

What I have not, and cannot understand is the reluctance of good owners to accept that, in the long run, it is cheaper and easier to support and adhere to the highest standards that make it difficult for the substandard operator to continue in business.

The surest way to guarantee continuing disruptive and costly regulation is to maintain the discredited and damaging lowest common denominator practices of the past.

Every member of the safety chain, including class, bears some responsibility for improving standards.

Yet, class, for example, continues to be pressured by shipyards seeking to cut their costs by optimizing the amount of steel that goes into a new bulk carrier.

It was only a couple of years ago that a leading shipyard took a proposed new design to each of the leading members of I ACS with the clear inference that the society that approved the design with the least steel would become the shipyard's preferred society for the planned series of ships.

By simply increasing the cost of the ship by a $1M if built to an alternative society's requirements, a yard is able to significantly influence an owner's selection.

It doesn't matter if the owner changes class on delivery; the inherent susceptibility of that design is already built-in to the ship. But the problems do not stop there. There are flag States that either do not care or who will, on occasion, attempt to pressure the class society on behalf of the owner.

Let me give you an example of another kind of pressure to which class is exposed.

Recently one of our surveyors con- ducted a rafting survey on the tank of an ABS classed ship.

He noted a section of the underdeck plating that appeared to be heavily corroded and asked the owner to stage the tank to allow a close up inspection.

The owner's response was to immediately transfer class on that ship, and on all the other ABS classed vessels in his fleet.

Adding insult to injury, the owner then invoiced ABS for the cup of coffee that had been provided to the surveyor.

I do not believe for a minute that any of the overwhelming majority of responsible members of this industry is comfortable with the situation. The Hong Kong Shipowners Association and MARTECMA, for example, have become prominent advocates of change — demanding robust bulk carriers that are fit for purpose. And it is there organizations, together with the very promising first steps taken by the Round Table members — Intercargo, ICS, Intertanko and Bimco — that give me hope that, finally, a willingness to change has begun to emerge.

Class wants and needs to be part of this change.

IACS has already announced that it is working hard to unify the Rules of all of its members for bulk carriers over 150m in length by January 2005. That should put an end to the manipulation of class loopholes by the shipyards.

Class has also got together with the Bahamas and Greece to develop pragmatic criteria that will meet the IMO's requirements for the establishment of "goal-based" standards for the design and construction of bulkers — and tankers — in the future.

You will already be familiar with the other initiatives that have been agreed or are under discussion.

The pending introduction of mandatory double sides. The requirement to raise bow height to give greater protection against green water.

The fitting of water ingress alarms.

The new notations for bulk carriers that will denote the density of cargoes they are permitted to load.

The question of hatch cover securing arrangements remains to be properly addressed. There are the new hold access requirements.

And then there are the ancillary issues such as ballast water exchange that will have a profound effect on the operation of some bulk carriers.

Many of you are probably grimacing at this litany of woes and mentally calculating how many hundreds of thousands, possibly millions of dollars they are all going to cost.

And you can be assured that we are in overdrive developing new programs and systems to help you deal with these various initiatives.

These are understandable, and necessary reactions. But I suggest we, as an industry, need to get over them very quickly.

I believe it is because the industry has a long history of fighting every proposed new regulation, tooth and nail and usually unsuccessfully, that we find ourselves in this mess today.

Perhaps I am an idealist. So be it.

But I refuse to believe that this industry cannot reclaim a measure of control over its own regulatory destiny.

And the key to achieving that is for the responsible members to move beyond the defensive strategies of the past that play to the lowest common denominator.

For self regulation to work the goal must be the establishment of the highest safety standards coupled with an intolerance of the substandard.

It requires those responsible members of this industry to recognize that it is in their long term financial interests to develop and introduce and support and adhere to those standards and see that they are applied equally and fairly to all.

You do not have to be a student of history to understand what will happen if we, as an industry, do not take this proactive, cooperative approach.

Just look at your own trade press of the last few years.

Take a look at the tanker industry.

They didn't think it could get much worse after OPA90.

But we all know differently.

And now we have ship's masters being thrown in jail.

We have hundreds of perfectly sound ships consigned to the beaches at Alang well before their normal scrap-by date.

We have new criminal penalties, and 200 mile exclusion zones being enforced by warships.

The shipping industry is firmly in the legislator's sights.

They do no differentiate between ship types. Even the Tricolor, the car carrying RoRo was recently referred to in the press as a tanker.

Fourteen years on and the log carrier New Clarissa is still being referred to as a tanker.

Oil on the beaches may stick to the feet but the ghosts of the 40 crewmembers on the Derbyshire have stuck in the collective memory.

There are more than 700 other seafarers' souls that have cried out to the IMO for assistance. And they have been heard. This issue is not going away.

Along with death and taxes, increased regulation of your activities is a certainty.

There is some sunshine in this gloomy future. You are not alone.

Every responsible member of this industry is on your side.

I can assure you that ABS is 100 percent behind any and every responsible, reasonable effort to improve safety, to protect life, property and the natural environment.

We support every effort that strengthens the self regulatory mechanism and creates a fairer marketplace that recognizes and rewards quality.

And we would welcome your support and encouragement in taking some of the tough decisions that will be necessary if real improvement is to be achieved and sanity restored. 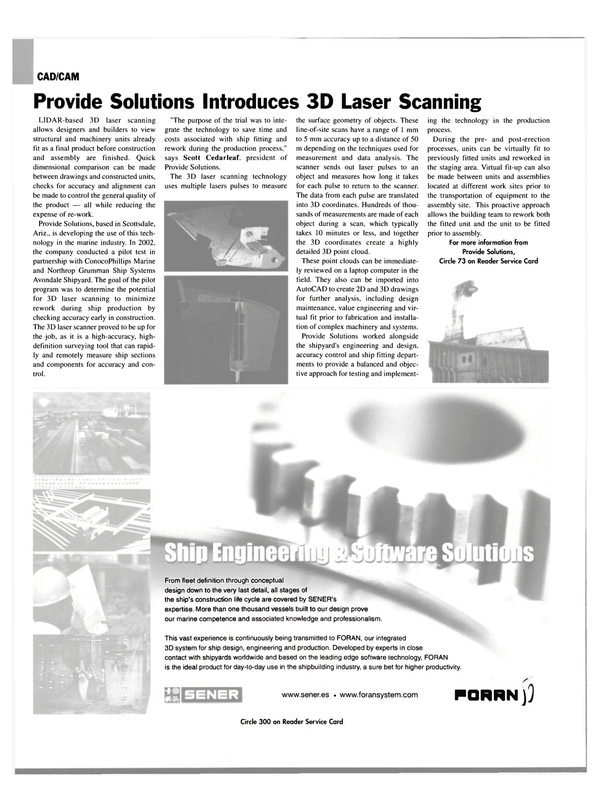