(MR&S), to anyone who has been involved with the marine industry since the mid-20th Century and one would think of the naval architecture and marine engineering firm that has held court from its homebase in New York City since just after the heydays of WWII. Its foundation, which was literally constructed by Mandell Rosenblatt and his son, Lester, has remained at the forefront of the industry and weathered the constant cyclical changes of an industry that is now often dominated by consolidation.

By Regina P. Ciardiello, managing editor It's a good thing that Mandell Rosenblatt lived near Brooklyn's Prospect Park. As a young man of about 14, the eldest Rosenblatt of this multigenerational firm, may not have formed his patriarchal role in establishing the naval architecture and marine engineering firm of M. Rosenblatt & Son. It was during those days that Mandell began to hone and develop his eye for vessels that were multi functional and in proper working order, yet aesthetically pleasing.

The year was 1907. and at the ripe age of just 16. Mandell literally made headlines when he entered a yacht design contest advertised in Motor Boat magazine on a whim — and won the grand prize — the magazine published his own concept for a "multi-functional vessel that was aesthetically pleasing." Something he had always dreamed of.

Mandell's winning concept debuted in the November 1907 issue of Motor Boat, with the headline, "A 36.5-Foot Speed Boat Designed by Mandell Rosenblatt of New York." According to his grandson, Bruce Rosenblatt, who occupies the same office that was once held by both of his forefathers, Mandell was a firm believer in the importance of aesthetics. "My grandfather's forte was as a naval architect of yachts," Bruce says. "He lived by the motto 'You can make something look good in addition to being technically correct.'" In keeping with the tradition that Mandell established as a foundation for the firm, the U.S. Naval Academy has kept his name and ethical sense of style alive with its Mandell Rosenblatt Prize that is given to graduating naval architecture students who have presented a class project that is technically correct, yet aesthetically pleasing.

"In terms of design, my grandfather was very seat of the pants," Bruce says, "Even though I was less than eight years old when he died, I remember being told that his quick estimates were very soon confirmed correct by the calculations." The self-taught Mandell Rosenblatt could sketch a vessel design from his mind, knowing all of the components of a vessel by using his basic common sense and experience. "He (Mandell) was a very 'practical' engineer," Bruce says. "He was the type of person that would — once knowing the principal characteristics of a vessel — could estimate, before doing the back up calculations, such important information as the size of the propeller, the shaft, the rudder stock, etc. "He saw aesthetics as 1A, it wasn't even number two." Association Leads to Foundation It was soon after the end of WWII, and because of discriminatory issues regarding their Jewish faith, both Mandell and his son, Lester, who by now had joined his father's vocation of ship design, were both out of a job. They turned to what has become their second family — The Society of Naval Architects and Marine Engineers (SNAME). It was at a New York section meeting of the trade organization where Mandell and Lester met a prior acquaintance, a man named Mr.

Blackstone, according to Bruce. "My grandfather said to Mr. Blackstone: 'What are you doing at the SNAME meeting?'" Bruce remembers. "And he (Blackstone) responded: 'I'm looking for a naval architect to design a ship that we want to have built.' Mandell responded quickly: "That's interesting; we're looking for someone that needs to have a ship designed." The meeting, which led to the company's first contract, was negotiated through Mr. Blackstone with a Newburgh, N.Y. shipyard. What came out of that yard was a 2,400-ton Portuguese fishing trawler known as Joao Martin that was built at the Hudson River yard and shipped off to Portugal.

"They (Mandell and Lester) formed the company on that job," Bruce says.

From Yachts to Commercial Design Relying more so on yacht design than commercial and military design, which has been the company's staple for the last several decades, Mandell and Lester took on a project of their own in 1958 when they designed the family's sailboat, the Rosa II, which is famous in the marine and sailing circles for its stylish lines. When MR/EN met with Bruce recently at M.Rosenblatt & Son's New York City offices, a large framed copy of Mandell's original lines drawing of the Rosa II still hangs in the office that was once occupied by each of her codesigners.

"To me (the lines drawing) of our sailboat, the Rosa II, is the greatest piece of artwork," Bruce says. The drawing three dimensionally describes the 41-ft. sailboat's hull. Since it was before the advent of CAD software, Mandell drew the vessel's hull entirely by hand.

He also speaks of a running family joke that had to do with refuse hauling "garbage" barges on the East River.

While the company has made significant design contributions to more famous designs, such as the Spruance (DD-963) class destroyers and Unrep (Underway Replenishment) Systems for the U.S Navy, and the primary pilot boat for New York harbor, the firm also designed every New York City garbage barge that has been Boating since the 1950's. "I remember being a boy of about sevenyears- old," Bruce recalls. "We were out on the Rosa II and my siblings and I complained of the stench (of garbage) that permeated as some fully loaded barges went by. Well my father, turned to my mother and simply said: 'It may stink to them, but it's bread and butter to us.'" Bruce has that memory and many others of his father, Lester Rosenblatt, who was an industry icon. Following in his father's footsteps, Lester grabbed hold of an industry that would become his extended family. While his father before him was involved with SNAME, Lester went on to become president of the Society — a position, which his son Bruce has held for the last year.

It was Lester's unending drive that led the firm to boast at times more than 1,000 employees in 10 offices performing designs on the L.Y. Spear Class of submarine tenders, Spruance Class destroyers and T-AGS 39 Class Oceanographic Survey Ships, to name a few.

Even though his company was sold in April 2000 to AMSEC LLC, operating as a "Group" to the company jointly owned by SAIC and Northrop Grumman Newport News, Lester continued to remain at the forefront of the industry that granted him his livelihood. Sadly, however, his life ended on the morning of June 15, 2003 when he passed away at the age of 83, at his home in New York City, — leaving his son Bruce to carry on the family name and the SNAME tradition.

"My father used to joke that I was almost named Bruce "Halibut" Rosenblatt," he says. "The day I was born, my grandfather was at the Mare Island Naval Shipyard at the launching of the submarine Halibut when he received a telegram from my father stating that he had a new grandson.

He sent the telegram back saying: 'Another naval architect in the family.'" 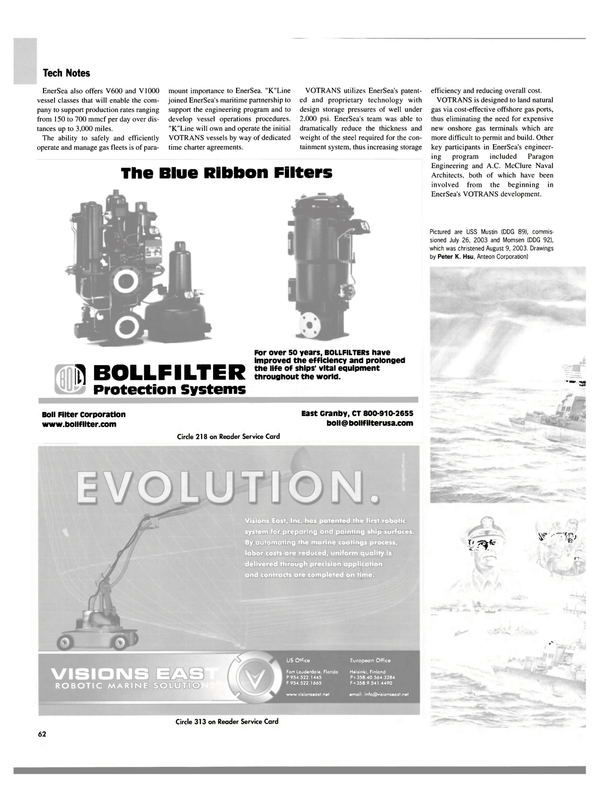