This classic military strategy has been used as a primary approach for defending a valuable target, infrastructure or piece of property for centuries.

Medieval rulers had wide moats and drawbridges surrounding their castles, followed by high walls and armies ready with flaming arrows or large caldrons of hot metal ready to dump on the attacking force to slow their advances.

Modern day security barriers are now a fixture at every U.S. embassy around the world. The idea of a layered defense has been a primary tactic that have served military commanders well.

The layered defense strategy is also a cornerstone of security in the maritime arena, especially in the United States following the cowardly attack on the USS COLE. Critics and advocates alike agree that there have been tremendous advances in maritime security over the past two years throughout the United States, its' Commonwealths and Territories. Several steps have contributed to this advance, however, one specific action stands out, the implementation of the Maritime Transportation Security Act or 2002 (MTSA). Signed into law by President Bush on November 25, 2002, the MTSA represents one of the most comprehensive and important steps forward in meeting the President's and the Department of Homeland Security's layered security plan for our ports and waterways.

Since the tragic events of September 11, 2001 the Coast Guard has led a coalition of government agencies, maritime industries and the boating public in an ongoing effort to strengthen the security of the maritime transportation system. The eyes and ears of maritime law enforcement have been given a tremendous boost as legitimate maritime users from recreational sailors off of Martha's Vineyard, to fishermen near the Golden Gate Bridge to the crew of a dive boat off the Florida Keys report unusual activities. Maritime industries have voluntarily reinforced their security operations to prevent terrorist attacks.

Federal, state and local law enforcement agencies have reenergized their focus on maritime security by increasing their presence on the water and along the waterfront. While all of these efforts have improved maritime security, they lacked a formal framework to ensure coordination and a proper distribution of responsibility and accountability. The MTSA provides this formal framework.

In regards to port and waterway security.

the MTSA contains four "major" components of interest. These are: the requirement to complete port, vessel and facility vulnerability assessments, the submission and approval of security plans for facilities and vessels that may be involved in a transportation security incident (an incident resulting in significant loss of life, economic loss or environmental damage), the establishment of Area Maritime Security Committees, and the development of Area Security Plans. Collectively, these components of the MTSA establish a layered security strategy that significantly strengthens and standardizes the security measures for the domestic port security team of federal, state, local and private authorities.

environmental, etc.) associated with a terrorist attack, as well as the probability of success of such an attack based on the existing physical security measures.

The first layer of security in the port rests with the owners and operators of waterfront facilities and vessels: they have primary responsibility for the security of their property. Once the facility and vessel vulnerability assessments are complete, the MTSA requires that the owners/operators develop and implement security plans to address how they will reduce their vulnerabilities to an acceptable level. These facility and vessel assessments and security plans had to be submitted to the Coast Guard by December 31. 2003 for approval and implementation by July 1, 2004.

This is a huge undertaking affecting an estimated 3,200 waterfront facilities and about 8,500 vessels nationwide. This requirement includes passenger vessels, container ships and vessels or facilities that carrying or handle hazardous materials.

Additional security requirements include everything from passenger, vehicle and baggage screening procedures to security patrols, personnel identification and even the installation of surveillance equipment.

For security reasons, the Coast Guard is not providing the names of facilities and vessels required to submit plans or who have failed to submit a vulnerability assessment or security plan.

However, compliance has been excellent, as of February 2 over 90 percent of the required plans have been received.

California must approve the plans by July 1, 2004 to meet ISPS Code requirements.

The MTSA also requires that each plan be exercised annually.

One other part of the MTSA that has received some notice in newspapers throughout the country in the last week is the requirement for an Automatic Identification System (AIS) to be carried by all ships engaged in international voyage. This system, in theory, is designed along the lines of the Air Traffic Control System. AIS will send detailed ship information to other ships and shore-based agencies providing virtual tracking and overall monitoring.

For example, once the AIS is fully operational.

the Coast Guard will be able to identify all vessels approaching any given port well before they are in sight of the sea buoy. AIS will be part of a third security layer as we "push our borders out" to identify maritime threats as far from our shores as possible. Another component of this third layer will be increased security in foreign ports and on foreign vessels as they too come into compliance with the ISPS Code.

While we have already realized significant advances in maritime security over the last two years, successful implementation of the MTSA will significantly strengthen and standardize maritime security for all domestic ports and those within our territories and commonwealths.

While teamwork amongst maritime stakeholders remains the key to securing our ports, the Coast Guard intends to aggressively enforce the requirements of the MTSA as its overall enactment, slated for a statutory deadline of July 1, 2004. will be another step forward in a very difficult challenge... 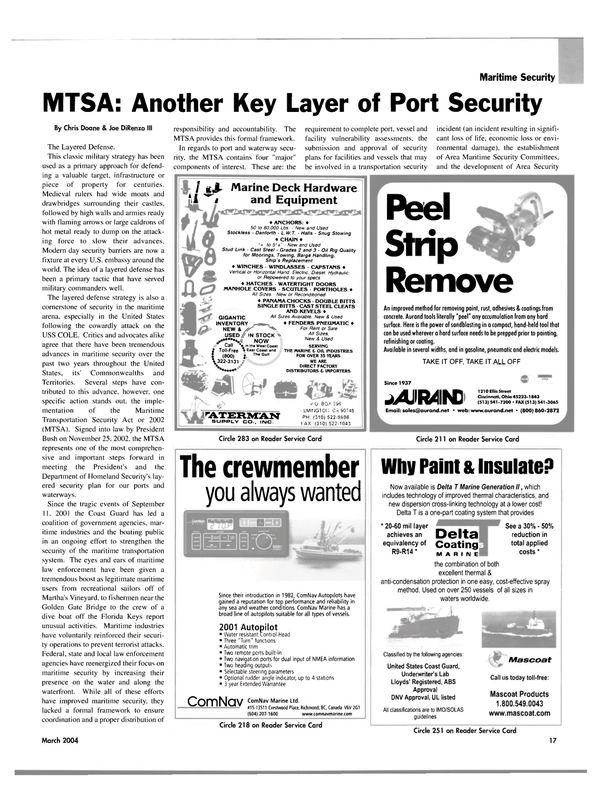