Vietnam's fledgling shipbuilding industry has raised its international profile by entering into a seminal agreement with the UK's Graig Group for the construction of a series of double-hulled bulk carriers. Cardiff-based Graig's bold move, potentially entailing 15 vessels of the Diamond 53 handymax type, draws on its experience in assigning a similarly extensive program, for 14 examples of the 53,000-dwt design, to Chinese yards. For the industrially-ambitious Vietnamese, who have already made substantial investments in modern shipbuilding equipment and practises, the Graig deal has particular appeal not only for its promise of serial production of one of the most well-considered, futureoriented bulker designs, but also for the broader package which the f i rm brings to the project.

Having been conceived at a time of heated discussion within the marine industries as to the merits and demerits of double-skin bulkers. the Diamond 53 was the first issue of the joint venture f i rm set up in Shanghai by Graig and Carl Bro, a Danish specialist in naval architecture, marine engineering and project planning. Graig's operating know-how with dry cargo tonnage, arising from both shipmanagement and shipowning activities, helped shape the new breed, while Det Norske Veritas had a direct input on structural and regulatory issues. Most of the bulker newbuilds entrusted to China have been purchased by shipowning companies other than deal-maker Graig. As one of the first marine groups f r om outside China to realize the potential of the Chinese yards, it has to date been contracted to supervise nearly 50 newbuilds there, of various types, on behalf of owners worldwide as well as for its own shipping interests. Unquestionably, the decision to take the original Diamond 53 program to China, coupled with a pragmatic design approach and Graig's development of a financial package, had brought double-hull construction within the bounds of commercial possibility.

An extra cost premium would have been entailed, at that time, in having such ships built in Japan. Keen price is. of course, fundamental to viability and to ordering decisions in the intensely competitive bulk shipping sector. Graig is looking to repeat the formula in Vietnam, leveraging the reputation gained in China. In addition to the attractive delivery positions conferred by the commitment with Vietnamese state shipbuilder Vietnam Ship Industry Corporation (Vinashin). the agreement offers broader longer-term benefits to all parties. "We can help the Vietnamese yards with the design, with procurement.

with finance and with all-important quality control." said Graig chief executive officer Hugh Williams. "Our experience of working with yards in China to build series of ships means we can help the yards to develop, and give confidence to our partners that Vietnam can provide them with high quality tonnage." he added. Graig intends to open an o f f i c e in Vietnam to serve the project.

The geared, wide-hatched bulkers, it is claimed, will be the largest and most s o p h i s t i c a t e d vessels yet built in Vietnam. The first of the firmly-booked quintet is due to be handed over in January 2006, and construction of the series has been assigned to the Halong yard in Quang Ninh province, and to Namtrieu Shipbuilding Industry Company in Haiphong. In the meantime, the first of the Diamond 53s f r om China is scheduled to be commissioned into service this year. 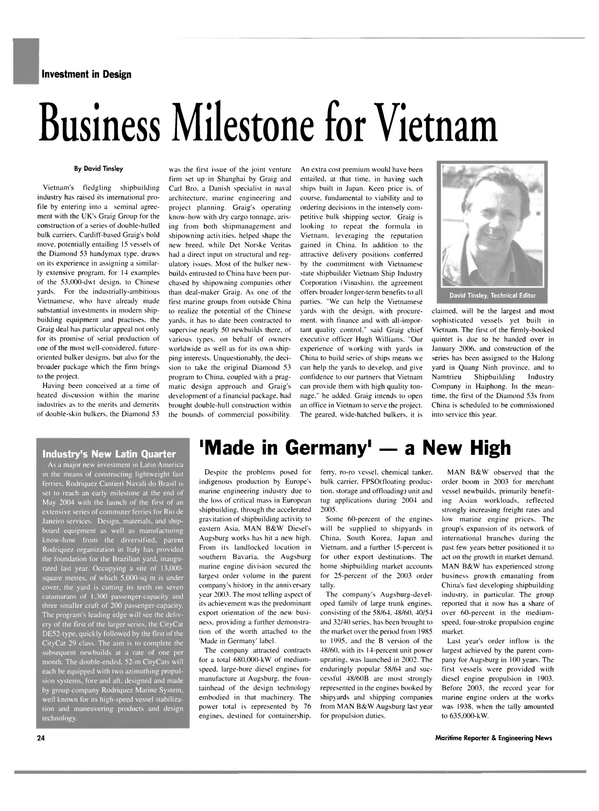