When Security is Made Simple

How are we to implement an effective Maritime Security Program?

When terrorists hijacked aircraft and used them as weapons, a significant paradigm shift occurred in how we view security in the U.S. The Department of Homeland Security (DHS) was created and we were witnesses to the largest shift in federal government roles and responsibilities since World War 11.

Additionally, significant changes were made to the airline and maritime industries with the implementation of the Maritime Transportation Security Act of 2002 (MTSA) and its aviation counterpart.

This article will discuss methodologies to assist maritime owners/operators in complying with the often confusing myriad of federal and international laws and regulations.

According to the U.S. Coast Guard, approximately six million loaded containers arrive into the United States from overseas, and nearly one billion tons of petroleum passes through U.S. ports.

Among the major threats to be evaluated in risk management and analysis relating to the maritime industry include: • The covert shipment of personnel, arms, or a variety of weapons: • The possibility of a small explosiveladen waterborne vessel approaching a large vessel or port facility similar to the USS Cole incident that occurred in Yemen: • The taking of a vessel by terrorist crewmembers who could use the vessel as a weapon: • Major disruptions to port operations, military shipments and international trade through destruction of key assets such as container cranes and pier facilities or blockage of key facilities.

President Bush has stated in the National Strategy for Homeland Security that. "Securing the American Homeland is a challenge of monumental scale and complexity. But the U.S. has no more important mission." Since 9/11, we have evolved from a somewhat passive, reactive security posture to a very aggressive, proactive approach. The airline industry has initiated a number of directives including the implementation of the Federal Air Marshal Program. Flight deck doors are now required to be hardened, and all luggage is passed through screening devices. The maritime security industry has also been witness to the development of new and/or modified international and federal mandates. New requirements were detailed in MTSA.

amendments to the International Convention for the Safety of Life at Sea (SOLAS), and the adoption of the ISPS Code (International Ship and Port Facility Security Code). Specific mandates require maritime owners and operators to be in compliance with the following mandates or be fined $25,000 per violation for failure to comply with MTSA mandates: • Vessel and Port Security Assessment by July 1, 2004 • Vessel and Port Security Plan by July 1,2004 • Designation of a Company Security Officer (CSO) by July 1, 2004 • Designation of a Vessel Security Officer (VSO) by July 1, 2004 • Designation of a Facility Security Officer (FSO) by July 1,2004 A recent survey of a major U.S. port facility has shown that approximately 70 to 80 percent of maritime owners and operators are not yet in compliance with the mandates. The most likely reason for this seems to be due to the fact that these new regulations are a source of confusion and frustration to many.

What can maritime owners and operators do to be in compliance with the seeming myriad of regulations? More importantly, what can they do to prevent their personnel and facilities from becoming a victim of criminal or terrorist activity?

1. Be proactive! Owners and operators need to develop a proactive security posture and develop this type of mindset in every member of the organization.

2. Seek the services of an outsidesourced security consultant and request a security assessment. A consultant from outside of your organization can serve as an "agent for change". The security consultant hired to perform the assessment should have a solid working knowledge of the maritime industry as well as a strong foundation in all aspects of security.

3. Maritime owners and operators should modify their current security plan or implement a new security plan based on the results of the security assessment. New systems should be rehearsed and tested periodically to ensure their effectiveness. 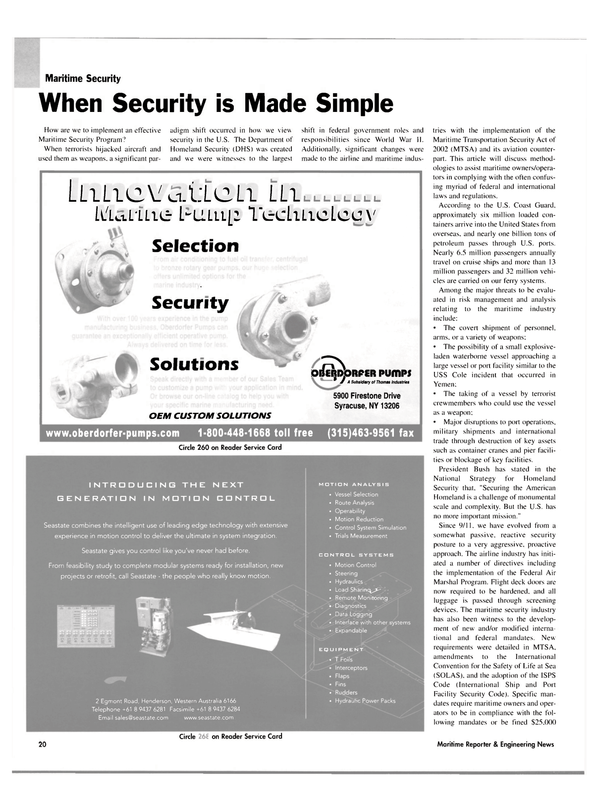 Read When Security is Made Simple in Pdf, Flash or Html5 edition of March 2004 Maritime Reporter