Manuel Grimaldi confided to some close friends last December that not only had he decided to set up a new line from Italy to Spain but also to purchase Superfast 1 now called Eurostar Roma for about S49.3 million. The specification of the vessel will mean a greater presence in Mediterranean RoRo and in fact there are now three of this type of vessel under the name of Grimaldi Ferry Prestige. The new purchase Eurostar Roma (pictured opposite page) was presented by the Naples shipping group in Rome on January 23. 2004. The vessel is 24.000 tons. 570.8 ft. (174 m) long, with a beam of 78.7 ft. (24 m) and a cruising speed of 27 knots. Eurostar Rome can carry 1,400 passengers with 100 cars as well as 110 trailers. The ship will carry out a thrice weekly service between Civitavecchia and Barcelona. Sailing time for Barcelona is 18 hours and nine hours for Golfo Aranci. The name of the new Grimaldi-Naples vessel was chosen because of Civitavecchia's identification as the port of Rome. Grimaldi-Naples Group, headed by Guido Grimaldi. is a leader in the transport of cars and wheeled vehicles and owns one of the largest multi purpose and car carrier RoRo fleets in the world with 50 vessels.

of which 31 are newbuilds. including five under construction. The Naples group operates shipping lines to over 100 ports in 40 countries in the Mediterranean, Northern Europe, Scandinavia, British Isles, West Africa and North and South America. Since 1997 the company has spent approximately $1.3 billion modernizing the fleet, and its number of employees has risen from 1,000 to 3,100.

Three Newbuilds for Grimaldi The car carrier Grande Lagos, the seventh of a 10-vessel order, was launched on February 22 at the Croatian yard Uljanik at Pola for Italy's Grimaldi- Naples. Grande Lagos, which will be delivered in May, is a 44,500 ton 650-ft.

The ship of 56.000 tons is 702 ft. (214 m) long with a beam of 105 ft. (32 in). It can carry 2,500 cars as well as 2,500 lane m and space for 850 teu. Grande Buenos Aires joins nine other Grande class vessels already in service on Grimaldi-Naples' established lines Northern/Europe/West Africa and Northern Europe/South America. Grimaldi Prestige Ferries the Group's new passenger and car trade name will inaugurate a new fast service from Civitavecchia to Barcelona three times a week and Civitavecchia to Golfo Aranci once a week with the ultra new RoPax Eurostar Roma a 24.000 ton ferry of 571 ft. (174 m) and a cruising speed of 27 knots able to carry 1,400 passengers, 100 cars and 110 trailers. 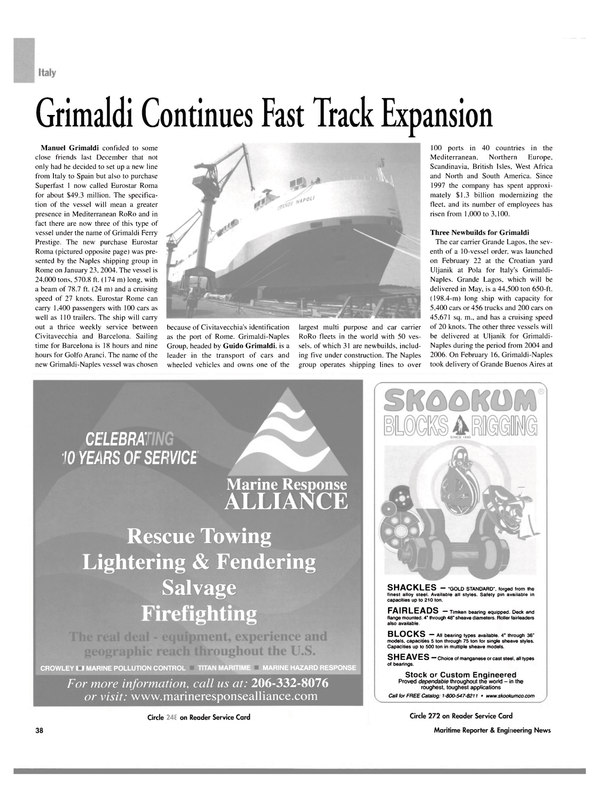