For anyone who has ever had the privilege to attend such a delivery, seeing a new cruise ship rolled out in the middle of the Finnish winter is truly an aweinspiring, if not one of the most ironic, sights. However, it is a testament to accrued cruise industry expertise and a stable infrastructure of equipment and system suppliers that keeps the shipyard at the forefront.

Carnival Miracle is the sixth cruise ship in the Spirit class series of new Panamax-size cruise ships for Carnival Cruise Lines (four ships) and Costa Crociere (two ships). The first ship in the series, Costa Atlantica, was deliv- ered in year 2000. Carnival Spirit and Carnival Pride were delivered in 2001, Carnival Legend in 2002 and Costa Mediterranea followed in 2003.

Carnival Miracle was officially named February 27, 2004, by former Army private Jessica Lynch, after which is was schedule to depart on its inaugural threeday voyage from Jacksonville.

"Not only is the Carnival Miracle a spectacular 'Fun Ship' with all the features and facilities desired by today's discriminating vacationers, it also will operate a truly innovative inaugural schedule with departures from four convenient U.S. homeports, including our first-ever voyages from Jacksonville," said Bob Dickinson. Carnival president and CEO.

Following the trend towards more rooms with outside views, 80 percent of Miracle's 1,062 staterooms offer an ocean view, with 80 percent of those featuring private balconies. All the prefabricated staterooms have been manufactured by Piikkio Works Oy.

In designing a more narrow superstructure, one more deck with passenger staterooms could be added. In the superstructure most of the staterooms face the sea, and the technical spaces, including the air conditioning machinery, are placed in the center of the ship, behind the passenger corridors.

The ship was floated out from the cov - ered newbuilding dock in June 2003 and the successful sea trials took place in November. At the completion party held onboard Carnival Miracle at the Helsinki yard already on January 17.

Micky Arison. Chairman and CEO of Carnival Corporation noted that the ship was completed three weeks before the date agreed on. "You have done a fantastic job." he said.

Miracle features 12 passenger decks plus four decks below for machinery and crew spaces.

The central idea of "Famous Fictional Icons" has inspired Joe Farcus, Carnival's ship architect, in the design of the public rooms aboard Carnival Miracle. The dramatic interiors exist in the architecture and decor throughout Carnival Miracle.

High technology design and construction Carnival Miracle has a diesel-electric machinery, consisting of six Wartsila 9L46D diesel engines, with a total power of 62,370 kW. each connected to an alternator producing electricity to the ship's main electric network. The propulsion consists of two azimuthing electric Azipod propulsion units, with a power of 17.6 MW each. Carnival Miracle has three 1.91 MW tunnel thrusters in the bow. The service speed is 22 knots. 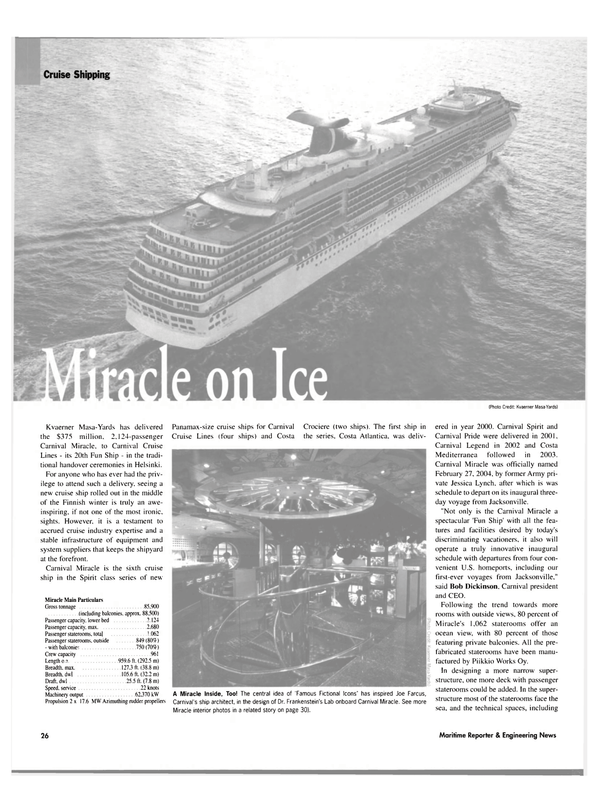