Due to a number of severe accidents involving RoRo ferries in recent years, there is an increased interest in modeling continuous flooding within marine vessels. For many years, safety regulations have been prescriptive rather than being based upon individual vessels.

This is changing. Within procedures laid down by the IMO. there is an option for vessels to comply with regulations using numerical simulation. It is generally considered that numerical simulation will become the predominant method for the verification of ship safety.

Tribon M3 contains an application for Continuous Flooding Simulation for modeling progressive flooding within a vessel. It is based on the numerical simulation of the physical properties of fluids and the geometry of the individual vessel rather than a prescriptive approach. Fundamentally, it models two interconnected issues: the distribution of fluid within the compartments of the vessel and the attitude of the vessel to the water as time evolves.

To enable simulation to be carried out.

Once modeled, it is very simple to alter any opening or any initial distribution of fluid in a vessel to simulate a range of scenarios. This facilitates the assessment of the severity of damage and the effectiveness of any counter measures taken to prevent sinking.

Counter measures may consist of closing off certain openings or pumping water into or out of certain compartments in an attempt to balance the vessel.

For this reason, water pumps are a feature of the modeling approach. This means that the simulation is useful for both design and operational training.

The software application has been written to make it easy to alter or refine the equations that model flow between compartments. For example, it is a straightforward matter to add the ability to model pumping into and out of compartments and cross flooding through pipes. As the illustration shows, mathematical modeling has already produced a sophisticated functionality, particularly in the progression of water through the vessel. Furthermore, a number of research organisations, such as the Ship Stability Research Centre (SSRC) at Strathclyde University, are investigating sophisticated methods for modeling the ship dynamics. 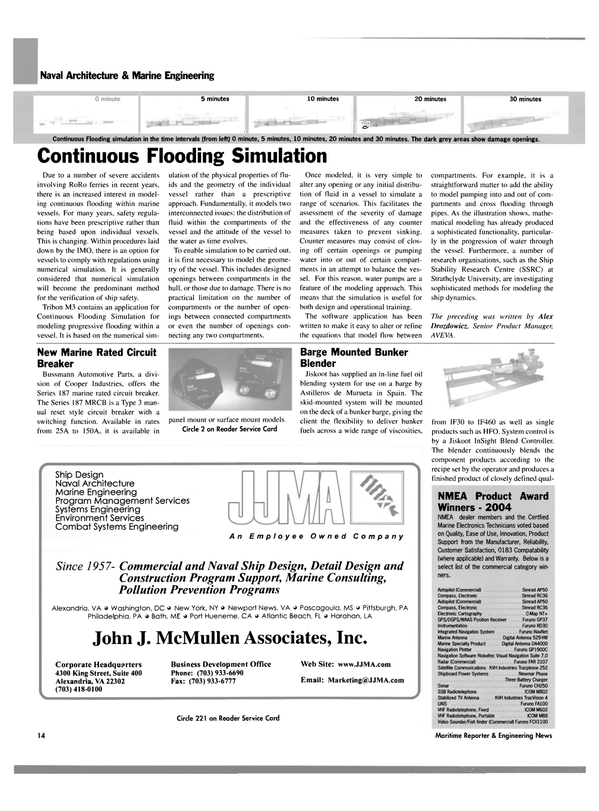