Heavy lift specialist Jumbo enters its heavy lift vessel MV "Jumbo Javelin" newbuild into service this week after having been mated with cranes successfully and passing final sea trials in the North Sea. With its 1,600 tons lift capacity, a hold space of 19,000 cu. m.

and a main deck of 2,650 sq. m., MV Jumbo Javelin is without contest the largest heavy lift ship in its class in the world. She is the first in a series of two new ships ordered by Jumbo. MV "Jumbo Javelin" will be joined by its twin sister vessel MV Fairpartner in September. The ships will boost the Jumbo fleet to a total of 12 units. On its commercial maiden voyage Jumbo Javelin will load a combination of power plant material and petrochemical equipment from Dutch and Italian ports for destinations in Bahrain, Qatar and Iran. The heaviest cargo item is a reactor column - weighing 620 tons weight and measuring 61.06 x 9.736 x 9.878 m - destined for the styrene monomer plant of the ninth olefin project in Bandar Assaluyeh, Iran. 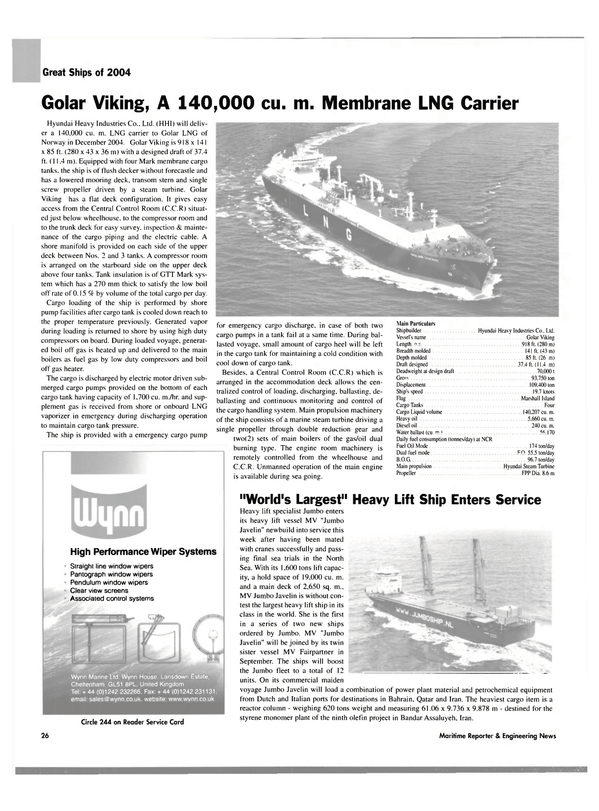