As this article is being written, the chief executive officer of an American ocean carrier is on trial for alleged participation in the discharge of contaminated wheat into waters of the South China Sea. The charges were brought under the somewhat obscure U.S. Ocean Dumping Act.

In 1999, a U.S. flag ship owned and operated by the company was carrying U.S. wheat to Bangladesh. Due to a leak in a fuel tank, some of the wheat became contaminated and was rejected upon arrival. Some Bulgarian workers were brought on board the ship in Singapore and discharged the wheat overboard en route to the United States. The company and the company's former president have already pled guilty to the offence.

The London Dumping Convention and the U.S. Ocean Dumping Act both have as a primary goal the prevention of pollution of the sea by dumping of waste and other matter that is liable to create hazards to human health, to harm living resources and marine life, to damage amenities, or to interfere with other legitimate uses of the sea. The London Dumping Convention specifically provides that dumping does not include, among other things, "the disposal at sea of wastes or other matter incidental to.

or derived from the normal operations of vessels." The U.S. Ocean Dumping Act adopts a narrower view with regard to exemptions, excluding from the definition of dumping only "a routine discharge of effluent incidental to the propulsion of, or operation of motordriven equipment on, vessels." In practical terms, the London Dumping Convention incorporates and is consistent with the garbage disposal provisions found in Annex V of the International Convention for the Prevention of Pollution from Ships (MARPOL Convention). The U.S.

Ocean Dumping Act, in some respects, is not consistent with Annex V of the MARPOL Convention.

Annex V of the MARPOL Convention provides that disposal into the sea of garbage shall be made as far as practicable from the nearest land, but disposal is prohibited if the distance to the nearest land is less than 25 nautical miles in the case of floating garbage such as dunnage or less than 12 nautical miles in the case of food wastes and garbage that normally sinks. Garbage is defined as all kinds of victual, domestic, and operational waste generated during the normal operation of the ship and liable to be disposed of continuously or periodically.

Guidelines for the implementation of Annex V were promulgated by the International Maritime Organization (IMO) to provide governments and vessel operators with additional detail regarding the goals of this annex. The Guidelines define cargo residues as "the remnants of any cargo material on board that cannot be placed in proper cargo holds (loading excess and spillage) or which remain in cargo holds and elsewhere after unloading procedures are completed (unloading residual and spillage)." The Guidelines go on to define operational wastes as including cargo-associated waste, maintenance waste, and cargo residues. Among other things, the Guidelines provide that cargo residues are to be treated as garbage under Annex V except when those residues include material defined or listed under other annexes of the MARPOL Convention, as when the residues contain oil or noxious liquid substances.

Cargo residues of all other substances (other than those containing material defined or listed under other annexes) and not prohibited from disposal at sea as garbage (such as plastic) are not explicitly excluded from disposal as garbage under the overall definition of garbage in Annex V.

Garbage is defined by the regulations as "all kinds of victual, domestic, and operational waste, excluding fresh fish and parts thereof, generated during the normal operation of the ship and liable to be disposed of continuously or periodically, except dishwater, graywater, and those substances that are defined or listed in other Annexes to MARPOL 73/78." The regulations go on to provide that garbage may not be discharged from a ship located outside the navigable waters of the United States and outside a special area if the distance to the nearest land is less than 25 nautical miles for dunnage and related floating garbage or less than 12 nautical miles for victual waste and other garbage likely to sink.

Thus, the USCG regulations are consistent with the MARPOL Convention and the London Dumping Convention insofar as the disposal of garbage is concerned.

The U.S. Ocean Dumping Act prohibits almost all discharges from ships at sea, whereas the London Dumping Convention, the MARPOL Convention, and the USCG regulations prohibit dis discharges of garbage (other than those containing plastic, oil, liquid noxious substances, or other listed material) only in designated special areas or when the ship is within a certain distance of land.

The U.S. Ocean Dumping Act applies to U.S. flag ships worldwide and, with one caveat, to non-U.S. ships operating in U.S. waters.

'Ocean waters' means those waters seaward of the baseline from which the territorial sea is measured. 'Dumping' means a disposition of material.

Research has revealed three prior prosecutions for alleged violations of the Ocean Dumping Act. The first, in 1988, ended in an acquittal on the dumping allegations, but convictions with regard to other environmental crimes.

In 1993, two executives were sentenced to confinement and criminal fines in a case involving the illegal dumping of a cargo of incinerator ash from the M/V Khian Sea. Incinerator ash from Philadelphia was loaded on the vessel in 1986 under a contract that called for legal disposal in another country.

The vessel owner attempted to unload the ash in various countries, including the Bahamas, Honduras, Haiti, and Guinea Bissau, but when word was publicized that the ash was potentially toxic, no country would accept the cargo. The vessel returned to Delaware Bay in May 1988. It soon departed, calling in Yugoslavia (where its name was changed) and Singapore.

When it arrived in Singapore in November 1988, its holds were empty.

At trial, the master testified that the two executives ordered him to dump the incinerator ash as the vessel was transiting the Atlantic and Indian Oceans. The two executives were convicted of illegal dumping and of lying to the grand jury.

A ship owner and a former port captain were sentenced to a criminal fine of $250,000 and confinement for six months, respectively, in May 1998, for dumping drums of oil residue and cleaning wastes into the Pacific Ocean.

Trinidad Corporation, a subsidiary of Apex Oil Corporation, and the company's former port captain in Portland, Oregon, pleaded guilty to violating the Ocean Dumping Act. The charges arose from the dumping of approximately 365 drums of oil residue and cleaning wastes (muck) from the vessel Admiralty Bay in September 1990 and September 1992.

The wastes were stored in 55-gallon drums on the vessel's deck and were dumped into international waters after the ship left port. While dumping of the ship-generated waste may have been permissible under the MARPOL Convention under certain conditions if discharged as generated, storing the waste in drums for a large-scale dumping is not authorized by MARPOL.

The three prior prosecutions and the ongoing one should send a clear signal to ship owners and operators that they must heed the U.S. Ocean Dumping Act and its strictures. The U.S. Government and the EPA have long arms that can, in appropriate cases, reach halfway around the world. It is a violation of the U.S.

Ocean Dumping Act for a U.S. ship to dump material into the ocean anywhere in the world. It is a violation of the U.S.

Ocean Dumping Act for a non-U.S. ship to dump material into the ocean anywhere in the world if that material was generated or loaded on the ship while in the United States. It is thus recommended that ships dispose of their garbage (including dunnage generated by discharging cargo in a U.S. port) ashore prior to departure from the United States. 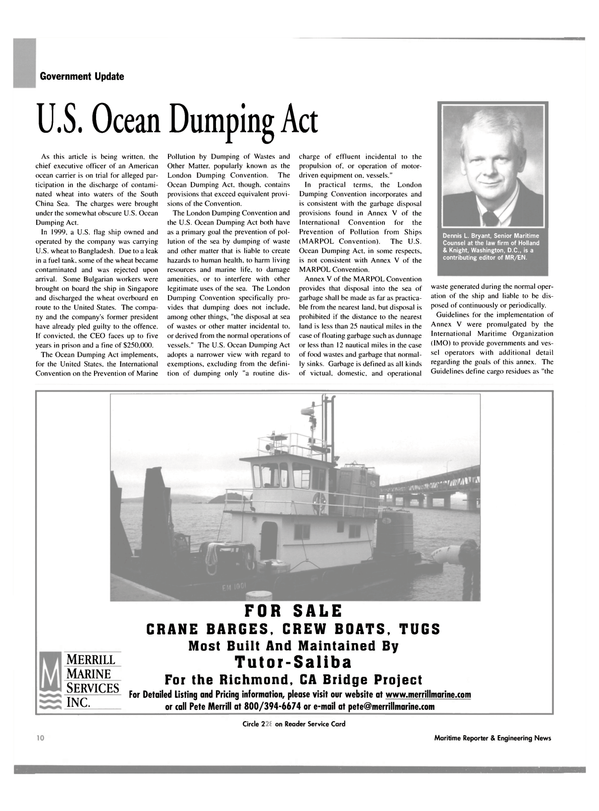