Fire onboard a boat or ship is generally considered the most dangerous situation on the water. While advances in technology have helped to mitigate risk, consistently investing to upgrade a crew’s firefighting training, skills and equipment is the best means to keep crew, ship and cargo safe if disaster strikes.

While innovative new fire-resistant materials and advanced fire suppression equipment onboard ships and boats has helped to improve fire security, technology alone is not a one-stop security blanket in the quest to keep crew and ship free from harm in the case of a fire.
“Ship operators are once again placing a huge importance on fire fighting training, an over-reliance on fixed suppression systems can be dangerous and create a sense of false security,” said Capt. Ted Morley, Master Unlimited, AFNI, Chief Operations Officer, Maritime Professional Training (MPT). “Having well trained first responders is vital as they can be pro-active and adaptable to each emergency.”
Firefighting training is a particular point of emphasis at MPT, and the school has invested regularly and often to ensure that it has the tools and teaches the technique that are necessary to keep modern vessels in ship shape. MPT established the Marine Tech Fire Academy and uses that facility to run more than 60 Fire Fighting classes a year, including STCW Basic Fire, Advanced Fire, Refresher and Renewal for both, specialized courses for clients and 1405 for Land Based Fire Fighters. “We also spend more than 30 weeks a year onboard our clients vessels training while they are underway,” said Capt. Morley. “MPT is also involved in writing onboard and company fire fighting procedures and doctrine, as well as shoreside resource response guidelines. That translates to almost 100 fire fighting courses a year.”

Firefighting Technology
While technique and training is the foundation for any solid onboard emergency response, technology both in fire-resistant materials found on modern ships as well as the firefighting apparatus itself continues to grow in sophistication and performance yearly.
“Throughout my career, from fighting marina and boat fires while in charge of a Coast Guard response boat in the mid-1980s to routinely managing commercial vessel firefighting operations today, I have attended a number of firefighting courses over the years; tactical training has evolved based on lessons learned from actual fighting shipboard fires,” said Jim Elliott, Vice President, T&T Salvage. “Technology – such as infrared, advances in firefighting systems, and improved firefighting extinguishing agents – have enhanced shipboard firefighting operations further. Advances in personal protective equipment and breathing apparatus/cylinder capacity have also gone a long way in improving safety.” T&T Salvage’s investment in technology includes the latest in infrared technology: “We even have an infrared system on our Unmanned Aerial System (UAS) to respond to vessel fires,” said Elliott.
Morely said that technology has increased in importance, particularly in light of the move toward larger ships and smaller crews. “Technology, such as thermal imaging units and advances in suppression equipment, has become a vital component of fire fighting,” said Capt. Morley. “Incorporating that technology and topics such as advanced methods of ventilation into fire training classes is equally vital. The methods and techniques that were taught when I first entered the industry seem almost prehistoric when compared to what is available today. That is the primary reason refresher training is so important.”

A Growing Emphasis
Mitigating risk in the maritime sector is a necessity. The increasingly litigious nature of the world at large levies stiff penalties for anyone who puts hazardous materials into the sea, and increasingly strict regulations from international and national authorities mean that vessel owners and operators must invest in marine firefighting training and technology to ensure compliance.
“The recent implementation of the U.S. Coast Guard’s Salvage and Marine Firefighting regulations is the primary driver in increasing the importance of marine firefighting training in the United States,” said Elliott.  “When a vessel is at a pier, these regulations require a marine firefighting remote assessment within an hour of notification, an on-site assessment within two hours and trained firefighting teams and external firefighting systems – such as a tug or portable fire pump – on-scene within four hours. For “nearshore” operations, within 12 miles of shore, a firefighting team should be on-scene within 8 hours and, for “offshore” operations, out to fifty miles, a firefighting team should be on-scene within 12 hours. To achieve these response time standards, marine salvors must continuously train and exercise their fire teams.”
Additionally, there is a growing recognition of the hazards of shipboard firefighting and the need to provide advanced training to land-based firefighters, Elliott said. The unique command and control requirements for marine firefighting operations, combined with the number of agencies and stakeholders involved, require specialized Incident Command System training for all parties, including Federal, State, local, municipal and industry responders.
“Ship operators are seeing the importance of having well trained, thinking, doing fire fighters available onboard to respond,” said Capt. Morley. “While regulations have improved their safety, fire is still the number one threat these vessels face. The IMO recognizes that and has worked with member nations to improve the training while at the same time industry is working to improve their policies and procedures, many companies go well beyond the regulatory requirements for fire training.”
In addition, the complexity of ships and offshore structures makes updated firefighting skills desirable for all involved.
“Live fire and emergency response training for the maritime industry continues to evolve,” said Kirk Richardson, Texas A&M Engineering Extension Service (TEEX), Emergency Services Training Institute. “As vessels, terminals, and offshore facilities become more complex, personnel must be prepared to adequately deal with any type of emergency.  Incidents vary from fire fighting, confined space rescue, water rescue, hazardous materials, and others.  In addition, personnel must be adapt at managing the incident, using the appropriate Incident Command structure.”


Investing for the Future
As with any other sector of any other industrial training, a commitment to continual investment in facilities, technology and people is the ante to stay in the marine firefighting training game. New equipment and modern facilities are the rule.
“The emergency response training centers, located in College Station and Galveston, Texas represent more than 330 acres of hand-on training projects and support area, and currently the two facilities are valued in excess of $475million,” said Richardson.
He said that the Marine Training project area in College Station has recently had the Engine Room prop completely rebuilt (including the replacement of the diesel propulsion engine, generator sets, air compressors, boiler front, electrical switchgear and related fuel, hydraulic, and support equipment.) In addition, the vessel superstructure has been upgraded to include new interior compartments, which are used for fire fighting and search and rescue operations. The vessel deck is being upgraded with new flammable liquid and LPG propane fueled props.
In staying current with maritime trends, TEEX operates an LNG live-fueled training project at Brayton Field, which uses live LNG and allows students to observe the safe handling protocols used for an LNG leak and/or fire scenario. “LNG shipping companies and terminals worldwide participate in the training provided, using this prop,” said Richardson
MPT is in the midst of a vast expansion, and over the last two years MPT has invested more than  $500,000 in its Fire Fighting programs, including additional new scbas, new turnout gear, new compressor and cascade system for filling, new technology for the classrooms, and a new Pierce fire engine used in our 1405 course as well as in our IMO programs.
‘Investment’ also means taking care of the treasure trove of gear already in house, as MPT’s Capt. Morley explains. “MPT currently has more than 80 Survivair 4500 psi scba’s equipped with carbon fiber bottles, more than 200 sets of turnout gear, and more than 2000 ft. of fire hose,” just to name a few. “Every student is sized and issued gear for the duration of their training that is theirs alone, and that gear is all cleaned and inspected before being issued to the next class. It’s something simple but maintaining the gear is not only good for the gear, it’s good for the students wearing it.”
Investing in new equipment and training is the mantra, too, at T&T: “T&T Salvage has invested heavily in not only building arguably the nation’s largest deployable marine firefighting capability but also in training our own personnel and contractors,” said Elliott. “T&T marine firefighters attend basic and advanced firefighting courses plus supplemental courses in LNG Firefighting and hands-on equipment deployment and operations training. Personnel also attend infrared and UAS infrared certification courses. In addition to this comprehensive marine firefighting training regimen, all personnel complete Hazardous Waste Operations (HAZWOPER) certification courses; respirator protection/SCBA courses; First Aid/CPR; OSHA rigging and signalperson courses; and myriad other marine related courses to ensure consistent, safe and effective operations. Of significance, all of this training is routinely proven in actual operations and exercised in drills.”

Titan Salvage, now a part of Ardent, completed a complex removal of the wreck of the cape-size MV Smart coal carrier in South Africa. The wreck itself was a challenge, made worse by weather conditions that prevail on the South African coast. The removal of the vessel, which was entered in North P&I Club by owner Alpha Marine, was accomplished on time and on budget due to collaboration with the South African Maritime Safety Authority (SAMSA), Titan and North. On August 19, 2013, the 151,279 DWT bulk carrier ran onto a sand bar shortly after setting sail from Richards Bay coal terminal in a 7m Indian Ocean swell. It was carrying 147,650 tons of coal, 1,769 tons of fuel oil and 129 tons of diesel. The crew was rescued and, a days later the 273 m long ship split into three parts. Smit Salvage, part of Boskalis Westminster, together with Smit Amandla Marine and South African salvor Subtech Group removed the fuel first, achieved without spillage, followed by 10,000 tons of coal slurry in the ruptured no. 9 hold. They then refloated the separated stern section and scuttled it offshore. Titan Salvage won the tendering process to perform the lightening, refloating and scuttling of the partially buried bow section. The contract was unusual because of the extent to which Titan assumed the operational risks associated with the project, so minimizing the chances of a cost overrun. The bow section was refloated and scuttled in December 2014 and the remaining mid-section cut down and buried at the beginning of September 2015, with rehabilitation of the seabed completed immediately thereafter.

VSTEP launched RescueSim, its Advanced Fire Fighting Simulator (AFF) for shipboard incidents, a simulator designed to enable users to experience and train any incident on board a ship first-hand. It is built to fully support and comply to the STCW Advanced Fire Fighting courses. RescueSim includes functionality, environments, emergency equipment and objects that are common to specific types of shipboard incidents and essential for STCW compliant AFF Training.  A typical setup includes an instructor station and training stations for the on-scene commander and fire team leaders.   An instructor is in full control during the training and can influence the scenario for the participants in the simulator during the exercise. Instructors can also build any on board incident scenario using the instructor toolbox. RescueSim AFF simulator can be linked with VSTEP’s NAUTIS ship bridge simulators for additional incident command training of ship bridge personnel.

(As published in the October2015 edition of Maritime Reporter & Engineering News - http://magazines.marinelink.com/Magazines/MaritimeReporter) 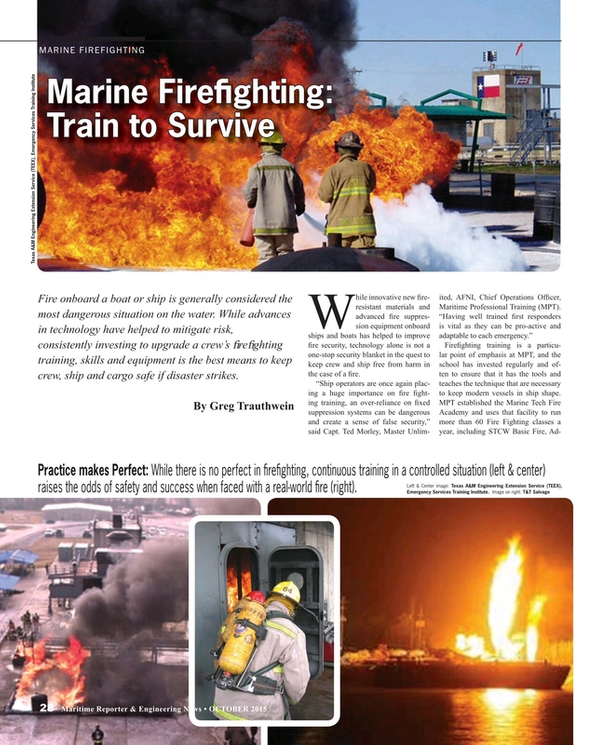