Unmanned Vessels: The Future is Now

There is a global boom in the development of unmanned systems, from below the ocean’s surface to high in the sky to the world’s roads. Add to this list the maritime industry, on both military and civilian vessels. Maritime Reporter & Engineering News examines in depth recent developments taking place in Europe to discover general thoughts and technical trends driving the future of unmanned shipping.

The joint European Research Project MUNIN was finalized in August 2015, a project financed by the EU and initiated by German research institute Fraunhofer Center for Maritime Logistics and Services. Participating partners in the three year project were research institutes, universities and private companies from in eight European countries including Germany, Norway, Sweden, Iceland and Ireland. The concept of autonomous shipping was analyzed both theoretically and through developing practical solutions and technical systems for autonomous operation of a ship. There were many matters under a close microscope, from needed developments in ship-to-shore communications to fully enable autonomous operations, including legal aspects, risks and economics of such systems. The main practical focus was directed at the development of the autonomous control systems aboard a bulk carrier remotely controlled from a shore control center, simulation based and integrating the various functions needed.

A ‘Shore Control Center’ was designed capable of supervising vessels worldwide using electronic nautical charts. Just as within the airline industry, critical situations are monitored both by the onshore operator in charge of that particular sea segment, and by software, both onboard and ashore. The system includes a built-in possibility for outside intervention. The relating ‘Unmanned Bridge’ development included an ‘Automated Lookout System’ capable of conducting evasive actions autonomously and according to international regulations from preventing collisions at sea. An ‘Advanced sensor system’ for this purpose was also developed and tested. A system had been developed to recognize small objects on the water surface and transmits warnings accordingly. A weather routing system providing an efficient and safe journey, common on many ships already today, is a natural part of a future unmanned vessel. Also an ‘Autonomous Engine Room’ was developed with relevant engine functions monitored remotely on multiple monitors. Remote condition monitoring was enabled to predict eventual engine service needs at an early stage, enabling service to be done when the vessel is in port.
With relatively low $3.5 million budget, the MUNIN project achieved the realization of a virtual system which can safely analyze and test unmanned ship operation in a maritime environment where there are also conventional vessels in operation, a likely future scenario. A virtual ocean environment is achieved utilizing also the sea traffic management results from the MONALISA, another EU funded research project. Another outcome from the MUNIN project, presented at Nor-Shipping in Oslo in June by project manager Hans-Christoph Burmeister, is the idea of a similar classification for an unattended ‘Watch-free bridge’ arrangement, to be applied during deep sea voyages, comparable to that of the unattended machinery spaces, which already exists. This would allow for flex-time work by only one or two nautical officers onboard with the shore station taking over the watch periodically. The new SOLAS regulations anticipated in year 2024 should address this.

Global Projects
MUNIN is just one example of an unmanned shipping development project, and there are a number of similar projects initiated on national levels and by maritime companies independently or through industry collaborations.
Norway is looking into an unmanned transportation system with a small size container vessel to handle transportation along its long coastline. This project, called ReVolt, is based on a 100 TEU battery powered vessel operating at a speed of six knots. In Finland a number of companies, including Inmarsat, four universities and the VTT Technical Research Centre have initiated the AAWA Advanced Autonomous Waterborne Application research project, the goal of which is to develop commercially viable remote controlled vessels for commercial use and related technology. The ambitious project is to last until year 2017, and has Finnish Tekes funding. VTT is also coordinating a project on future bridge concepts for tugs, cargo vessels and platform support vessels using same intelligence technologies as will be needed in unmanned ships. In addition to joint projects companies such Wärtsilä, ABB and Rolls-Royce are all involved also with their own developments of technologies which can, in the end, be utilized also in future unmanned ship operations.

Practical Technical Aspects
At ‘The Autonomous Ship’ panel discussion arranged at Nor-Shipping in June, many aspects of unmanned ship operations were dealt with by Martin Kits van Heyningen, President and CEO of KVH Industries, Oskar Levander, VP for innovation engineering and technology at Rolls-Royce Marine, and by Ronald Spithout, President, Inmarsat Maritime, among others. In overview it was generally agreed that ships need to be much more reliable in the future, allowing for predictive maintenance based on detailed monitoring.
When considering unmanned shipping, there obviously is no need for a deck house meaning there will be more space for cargo. Many systems onboard today will become redundant when there is no people onboard. But people will still be needed, both for ship maintenance in ports and for manning the ship control stations ashore. Ship systems will become more standardized, as is the case in the airline industry.
Speakers at the unmanned events of Nor-Shipping pointed out that unmanned shipping will first be seen on smaller local ships, requiring only one Flag state authority to provide permission. Norwegian offshore supply vessels and road ferries were among the mentioned potential early autonomous ship applications.

Technologies needed would first be applied on not completely unmanned cargo ships, moving some functions ashore, using for example remote support with augmented reality helmets, making any person onboard capable of doing complex and advanced tasks. This approach has in fact already been tested in practice by Wärtsilä, in the development of its field service working methods. The company has developed augmented reality goggles, suitable for use onboard ships and offshore rigs where GSM nor Wifi is suitable. The goggles give the user the capability to perform tasks onboard with the system expert providing advice remotely even from the other side of the world.

The obstacles of man-made regulations affecting unmanned shipping operations have been looked into by many. Levander noted that a global effort with international stakeholders coming together and redefine the international regulations and rules, is required. This would naturally come through the next renewal of the SOLAS rules. Dr Vincent J G Power at University College Cork predicted, within the MUNIN project, that an entirely new legal regime will not be needed for unmanned ships, and colleague Dr. Bénédicte Sage-Fuller unofficially predicted that there would be no significant increase in insurance premiums for unmanned ships.

A key technology for unmanned shipping is flawless high-capacity and high-speed satellite communication, which also has to be secure. According to Ronald Spithout, President, Inmarsat Maritime, a cluster of satellite cells for communications is being developed, providing security and redundancy. “A new network is being launched near the end of the year. We will see a completely new way of dealing with traffic signals,” he said, assuring the audience that entirely new technologies currently being developed will be able to meet the requirements of shore communication for unmanned shipping.

Cyber Security
Cyber security is an increasing concern for shipping, and will be one crucial element in unmanned ship operations. Tor E. Svensen CEO of DNV GL Maritime pointed this out at the presentations made by the classification company. He said the costs are coming down for high-speed ship to shore data communication and has given the opportunity to combine different types of data, and to start optimizing the ship and voyage in a quite sophisticated way. This will offer the opportunity for malicious attacks, and attempts to actually control or damage ships or property. The area of cyber security will see a lot more attention in the years to come, addressed in the rules and procedures. DNV GL has been working on formulating procedures for software development and integration, and on testing of control systems and addressing vulnerability to external threat, and has acquired, and is developing further, technologies for hardware-in-the-loop testing methods to assess control systems and their robustness. DNV GL has also been working with the US Coast Guard on building a regulatory framework and in implementing maritime cyber security standards.

We Will see Autonomous Shipping
As with autonomoutly operated cars, there does not seem to be any doubt regarding the future of autonomous shipping. KVH Industries’ Martin Kits van Heyningen noted, talking about the autonomous developments in other sectors - “the SpaceX will soon be flying space station crews autonomously, so maybe the autonomous ship is not that far fetched after all.” At the concluding seminar of MUNIN, arranged in August in Hamburg Germany, project manager Hans-Christoph Burmeister from Fraunhofer CML said “The question is not whether, but when autonomous shipping will become reality.” Wolfgang Franzelius, Head of DNV GL’s Safety Technologies, Maritime Technology and R&D, said “The autonomous ship is feasible and useful, and as far as its operation is safe and secure, it will be accepted and realized.” “Why are we going this way?” asks Oskar Levander from Rolls-Royce. “It is all about making ships more efficient and safe. That is the driver.”

Unmanned Mine Hunter
ASV was enlisted as part of the Thales-BAE consortium to develop and deliver an operational unmanned mine countermeasures system, a program which seeks to offer a low risk, robust and reliable solution into the UK/French Maritime Mine Countermeasures (MMCM) requirement.

The USV capability to be provided by ASV is proven in action through the Halcyon multi-role USV. “Developed from the Halcyon design, the more complex and capable mark II offers greater efficiency, stability and an increased payload capacity” said Dan Hook, Managing Director, ASV.

The program output will be two identical systems for evaluation against several predefined operational scenarios. Following an initial de-risking study, detail design has now begun. This first official stage comprising a design study prior to system build is scheduled to run until the end of 2016. This will also involve working with the end user to define the requirement and place consideration on other external factors. Stages 2 and 3 will include the system manufacture and demonstrations.

(As published in the October2015 edition of Maritime Reporter & Engineering News - http://magazines.marinelink.com/Magazines/MaritimeReporter) 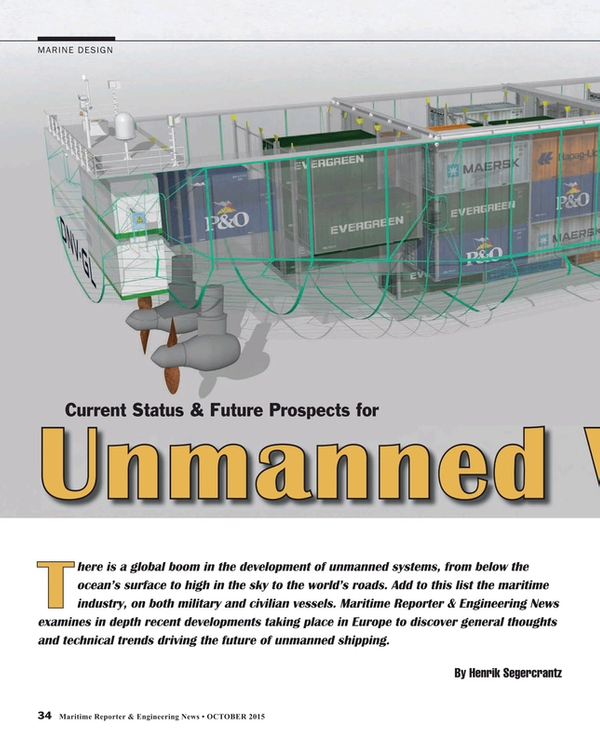