Wondering What to Trim? Look to the skies: billions in offshore savings may be orchestrated from the back office.

For many managers (and analysts), sales, general and administrative costs, or SG&A, are ordinary accounting lines on an offshore services company’s ledger. Less ordinary — less known — is that a sizable chunk of the “A” in SG&A are travel costs that can be better managed. A recent restructuring-focused Deloitte report suggested that SG&A costs might be the wisest costs to shed without thwarting operations. For offshore suppliers, the wisest SG&A costs to shed might just be travel costs.

Examining SG&A for offshore outfits produces some interesting travel numbers, starting with the tens of thousands of people who work offshore and are shunted around the world to liaise and oversee. Whether you’re thinking macro or micro — the globe or your own back office — travel costs in the offshore energy business are staggering. They’re also larger than they ought to be, because most companies order travel rather than manage it.

Hypothetical Vessel: Real Costs
Consider the travel costs of just one drillship off the coast of Africa. Let’s call that hypothetical vessel the Offshore Africa. What are its travel costs? While local crew might only need to travel by helicopter, 45 of the 210 onboard are expat tool-pushers, DP operators, subsea engineers, chief electricians, to name a few, and they would need much more than the helicopter journey offshore. The number of crew trips would quickly reach 90 for flights in and out of area and shifts two-weeks-on and two-weeks-off. The number of round trips soon hits 1,170 (see table 1.0). Remember that number.

So what are those travel costs, and how can they be cut back? We’ve heard operators grill the supply chain and their own staffs for skyrocketing costs, yet apart from the singling out of mushrooming and often duplicate engineering time, there’s little mention of administrative costs. The lack of an efficient travel administration, or travel management, is never mentioned.

If you book online now for the Offshore Africa crew, the cheapest business class ticket round-trip and nonstop between Sidney and Luanda, the drillship’s base, is $7,930. From Houston (one stop) it’s $8,357, and from Aberdeen (one stop) it’s $9,609. The average of those is $8,632 per round trip. Multiply by 1,170 flights and you have a budget of $10.1 million. Remember that number, too. ATPI buys travel for clients using a 100-location global-office footprint, so we pretty much demolish those fares.

There’s also car service and other expenses to get expats safely from the airport to the shore base and their helicopter plus extra expenses for hotels and incidentals. We help clients cut down on those, too.

Offshore Africa
Back to that $10 million for a hypothetical, undersized drillship crew of 45. There are 856 drilling units worldwide, so that would be … $8.56 billion in travel for offshore drilling alone. But, it’s not. Only about half of those rigs are actually in places as remote as Africa from Houston, Aberdeen or Stavanger. Yet, I know one drilling contractor without deep water commitments or remote operations whose travel budget is about $4.5 million.

At ATPI, we like to say that managing travel can cut travel costs by 10 percent and the administrative burden of travel by 30 percent. Consider half of that $8 billion, and the percentages suggest vast potential savings. In costs-conscious Norway — with its rising numbers of locally based worldwide energy industry suppliers — travel management is on the rise, and ATPI’s new Oslo office bears testimony to the new awareness of the savings available in travel management. Customers include drilling contractors, offshore vessels owners, midstream players and a robust supply chain.

For oil independents and suppliers, travel can be 30 percent of administrative costs, or the “A” in SG&A, and for upstream businesses, that can mean up to $2 per produced barrel. This same category of costs can incur a six-percent hit of total expenses, including all expenses for key operations (see Table 2). For medium-sized suppliers, travel can reach 16 percent of SG&A costs.

Savings & Safety
So what does ATPI do to cut industry travel costs? Remember the African Drillship’s “incidental” costs? We have a new partnership with worldwide port agent S5 aimed at eliminating many of those hotel stays and incidentals for travelling expats, be they managers, specialists or crew. If S5 sees that a ship or rig isn’t ready for crew (late, engine trouble, testing kit, diverted to another port, etc.), then ATPI customers — using a travel-management technology interface called ATPI CrewHub — know automatically when not to book travel. Through CrewHub, they also know of expiring Visas or passports, even for multinational crews. Our Duty of Care travel standard is in-line with the industry standard for keeping crews safe (sometimes by extricating them from harm’s way or diverting them out of danger).

So, travel might be the easiest part of SG&A costs to address, and the industry needs to cut costs without affecting safety, stopping innovation or curbing production. At $10 million per hypothetical drillship, there’s about $4 billion in travel costs to target for drilling alone, and drill crews aren’t the only offshore travelers.

Offshore shipping, for one, has similar numbers for some vessels, and they’re some of our best clients. At stake for all suppliers, potentially, are day-rate losses due to absent specialists; cancelled buy paid for hotel stays, plus taxis, accidents, kidnappings, etc., which our Duty of Care and S5 partnerships address.

As for operators, well … If you save on travel, you might be able to drill some more wells or tackle some more projects.


The Author
Dag Kristian Amland is Divisional Managing Director of ATP Instone, part of an ATPI Group that earned over $1.78 billion in travel-management business in 2014. About 40 percent of ATPI’s business is in oil and gas. 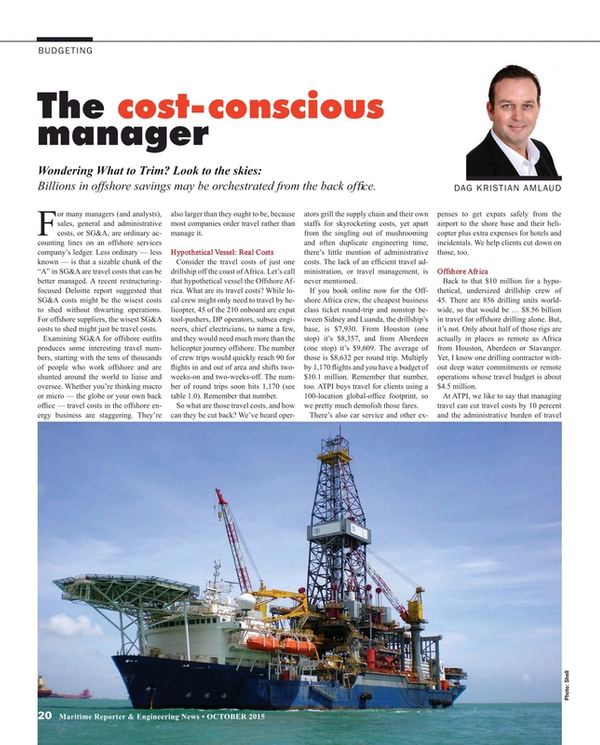