Finland: A Hot-Bed of ICEBREAKER Technology

Finland is a traditional marine tech hub, with almost 90 company members in the Finnish Maritime Industries association. While the country has a storied maritime history across many sectors, based on geographic locale, it’s Arctic and ice marine technology is second to none, and it’s hoping the U.S. Coast Guard is taking notice.


The Finnish maritime industry is hoping to get involved in developing the new icebreakers for the U.S. Coast Guard polar icebreaker program. Ulla Lainio, Arctic Maritime and Offshore Program Director at Business Finland, said that Finnish companies have already been involved in the design of vessels for the U.S. Coast Guard. “We hope that this cooperation will continue in the new projects.” Finnish companies provided extensive conceptual development and design support including hull form development and propulsion line engineering for the icebreaker USCG Healy, and also developed the concept for the Great Lakes icebreaker USCG Mackinaw, which is based on the double acting icebreaking principle developed in Finland, where the vessel breaks heavy ice by going astern utilizing podded propulsion. Arctia’s multi-purpose icebreakers have operated in U.S. Arctic waters transiting through the Northwest passage but also the Northern Sea Route. “Like the U.S., Finland is currently in a process of renewing its icebreaker fleet, providing opportunities for cooperation.” According to Lainio, Finland is the only nation in the world capable of providing solution to the U.S. covering the entire icebreaker value chain. “This covers R&D, design, construction, operation all the way to life cycle services,” Lainio says. She also points out that Arctia could, if needed, also lease icebreakers to the USCG while their new icebreakers are being designed and built.

The Finnish Icebreaker Fleet
Finland has impressive experience in designing, building and operating ice going vessels for all parts of the world. In addition, the maritime industry in the country has always also focused on ice going vessels in their range of systems and equipment development, many projects initiated from the fact that needed technologies simply were not available on the market. A perfect nearby testing field of new ships and systems have been the Baltic, where the Finnish government-owned Arctia Ltd. owns and operates the fleet of eight icebreakers. Naturally the numerous vessels designed and built for the high Arctic seas, as well as the Antarctic, has resulted in a knowledge base not found elsewhere. The latest icebreaker, Ib Polaris, is globally the first icebreaker using LNG as fuel, backed up by MGO, using Wärtsilä’s dual-fuel machinery and three of ABB’s azimuthing Azipod propulsion units. The vessel is capable of performing oil recovery and also for breaking the ice moving sideways. The vessel has proven its capabilities to operate using LNG as fuel for two years.
Arctia is looking to hire its multipurpose icebreakers for offshore operations for oil companies, and for research and cable laying operations in the Arctic and in other waters. “Our angle to any kind of Arctic offshore industry operations is that if it is done, it has to be done safely and we will be there to provide safety and security in the form of ice management,” Eero Hokkanen Communications Manager told Maritime Reporter onboard the icebreaker Polaris in May. Currently there are joint research projects under development. Hokkanen said a project with the US company Global Oceans is under development, and “we have also discussed with Alfred Wegener Institute in Germany.”
Hokkanen expressed concerns about recent proposals in Russia which would result in restricting, on Russia’s Northern Sea Route, western Polar icebreaker services. “We certainly hope that these legal changes will not go through, because we would not be able to operate in the Russian Arctic then.”

Put to the Test
Aker Arctic Technology Inc. runs an ice model basin in Helsinki, Finland. The government-owned Finnish Industry Investment acquired the majority of the shareholding (66.4%) in 2013, while ABB Oy in Finland and Aker Solutions ASA in Norway each have a shareholding of 16.8%. The main services of the company include designing ice going vessels, ice model testing and Arctic related consulting and engineering. Aker Arctic boasts a 76m long, 8m wide ice model basin, as well as an Ice Simulator for training ship operation in ice, in cooperation with the Aboa Mare Training Facility in Turku, which arranges the training in their ship bridge simulators.
With a staff of some 60 people, net sales for 2018 is expected to be approximately EUR13m. According to Petri Tolonen, Director Sales & Marketing, Aker Arctic’s services are typically used from the start of Arctic projects by oil and gas companies or by mining companies considering transportation alternatives from Arctic regions. This was also the case when the Yamal LNG project was started by Russia’s Novatek some 10 years ago. Aker Arctic conducted studies for them on how to transport the gas to the market, helping to determine optimal vessel fleet, vessel size and power and also best port arrangements. The new double-acting icebreaking LNG carriers, the biggest icebreaking vessels in the world, can, according to Petri Tolonen, Director Sales & Marketing at Aker Arctic, transport the gas from the Sabetta terminal independently, without icebreaker assistance, during most of the year. A total of 15 of these 172,600 cu.m. vessel are to be built. Currently there are five vessels in operation and seven vessels have been delivered from South Korea’s DSME. A total of three 15MW Azipod units , provide an icebreaking capability of 2.1m level ice, by going astern. The length is 299m, breadth 50m, and draft 12m. The ice class is RMRS Arc7.
Another recent references includes the concept and parts of basic design of the Ponant icebreaking cruise vessel in cooperation with Ponant and Stirling Design International. The 270 passenger 150m vessel has the high ice class PC2 and is to be delivered by VARD in Norway in 2021. The vessel uses both LNG and MGO as fuel and will be fitted with two 15MW azimuthing electric propulsion units. Capable of operating in ice 2.5m thick allowing it to reach high Arctic regions including the North Pole.
Aker Arctic also did the basic design of the Polar Logistics Vessel for the French Southern and Antarctic Lands administration, the L’Astrolabe, delivered last year from Chantier Piriou Shipyard in France, and of two 24,500dwt Arctic Module Carriers, the Augnax and Pugnax, for transporting LNG plant modules for the Yamal LNG project were built for Dutch company ZPMC-Red Box Energy Services in Guangzhou Shipyard in 2016.

Ice Nav Training
Designing and building ice-class vessels is one thing, keeping the vessels in ship shape is another. That’s where Aboa Mare comes in, a Maritime Academy and Training Center educating maritime professionals including Master Mariners, Marine Engineers, Watchkeeping Officers and Watchkeeping Engineers and offers a wide range of training courses for professional seafarers as well as full mission bridge simulator-based training to shipping companies all over the world, using their ten different bridge simulators, educating annually some 1,500 course participants. Maritime Reporter visited the facility in May. “In addition to the 10 bridge simulators, a complete engine control room (ECR) simulator is provided, with models for medium speed diesel engines, slow speed diesel engines, diesel-electric machinery and LNG fueled machinery, possible to be connected to the bridge simulators,” said Ossi Westilä, Manager of Simulation Training at Aboa Mare. In addition there is one VTS- simulator one Navis DP-simulator and one GMDSS simulator. A recent project is the Arctic Simulator Training Program (ASTP) developing a next-generation simulator for ice navigation courses in Arctic conditions. The simulator provides high-quality training for ship handling, ice navigation training, icebreaker operations and escort towing. It uses decades of ice data collected by Aker Arctic technology. Operation in various ice and weather conditions can be simulated and also maneuverability at sea and in ports as well as various icebreaker assistance navigation scenarios.
The IMO Polar Code is STCW mandatory as of 1 July 2018. The diversified training portfolio in ice navigation training includes Basic and Advanced training according to the Polar Code, as well as training for Baltic ice conditions. The STCW Polar Code courses are carried out in association with DNV-GL. Aboa Mare is also providing ice navigation courses according to the Polar Code abroad, at Giga Mare in Subic Bay, Philippines and at the GMC Maritime Training Center in Piraeus, Greece. “The courses can be varied adding some things needed by the shipping companies. It can be cruise vessels or LNG tankers which should operate from for example the Port of Sabetta, of which we quite a lot of experience,” Westilä points out, referring to Russia’s recently initiated LNG exports from that port on the Yamal Peninsula. Aboa Mare’s ice simulator was used extensively in the development of the layout of that port, in 2013, and in the training of officers from Teekay, Dynagas, and MOL with LNG carriers operating there.
“Another example, the U.S. Coast Guard is looking for new icebreakers and has visited Aboa Mare when looking into that project and in how to arrange the training of their officers. Their challenge is about the same as what we have, because the breaking of the ice in the best possible way is based on experience, and if you have a couple of winter when you do not see the ice, skills and the knowledge becomes less and less. He points out how you can use simulator training to keep up the skills in ice navigation, pointing out that you need to do it in real conditions as well. “But you can come quite close to reality in our simulators.”


Changes in Arctic Ops
Leading themes of the Arctic Council relates to environmental protection, connectivity, meteorological cooperation and education. Mikko Niini is heading the Arctic Economic Council’s  Maritime Transportation Working Group. Priorities at the AEC during the Finnish Chairmanships until 2019 include projects under the three main themes, Interconnected Arctic, Competent Arctic and Safe Arctic. He notes that the global temperature increase is much higher in the Arctic than in other parts of the world. “This trend is going to continue and practically we are already in a situation where only the center parts of the Arctic Ocean is having multi-year ice and most of the ice cover is single year ice. The average winter ice thickness is still up to 2m thick, but recent ships developed can cope with such ice independently. He noted how, due to the political situation, ExxonMobil’s joint drilling project with Rosneft in the Kara Sea is on hold now. “Because of the political situation Russia is now increasing cooperation with China. Chinese drilling rigs have been drilling in the Kara Sea and Pechora Sea of Russia. This is likely to happen also this year.” He said there is a general trend of increased protective actions in Russia with the requirement for domestic content in their projects. “As new icebreaker projects are being developed in various countries, Finland tries to approach the companies and projects as an integrated team through Team Arctic Finland.” 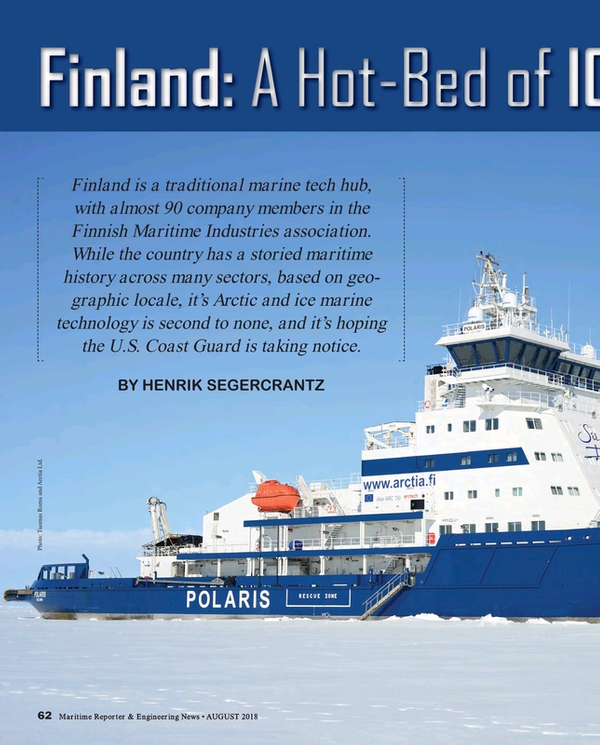