While shipbuilding and ship repair has largely exited the European stage for Far East locales, shipyards such as Oresund Dry Docks in Landskrona, Sweden, maintain a healthy workload. Magnus Malmström, Oresund Dry Docks’ Sales Manager said in a recent interview with Maritime Reporter that Oresund is the largest yard left in Sweden, dedicated to conversion and repair, since 1915. While it was involved in the newbuild business to the 1980s, its business today is dominated by passenger, RoPax and tanker repair and conversion business. Its business has traditionally been regional, but in recent years a concerted effort has been made to venture out to the U.K., Germany and Russia, all the while eying the massive offshore wind parks off of Germany and Denmark as a future lucrative business.
Oresund offers the largest graving drydock in Sweden at 195 x 34 m – build in 1915 – and in addition it offers a 165 x 28m floating dock 800m worth of quays and a 180-tonne crane capacity. The total complex measures 100,000 sq. m., with 35,000 sq. m. under cover.
“This year has been very good, with full docks,” said Malmström. While the yard has looked to expand, he said that local traffic in the area has been the driver this year, and while the yard lost some valuable business during the offshore oil and gas downturn, “there is some light at the end of the tunnel.”
Like many other yards around the world, Malmström said Oresund is waiting patiently for the inevitable surge in Ballast Water Management System refits, but to date is has seen none. “It is surprising, but they will come.”
Like any other yard, investment in facilities is needed constantly, and recently it bought two new cranes for its graving dock. It is currently looking into lengthening its graving dock to accept larger vessels, but this is pending a historical site evaluation, and there is no time-frame for the project.
HH Ferries´ ‘Emission-free’ Ferries
One of the more significant contract wins came two years ago when Oresund Dry Docks was selected to carry out modernization work surrounding ABB’s project to convert two HH Ferries’ vessels into the world’s largest emission-free ferries. M/F Tycho Brahe and M/F Aurora were both be fitted with 4.16 MW of batteries and the containers with the battery racks. Tycho Brahe was dry docked first, followed by Aurora in October 2017. The new battery solution will help lower total emissions across the fleet by more than 50 percent from the current diesel operated vessels. 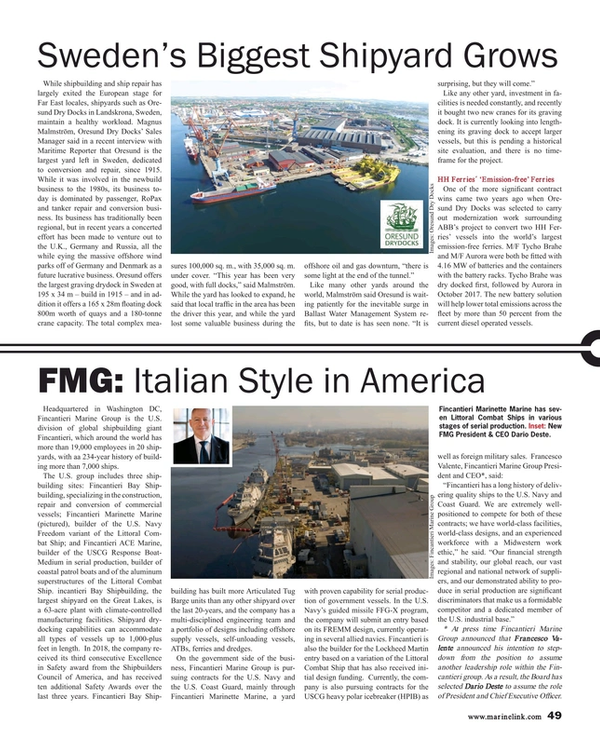